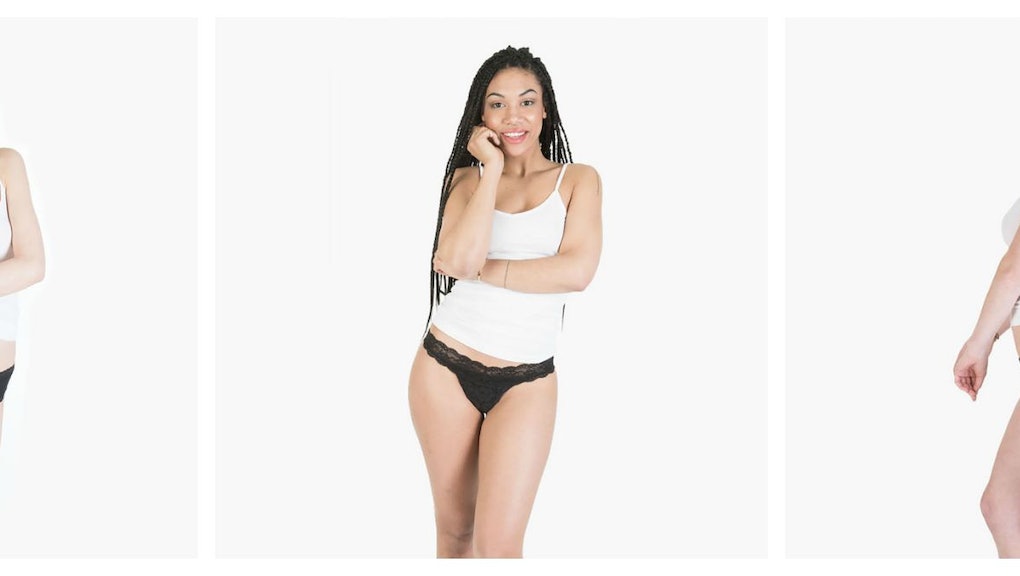 3 Months Later, Here's How These Magic Period Panties Are Selling

"It's been really unreal, to be honest, how the feedback has been. We went viral. We sold out of what we thought would last us a year and a half in less than three weeks," Miki Agrawal, CEO of THINX, the company behind the self-absorbing panties women can wear when they're menstruating, told Mic.

The goal of the underwear, according to the company, is two-fold: Make life easier for women during that time of the month, and empower them by removing the shame and taboos often associated with periods. It comes in three types — thong, cheeky and hip-hugger, each with a different level of absorbency — and uses the company's patented technology, THINX QuadTECH. It works in layers: The first removes moisture, the second is stain-resistant and anti-microbial, the third functions like a pad and the fourth is leak-resistant.

Though THINX, dreamed up by Agrawal, her twin sister Radha and the pair's friend Antonia Dunbar, launched in January 2014, the company got its big break earlier this summer; they broke ground on a new website on May 11 and received a write up in Forbes a few weeks after that. Miki Agrawal jokingly referred to May 28 — the day of the Forbes piece, as well as Menstrual Hygeine Day — as "Thinxmas."

"We're now doing weekly orders from the manufacturing facility just because we're trying to keep up with the demand," Agrawal told Mic. Though she declined to provide exact sales numbers, she noted the company saw roughly 20 times more business in June than they did in May. "We did more sales in one day than we did in the first four months of 2015," she said.

The company's partnership with AFRIpads, a Ugandan NGO that produces reusable menstrual pads, also appears to be making waves. According to Agrawal, the two organizations have helped send over 15,000 young girls back to school. (Girls in Uganda miss up to eight school days each term due to a lack of access to pads, among other things, the Guardian reported in 2014.)

She purchased the hip-hugger and the cheeky, and gave them, as she put it, a "thorough workout." She wore the hip-hugger for 14 hours on a heavy flow day with no leaks or issues; the cheeky, she said, only lasted six hours, but noted it didn't bother her. "Feeling myself bleed onto what are the most expensive knickers I've ever owned was an odd sensation, though," she said.

As for why she purchased them to begin with, the answer was simple, and something many women can likely relate to: ease and comfort.

"I use pads, as I'm uncomfortable with tampons, but you can feel like you're wearing a [diaper]. I don't wear certain clothes, during my period, in case my pad bulk shows. The idea of just wearing [underwear] was appealing — no bulk, and no fear if my skirts blew up unexpectedly — as was the idea of not having to spend so much money on pads each month."

But it hasn't been all positive feedback. A number of Amazon reviews, for example, weren't overly praiseworthy; one reviewer was "supremely disappointed in the 'breathability' of the product," and another criticized the craftsmanship relative to the cost (the panties range in price from $24 to $34).

Regardless of the reviews, however, THINX panties do have at least one thing going for them: They're doing something novel in an industry that hasn't seen a whole lot of recent change. While they may not be replacing tampons and pads anytime soon, they're offering an alternative — and a cute one, at that.