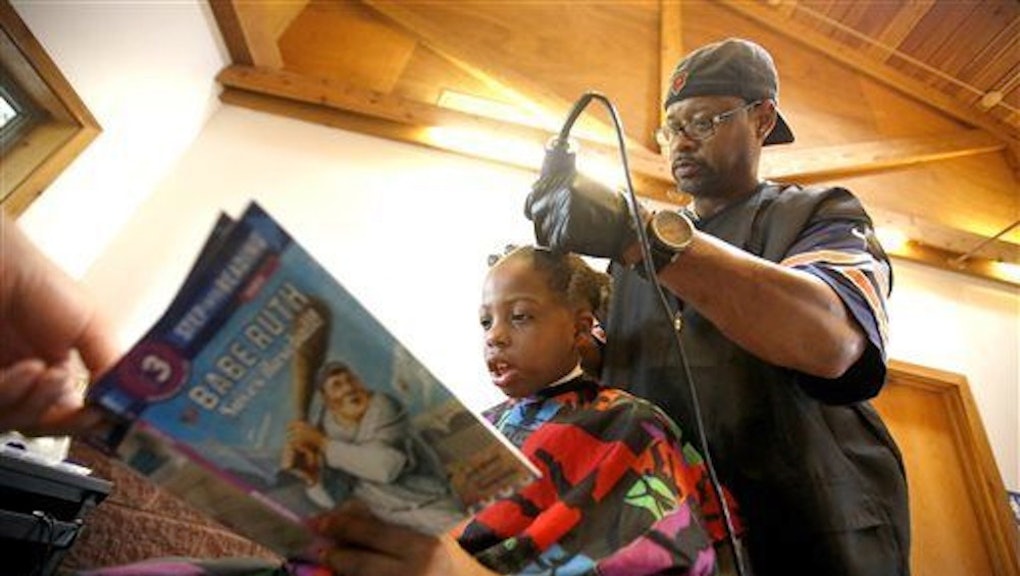 When it comes to reading skills, the United States ranks below 19 other countries, according to NPR. As per the organization Reading Is Fundamental, 33% of the country's fourth graders in public schools read at or below their grade level. But one Iowa barber is doing his part to change that the best way he knows how: He's giving free hair cuts to children who read him a book.

"I just want to support kids reading," Courtney Holmes of Dubuque, Iowa, who offered his services on Saturday during a neighborhood back-to-school event, told the Globe Gazette.

"It's great," Caitlin Daniels, a coordinator of the event who also helped the children successfully make it through their selected books as they received their haircuts, said. "All the kids, they want to have a good haircut to go back to school. They're paying through reading."

Holmes' approach is backed by facts: Practice is "one of the crucial components" to developing solid reading skills, according to the National Education Association. The U.S. Department of Education concurs that the more time students spend reading on their own time, the higher their reading scores.

Holmes isn't just doing his part to give these kids a leg up in their education, but may in fact be helping them avoid far more nefarious and prohibitive life obstacles. Two-thirds of students who cannot read proficiently by the end of fourth grade end up in jail or on welfare, and nearly 85% of young adults who face trial in the juvenile court system are functionally illiterate, according to DoSomething.org.

He's not alone, either. As the Root noted, other barbers across the country have similarly contributed to fighting illiteracy. For example, Reggie Ross of Palm Beach, Florida, replaced the TV and Internet in his own barber shop with books.

"The barbershop is based on men coming together, grooming each other to become better men, and I think books and education is a fundamental part of that," Ross told WPTV of his efforts. "I would love to see more graduation and education to reduce the violence and increase the economics of the community."

Hopefully other barbers and community leaders will follow in Holmes' and Ross' footsteps and offer their skills to help fight illiteracy in kind.