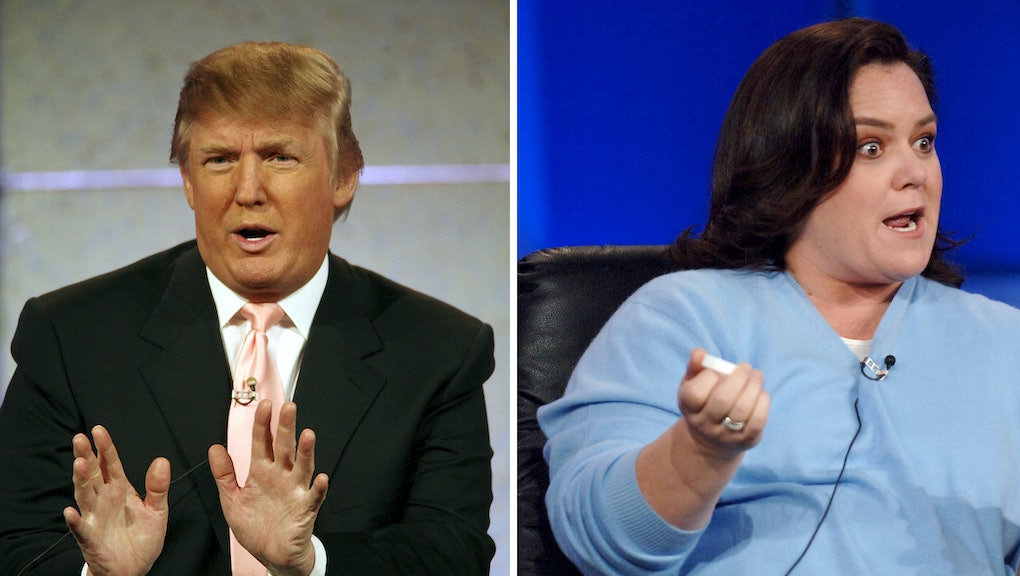 Rosie O'Donnell fired back this week at Republican presidential candidate Donald Trump, who proudly named the female comedian as one of the women he had called "'fat pigs,' 'dogs,' 'slobs' and 'disgusting animals'" during the Aug. 6 Republican debates.

During SiriusXM's Just Jenny on Wednesday, O'Donnell took the time to defend Kiran Gandhi, a woman who ran the London Marathon without a tampon, saying that Gandhi was making a point about the condescending way women are often treated by sexist men. She continued to tell the audience that Trump, who followed up his insults against O'Donnell with a suggestion that debate moderator Megyn Kelly was on her period, is merely part of a larger problem.

"Bigger than any specific people, there is a war on women that is happening in this country," O'Donnell continued. "Women fought for equality in this country, and right now, politically, it's being taken away from us."

"I'd like to take my period blood that I no longer have," she added, "and write, 'You're all a–holes.' I'd like to smear it all over some people's faces."

Last week, Republican candidate Carly Fiorina also weighed in on Trump's comments, labeling them "completely inappropriate and offensive" and adding, "Women understood that comment. And yes, it is offensive."

O'Donnell previously weighed in on Trump during the GOP debates, tweeting that it was difficult to explain his comments to her young children.

According to CNN, the Trump-O'Donnell feud dates back to at least 2006, when the two fought over Trump's refusal to fire Miss USA Tara Conner "after revelations of drug use, underage drinking and sexual activities."