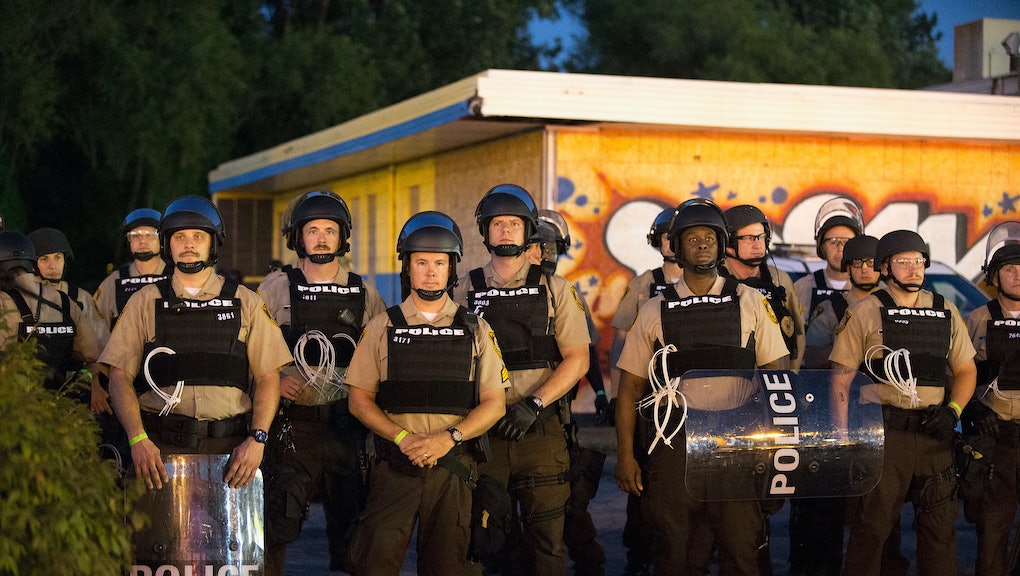 A St. Louis Police Officer Is Bragging About His "Annual Michael Brown Bonus"

An officer who works for the St. Louis County Police Department took to Facebook to brag about his "annual Michael Brown bonus" in an apparent reference to the high-profile police operations and protests that have descended upon Ferguson, Missouri, since the death of unarmed black 18-year-old Michael Brown in August 2014.

The Guardian reports SLCPD Officer Todd J. Bakula, known on Facebook as "TJ Thekoola," used his overtime pay accrued during police responses to the protests to pay for a bicycle trip and overnight stay at a bed and breakfast in Defiance, Missouri, and then showed off the good time he was having on Facebook.

"I decided to spend my annual Michael Brown bonus on a nice relaxing bicycle ride trip to Defiance. Eating dinner now and staying at a bed and breakfast tonight. And heres to my awesome wife for doing this with me while being 18 weeks pregnant," Bakula posted alongside pictures of his wife on a bicycle.

Though Bakula did not respond to the Guardian's request for comment, St. Louis County police spokesman Shawn McGuire told the paper, "The St Louis County police department takes these allegations very serious in every case. The remarks on the Facebook page will be investigated by our department."

According to the Guardian, both the St. Louis Business Journal and the South County Times reported that police overtime and associated costs in relation to Brown's death have reached over $4-5 million.

While Bakula appears to be enjoying his overtime pay, other members of local police forces have been involved in heavily criticized shows of force. Since Brown's death, the Department of Defense has demanded the Ferguson Police Department return surplus Humvees originally obtained under a DOD program. Meanwhile, heavily-armed right-wing "Oath Keepers" brought firearms to Ferguson in anticipation of unrest during the anniversary of Brown's death.

During recent protests on the one-year anniversary of Brown's death, officers and others on the scene were fired at by a gunman.

While nearly two dozen people were arrested in Ferguson on Aug. 10, the Arkansas Democrat-Gazette reported several nights of subsequent peace with no arrests followed, resulting in local police forces being taken off "red alert."

Bakula isn't the first local police officer to be caught making disturbing comments about their role in the community they serve. Former Ferguson police officer Darren Wilson, who shot and killed Brown in August 2014, told the New Yorker that some black residents of Ferguson were "wrapped up in a different culture than—what I'm trying to say is, the right culture, the better one to pick from."