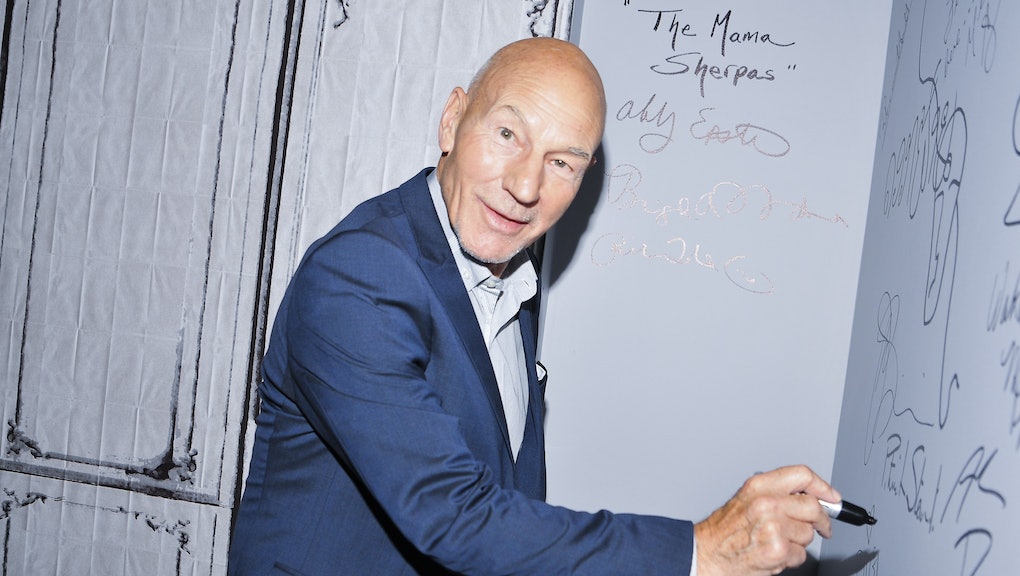 Patrick Stewart Talks Acting and Marriage Equality: "It Is Such a Great Time to Be Alive"

On his new Starz comedy series Blunt Talk, actor Patrick Stewart plays a washed-up, incompetent news anchor barely holding on. His character, Walter Blunt, has good intentions — a loyalty both to his audience and to the people he works with — but he is definitively past his prime. That, of course, makes Stewart's casting all the more against type.

At 75, most actors would be content to take a career victory lap. But Stewart charges forward, working as hard as ever. He speaks with verve and zest about all things, from acting to advocacy. He's the kind of man who declares himself "passionate about Brooklyn" (where he lives with wife Sunny Ozell) without a trace of irony or cynicism.

Stewart spoke with Mic earlier this month, while promoting Blunt Talk, about marriage equality, getting into a Twitter tiff with Anderson Cooper and what it's like to be part of Taylor Swift's squad.

Mic: What drew you to do a sitcom?

Patrick Stewart: One thing, and one thing only, and that thing was [Blunt Talk executive producer] Seth MacFarlane. I'd worked with Seth for nine years on American Dad! and had such a great time. Every couple of weeks, I'd have an afternoon where I would record this amazing program, playing an obnoxious, unspeakable individual called Avery Bullock, deputy director of the CIA. He's English, but everyone who works at the CIA is so stupid they haven't noticed he's not an American.

So Seth said, "How would you feel about doing a live-action, half-hour show with me?" I said yes, and that was the end of the conversation.

Blunt Talk allows its cast of producers on Walter's show to not be masters of their field. They're good-hearted, but they're incompetent. Would you agree?

PS: I love that word, incompetent. Yeah, they are. They're desperately well-meaning and anxious to do their job well. But there is a certain incompetency in the air, which provides us with a lot of our comedy. ... I encounter that everywhere in life. And it's great that this is an aspect of entertainment now, because it's very human and very recognizable.

Walter seems pretty obsessed with Anderson Cooper, bringing him up several times in the first couple episodes. Any reason why him?

PS: Walter would like to be Anderson Cooper. I think he admires him and respects him, his style and success and manner, but sees him also as competition.

Anderson and I had a little run-in on Twitter. I criticized something he said on TV — not harshly, but nevertheless it was a little bit critical. He replied with a rather irritated, though not to say angry, response pointing out how much I had misunderstood what he said. Well, he was right. So I instantly tweeted an apology.

It was another instance where the Internet went crazy, because everyone was saying, "Oh my God, someone apologized on Twitter! That's never happened before!"

It's you and Taylor Swift, the only ones apologizing on Twitter.

PS: Yes, and now Sir Ian [McKellen] and I have this relationship with Miss Swift.

I tweeted something yesterday — in the place that we were filming, they had a big cutout model of Taylor. So I had my photograph taken with it, saying this is the closest I may ever get. But it's fun. I'm only three years into social media, but I find it a fascinating world.

I make mistakes — and boy, do people jump on me when I make mistakes. I made one technical error in the early days, and wham, it came back, "What have you been drinking? What are you on? Are you so stupid?" It is a dangerous world. I liken it to swimming off an Australian beach: It's wonderful and fun and dazzling and exciting, but there are sharks. I joke sometimes on Twitter that the sharks are circling, just waiting.

Other than Blunt Talk and American Dad!, what're you watching on TV right now?

PS: I love Silicon Valley. The actors, the performances; I do some improv, so I work with one of the actors from Silicon Valley. I don't get an opportunity to watch much series television, so I'm in the process of catching up. Three years ago, I started watching Breaking Bad, which, oh my, that's a wonderful drama series. Made me very envious not to have been part of that. And I am now at the very beginning of House of Cards, which is also so fantastic. There is so much great television!

They say it's the Golden Age of Television.

PS: It is a return to a Golden Age, as great writers, great actors and directors and producers, are returning to television. Making movies has become so economically challenging these days. With studios seemingly focused on franchises and big action movies — independent movie-making is not dead, far from it. My career would stumble if it were. But if you're looking for intelligent campaigning of bold, vigorous entertainment, turn on the TV.

You've been very vocal about marriage equality, and at least in America, that battle is won.

PS: It is such a great time to be alive. There are so many fucked-up things in this world, but every now and again, we — and in this case, I would say the president — get it right. It's heartwarming.

In about three weeks' time, there is a very important debate in Westminster on the subject of doctor-assisted dying, which I've campaigned for for a long time. I hope to be there, sitting in the strangers' gallery when this is debated. Like gay marriage and gay parents being able to adopt children, all the normalization of these things that people have fought for and suffered for — [it's great] that there is new legislation that will make doctor-assisted dying possible.

I'm 75. I may need that before too long. I don't want to be forced to go to Switzerland to deal with my condition, or risk getting my family involved with the police. Every now and again, we get it right, and we realize that the world has become a more civilized place. But it often does feel like two steps forward and one step back.

Even at 75, you're still working a tremendous amount. What would you credit your career longevity with?

PS: I love my job. I didn't ever want to be famous, really I didn't. In fact, whenever I did fantasize about it, the idea scared me. I just wanted to work, to be on a stage acting — if possible, Shakespeare. If possible, with the best actors and directors around me that you could assemble. All this other stuff happened by accident.

I'm invigorated by the work I do. ... I've always been drawn to companies, to working with a group of people over a period of time. I like the feeling that the longer you work with people, the better that work becomes. I hope it will continue, which is why I have hope for Blunt Talk, that it will find a life for a significant amount of time.

This interview has been edited and condensed for clarity. Blunt Talk premieres Saturday at 9, but Stewart posted the first episode early on his Facebook page.