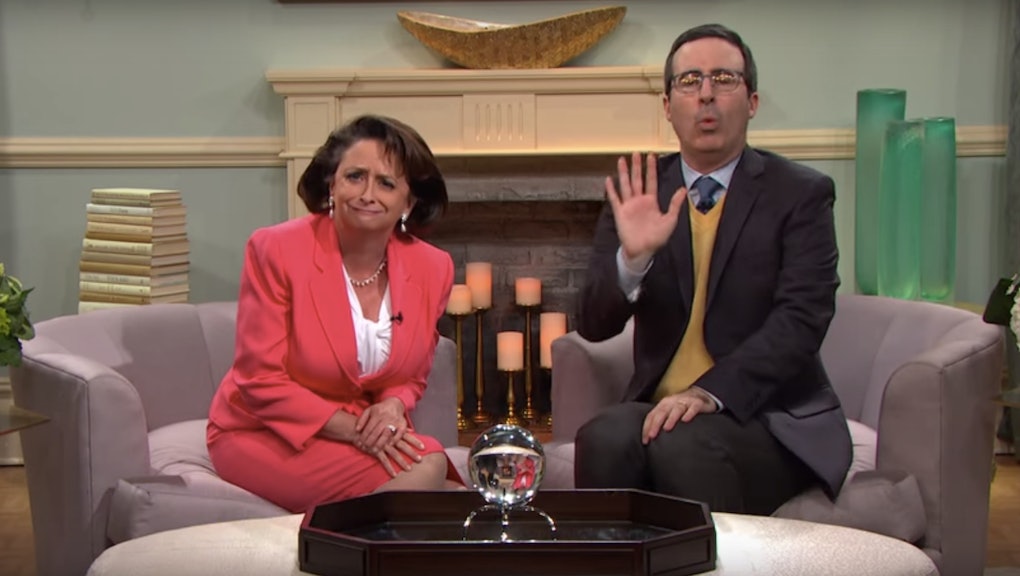 On Sunday, Last Week Tonight with John Oliver ripped into the very American tradition of televangelism. Oliver said while many might think television preachers extolling miracle cures and fabulous riches were a relic of another era, the phenomenon was still very much alive on the American small screen.

The segment begins with an introduction to the "Prosperity Gospel" that lays out the theological foundation of preachers like James Payne, Kenneth and Gloria Copeland, Mike Murdock and Robert Tilton. The gospel preaches that wealth is a sign of divine favor and that donations — particularly those to their ministries — will result in wealth coming back to you.

Often it doesn't matter if that wealth is ultimately used for the very public enrichment of preachers, as was the case of Murdock flaunting his recent acquisition of two airplanes. According to Oliver, the donations often come from those who are least able to afford them.

After a thorough sermon of his own debunking the prophets, Oliver moves on to the very real world institutions that enable their activity, saving his biggest hellfire for the United States' own Internal Revenue Service. The host shows an IRS information video explaining tax laws governing religious organizations. In the video, a senior tax law specialist named Virginia Richardson says, "for reasons as old as the United States, the tax laws and regulations that govern churches and religious organizations are purposely broad and sometimes a little vague."

Oliver took particular exception with the phrase "a little vague," saying the current U.S. rules would allow for almost anything to qualify as a religion, including the church of "bros before hoes" and "Red Vines are better than Twizzlers." In addition to the vagueness, Oliver points out how rarely U.S. churches are audited by the IRS — just one such audit was recorded in 2014, and two in 2013.

After an extended reveal of a seven-month letter correspondence between Oliver and preacher Robert Tilton, Oliver closes his more than 20-minute monologue with a divinely inspired idea of his own: a church called "Our Lady of Perpetual Exemption." The host says he has already filed papers to legally incorporate his new ministry.

As Oliver alludes to, the concept of Gospel of Prosperity preachers would be amusing were it not for the victims of their schemes. When documentary filmmaker Aron Ranen interviewed miracle preacher Peter Popoff and questioned whether he was exploiting the "lonely people" of his audience, Popoff was taciturn before comparing his work to cigarette makers and beer companies. The Atlanta Black Star found at least eight preachers whose net worth was 200 times that of their average parishioner.

Oliver's real-life foray into ecclesiastical affairs bears more than a passing resemblance to Stephen Colbert's own plan to run for President of the United States in 2008. In both cases, the late night hosts sought to up the satire of their subject by actively participating in it.