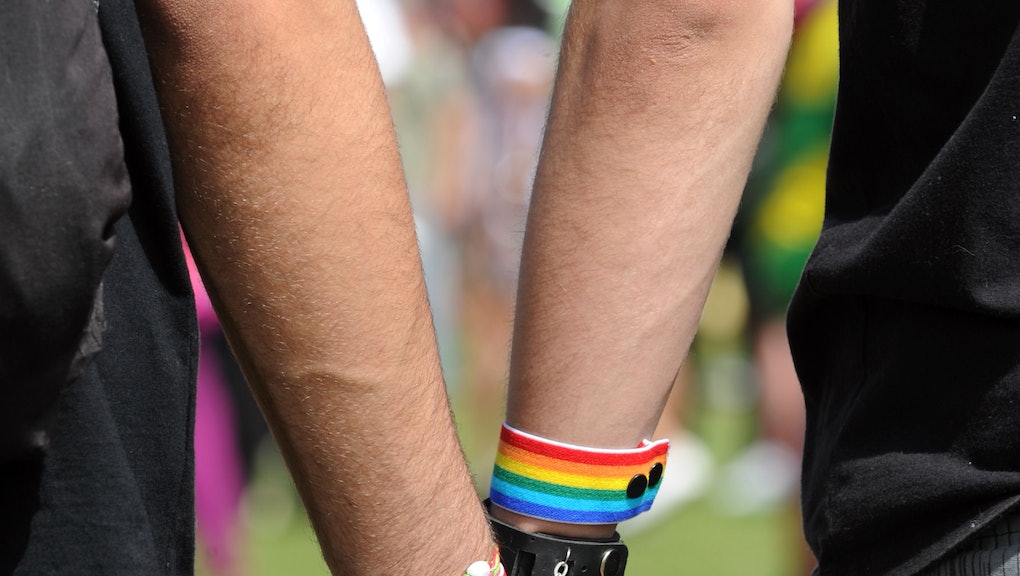 LGBTQ people have hit several markers of progress in recent years, and much of that seems to not just be political (like banning gay conversion therapy and legalizing same-sex marriage), but also quite personal. According to a new YouGov U.K. study, nearly half of young people in the United Kingdom don't define themselves as "100% straight."

When asked "if they could conceivably be attracted to, have sex with or have a relationship with someone of the same sex (if the right person came along at the right time), level 1s were at least 35% more likely to say they could than level 0s," YouGov also found.

What's arguably most interesting about this study, therefore, is not the increased quantity of people identifying as non-exclusively heterosexual, but rather how our attitudes about sexuality have rapidly and significantly changed in a generation. Whereas only 7% of British adults over 60 who participated in the study identified with a varying degree of sexual fludity, 43% of 18-24 year olds did, and 29% of those aged 25-39 acknowledged that their sexuality is fluid to some degree.

Across the pond: While this study on personal identity was conducted in the U.K., U.S.-based research on attitudes toward LGBTQ rights has revealed a similar shift. For example, a Pew Research Center report from July found that 70% of millennials support same-sex marriage, compared to the overall 55% of Americans who support it.

And this support isn't necessarily impacted by other identity-based factors the way it may have been traditionally. For instance, 61% of young Republicans support same-sex marriage, according to a 2014 Pew study. Considering a 1973 University of Chicago study found that 70% of people said same-sex relations were "always wrong," the fact that the same proportion of millennials now support the right to marry for those same individuals to marry indicates radical change.

The numbers don't necessarily reflect more LGBTQ people; this might be the result of more social factors like increased visibility of queer people and better understanding of the nuances of sexuality. Public figures are not only speaking about their sexuality, but being embraced when they do so. When Ellen DeGeneres came out in 1997, for example, she was  overwhelmingly ostracized, and her TV show was eventually cancelled. Years later a younger, more accepting generation has embraced DeGeneres as a fan favorite, while younger public figures like Miley Cyrus and Kristen Stewart public figures tout their own sexual and gender fluidity, reflecting a wider spectrum of identities.

No matter the exact cause, it's encouraging to see that a once demonized and despised identity is increasingly being seen for what it is: human behavior that should be understood and accepted by others and embraced by those who identify with it.