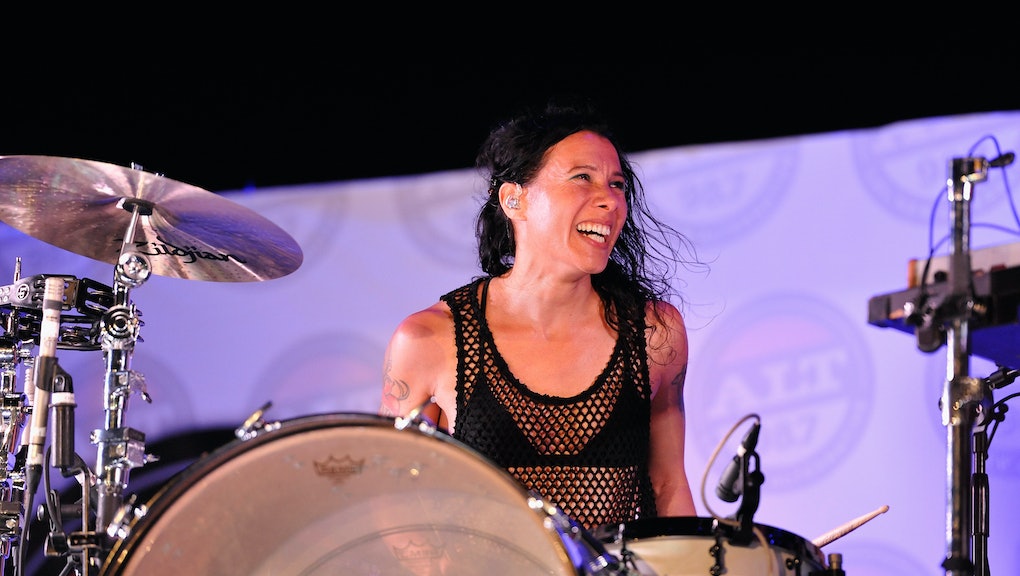 Science Shows Something Surprising About Drummers' Talents vs. Everyone Else's

According to rock mythology, drummers are the Neanderthals on the scale of musical evolution. They don't understand melody or composition. They're only good for two things tops: keeping the tempo steady and coming down hard on the one.

Anyone who knows a drummer knows these stereotypes are bogus. A band is only as good as its drummer. The instrument requires an intense amount of study to master, which makes as musically intelligent and aware as any other musician. They're often incredibly inspiring and contented people.

Yet the stereotypes persisted for so long that several groups of researchers have delved into work to determine whether or not they have an ounce of truth. Unsurprisingly, researchers have found that drummers are complex, conscientious individuals.

However, some research suggests that drummers have internalized the negative stereotypes surrounding their instrument. Though they shouldn't. There is nothing primitive about the drums. The time for vindication is at hand.

The real problem-solvers. We know that drummers are not less intelligent than other musicians. Though research out of Saint Mary's University and McGill University in Canada affirms they may see themselves as such. Far from it. They're actually great problem solvers and analytic thinkers.

Studies out of Karolinska Institutet in Stockholm have shown that there is a link between the brain structure used to keep time and those used to problem solve. Individuals who were better at tapping out a steady rhythm with a drumstick, also performed better on problem solving tests. Researchers also found that drummers had higher levels of white matter in their parts of the brain's frontal lobes, which can which aid one in problem solving, planning and managing time.

They ARE the "real" musicians. The other most pervasive stereotypes about drummers is that they're not "real" musicians; they're brutes who hit things — slight difference. But at the highest levels, drumming requires an understanding of all aspects of music theory, and the levels of coordination and dexterity are as demanding as that required of other instruments, if not more so.

The best drummers have all had an integral understanding of melody, and they would use their understanding to write parts that would complement the most essential aspects of the song.

"The drummer should know as much about the composition to be performed as does the pianist, bassist, and the horn players," Elvin Jones, famed jazz drummer for John Coltrane, Wayne Shorter and Ornette Coleman, once said, according to Drum Magazine. "After knowing this kind of musical information one can then begin to construct and orchestrate a musical drum part that has some substance along with a musical shape to it."

Tony Williams, Max Roach, Jack Dejohnette and Jo Jones — four of the most celebrated names in jazz — were all "melodic drummers." While drums don't have specific pitches per say, their sounds do have pitch relationships. All of the above mentioned luminaries would use these to create melodic "lines," and improvise off them as they played, in the same way a pianist or a saxophonist would, according to Michael Stephens' Experiencing Jazz.

Drum solos can also be quite melodic, as modern drummers like Brian Blade have proved. In interviews, Blade has stressed that drummers need to keep a "deep sense of groove, but also a deep concern with creating melodic motion from the drums, with moving and shaping the music." His solos absolutely prove the value of that.

However, many drummers continue to see themselves through their stereotyped roles. Drummers in a 2014 Saint Mary's University and McGill University in Canada study, reported themselves as being more introverted than guitarists or lead singers of bands. Whether this is a fact about drummer personalities, or merely a snapshot of drummers and singers seeking to fit their stereotypes has yet to be unpacked. However, several studies have shown that the steady beats drummers lay down can engender a sense of cohesion and community among listeners and participants. So, in a way, drummers may create extroverts, whether they're introverted or extraverted themselves.

That same study also showed drummers reporting themselves as less intelligent than guitarists and singers, though as the evidence outlined above would suggest there's little or no neurological evidence to suggest this is true. We need to recognize these stereotypes are merely antiquated memes that have somehow stuck in our collective imagination. Though the act of playing drums may look more primitive than strumming a guitar or fingering keys, drummers should seen as real musicians with real musical knowledge. The more we move away from these stereotypes, the more the instrument will open up. Drummers will perhaps be more motivated to expand their musical vocabularies and integrate more melody and composition into their playing. There have been some incredible songwriters who happen to be drummers first and foremost. Recognize and respect the drums.