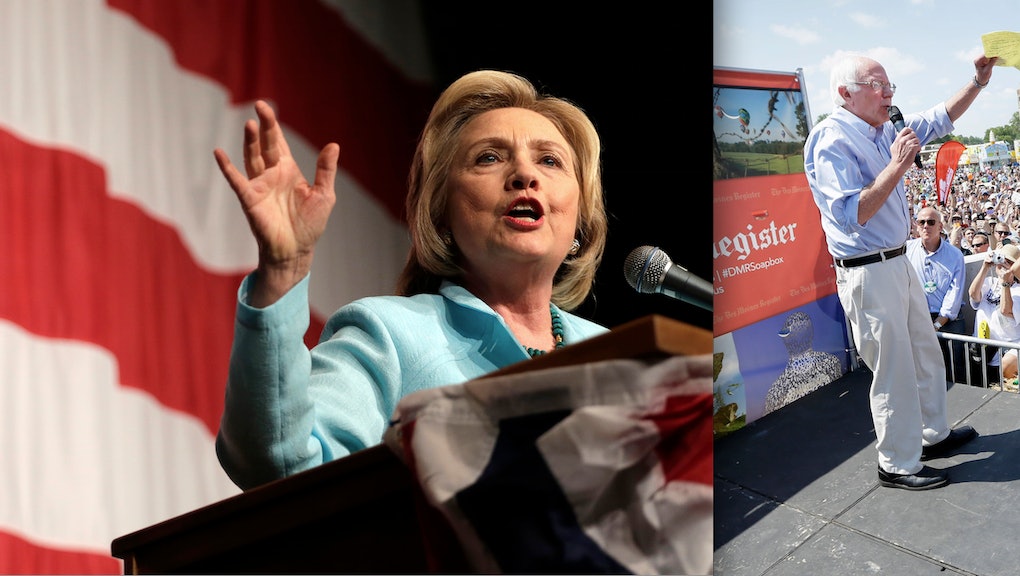 It is a truth universally acknowledged, as a campaign trail Jane Austen might have written, that a candidate lacking a small fortune early must be destined to want for support later on. Perhaps it is so — one of the more effective ways to predict winners and losers in election season is to compare the contestants' bankrolls. Fundraising, more than anything else, measurable or not, is the political pundit's North Star.

For Sen. Bernie Sanders (I-Vt.), the money game is scheduled to be a losing one. He does not, like Hillary Clinton, have a super PAC dedicated to collecting unlimited sums of cash and putting them to use on his behalf. Even as Sanders does well with traditional fundraising, Clinton's operation and haul remain light-years ahead. If dollars decide this primary fight, Sanders will finish second- or even third-best.

Those are the caveats. Here is the argument: Sanders and Clinton are a whole lot closer than the conventional wisdom suggests. By definition, a wave is destined to crest and break. But the tides, belonging to an altogether more complicated science, promise new swells to follow the broken ones. The next rush could be considerably stronger, or it could flatten out. Here are five indicators suggesting the political currents are running in Sanders' favor:

Sanders is on the rise in New Hampshire and Iowa

The Huffington Post poll tracker has been balancing the most recent 2016 primary polling since before President Barack Obama won reelection in November 2012. How far has Sanders come during his brief campaign? Just look below. He didn't register, in part because pollsters didn't ask, until last summer. But over the course of the past 12 months, he's gained steadily, then all at once.

Now, Sanders is in a statistical tie with Clinton in New Hampshire, with one poll from Franklin Pierce University and the Boston Herald showing Sanders with a nominal lead.

Before the Granite State votes, the Hawkeye State holds its caucuses. Iowa has a habit of boosting underdogs — See: Sen. Barack Obama in 2008 — into primetime contenders. It's not a foolproof formula — See also: the last two Republican winners — but victory in the opening contest would change the nature of the campaign and, if history is any indicator, set off mass panic among Clinton's naturally panicky team of longtime friends and patrons.

Sanders is drawing massive crowds — and, for him, that's a big deal

Let's stipulate this: Candidates who attract large crowds on the stump are not any more or less likely to win on Election Day than those who work smaller rooms. (Ron Paul can attest. So, for that matter, can Mitt Romney, who in the weeks before the 2012 campaign routinely drew swollen audiences to his rallies.) The Romney campaign really believed the polls, which showed their guy losing, were off, and often cited those crowds as evidence to this effect. Alas, Obama came out of the election up by nearly 3.5 million votes.

For Sanders, there is a different calculus. With more than five months until Iowa and New Hampshire, the purpose of his massive rallies are not, simply, to get out his message and draw media attention. (To be clear, that stuff is important, but in an age when you can learn a candidate's positions and see him perform "live" online, it's no longer vital.) If Clinton wanted to preside over equally grand festivals, she probably could. But given her national name recognition, fundraising machine and long email list, it's simply not necessary. Sanders, on the other hand, needs the large gatherings to solicit information and, down the road, donations.

By that measure alone, the summer has been extremely kind to the Sanders campaign. Over the course of 72 hours on the west coast, he drew 70,500 people to three rallies in Seattle, Portland and Los Angeles. According to a Washington Post tally, more than 100,000 saw Sanders speak over the course of a few weeks.

The campaign likely returned east with thousands of new additions to its email list — and, with them, a whole lot of new donors to tap.

That's not to suggest Sanders has been hurting to find willing contributors. In the second quarter of 2015, the first in which both he and Clinton were formal candidates, Sanders received donations from 284,000 people, according to his campaign. According to hers, Clinton, despite entering the race nearly three weeks earlier, had only 250,000.

Of that quarter million, nearly 63% of Clinton backers gave $2,700, the maximum allowed under federal election law. Those donors are now sidelined until after the primary. Meanwhile, just over 1% of Sanders supporters are similarly tapped out.

Sanders will never outspend Clinton, but if he can maintain the current pace — a good bet considering the size of his donor base and their ability to give more — the upstart is well positioned to maintain his challenge.

Politicians who want to be popular don't run for office. Even better, they leave office and, to the extent they can, disappear from the debates of the day. Former President George W. Bush had a 22% approval rating when he left the White House in 2009. But after six years out of the spotlight, that number has risen to 52%, according to a June CNN/ORC poll.

All of which is to indicate that well-known political figures benefit from staying out of the arena. Clinton, whose favorability soared after she lost to Obama in the 2008 Democratic primary then gamely accepted a position in his cabinet, is moving in the opposite direction. The speed of that plunge has been dizzying.

Many observers have tied her fall to the growing scandal around her use of a private email server during her time as secretary of state, but it began well before the first hints of potential shenanigans were reported. More importantly, it has already begun to manifest itself in other ways. That recent poll showing Sanders pulling even or ahead in New Hampshire also found a mere 35% of likely Clinton supporters saying they were "excited" about her candidacy.

Definitely maybe! Clinton doesn't need to shipwreck for Sanders to carry on sailing. The likelihood is they both will cruise successfully well into next year. Indeed, Clinton is running an apparently nimble campaign with lots of those famously strategic and preternaturally imperturbable Obama veterans at the helm. If her old friends don't turn mutinous and throw the new crew overboard, she remains the smart money to emerge as the Democratic presidential nominee. But don't go counting Sanders out of this just yet — the old man and the sea might still have a remarkable story to tell.