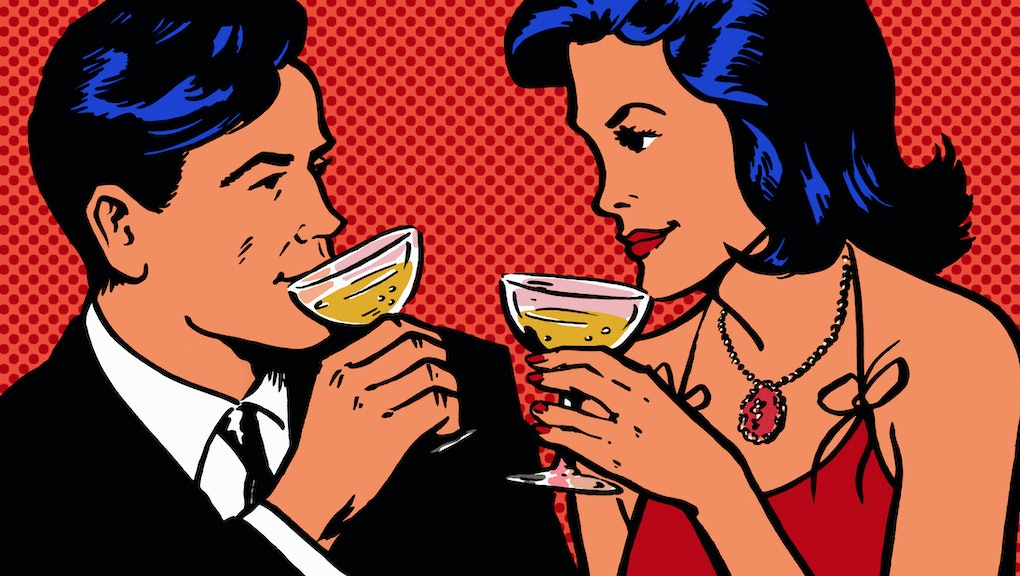 The Simple Secrets for the Perfect First Date, According to Science

Hanging out with a total stranger in the hopes of possibly having sex with them later is generally a pretty awkward situation, so it's no surprise that first dates are often weird as hell. But that doesn't mean all first dates have to be awful. In fact, there are certain things we can all do to scientifically increase the odds of first date success. Whether that means emerging from the restaurant with a new bae in hand or making it home in time to watch Netflix and pop in your night guard is up to you.

Here's what you need to know:

Get there first. Sure, there are some reasons to be wary of being the first to arrive — you risk appearing overeager about someone you barely know. And for the neurotic among us, getting there first is basically akin to rolling out a welcome mat for some ridiculous mental anguish. ("Are people going to think I'm just chillin' here alone? Should I order a drink, or will that then throw off the drink-matching pattern for the entire evening?" And so on and so forth.)

But Garth Sundem, author of the new book Your Daily Brain,  says that sucking it up and being overly punctual has a pretty significant advantage. This is largely because it forces the other person to approach you, which might just trick their brain into liking you more.

"In dating, the very act of approaching something mimics the psychological experience of a choice — approaching is like choosing, and it makes us like the thing we're approaching," Sundem told Mic. "We can see this in speed-dating data: The sex that sits and is approached is more liked than the sex that rotates and does the approaching."

Leave the script at home. Pickup lines and canned conversation might provide a psychological crutch for some anxious (or just lazy) daters. But it's usually easy for people to tell if you're relying on a script — and it's also a huge turn-off.

A 2006 study in which participants watched and rated different first-date scenarios indicated that conversation-starters "involving jokes, empty compliments and sexual references" were poorly received. So randomly saying "You look nice!" is probably not going to do much to revive a withering date.

Laurie Davis, founder of the dating expert website eFlirt and author of Love at First Click, suggests a better approach: Just go with the flow. "If you find yourself at a loss for words while you're on the date, don't freak. Lulls in conversation are natural," she told Mic.

Davis suggests using the little bits of information that you do have about your date — stuff from their online dating profile, things they told you via text before the date, etc. — as conversation starters. When all else fails, you can always take a page out of She's the Man's book and just ask them if they like cheese.

Say some controversial shit. It's easy to fall into the trap of not wanting to come off as weird on a first date, but science shows us that this can actually be a counterproductive way of trying to make a good impression.

"So often when dating, we try to shape our emotions into a middle-positive zone. But dating researchers show that this makes a vanilla, forgettable date," Sundem told Mic. He assured us that even if an opinion is "challenging" to a date, that could actually be good for the chemistry.

"Data shows that this approach is more likely than the gently positive approach to lead to a higher evaluation of the date quality, overall," he said.

Indeed, the Washington Post reported a 2013 study that tracked roughly 1,000 four-minute-long speed-dating conversations and found that many respondents were turned off by "hedging," in which dates used phrases like "kind of," "sort of" and "maybe" — all of which indicate a reluctance to, as Oprah might say, stand in one's truth.

Keep your eye contact and body language game on point. Most of the stuff we're saying to our dates is actually conveyed with our eyes and bodies, which means that eye contact and body language are key. But you might not want to get too carried away with batting your eyes and licking your lips, as you don't want to gross out your fellow patrons: A 2009 study published in Psychological Science found that our nonverbal indicators of interest were obvious not only to participants of the dates, but to third-party observers as well.

The importance of maintaining eye contact on a first date isn't particularly surprising, as psychologists have long extolled the value of serving serious smize in interpersonal situations. However, research also tells us there is such a thing as too much eye contact, so Davis suggests striking a balance and taking cues from your dating partner.

"If you worry that you're staring them down, pay attention to how much eye contact they are giving and mirror it," she told Mic. "It's only too much if your eyes are locked on him or her, and theirs are shifting."

If you like someone, don't hesitate to send a follow-up text. If adjusting your approach to dating according to these scientific findings happens to work out, and you find that you've clicked with someone, then congratulations! You've succeeded in having a non-sucky first date.

Now there's just one thing left to do: Go forth and send that text asking for a second date, without waiting a week or playing any games.

"If you liked your date, make sure that you extend your chemistry to the next day by sending a thank-you text in the morning," Davis said. "It lets him or her know that you had a great time [and] are open to another one." In other words, go ahead and ditch that chill. If you put as much thought into first-date etiquette as we just did, then chances are, you didn't have very much in the first place.