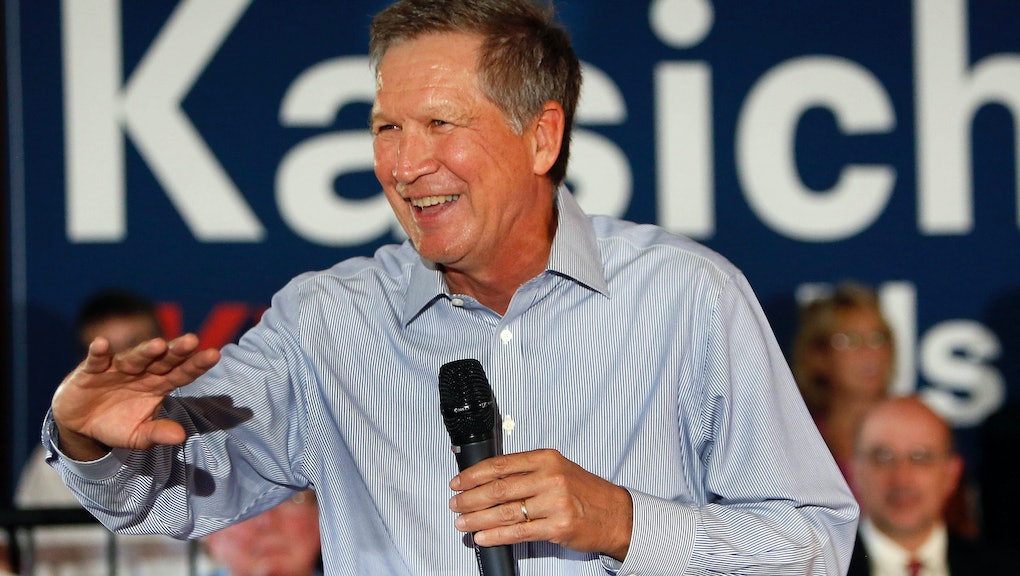 John Kasich on the Issues of Gun Control, Immigration and Student Loan Debt

John Kasich may have recently joined a large and ever-growing handful of Republican hopefuls last month, but the Ohio governor has enjoyed rising poll numbers since his inception into the presidential race.

But Kasich isn't exactly a newcomer to politics just because he signed up a little late for the race. He's served in the House of Representatives from 1983 through 2001, beginning as a freshman congressman, before eventually serving as the 69th and current governor of Ohio.

However, despite a track record that spans decades, Kasich said his views on some issues, including immigration, have changed or, in his words, "evolved." Here's where Kasich stands on the issues:

Kasich has repeatedly said he opposes further restrictions on guns and strongly supports the right to bear arms. His response to the Columbine shootings in 1999 opposed many other politicians who called for tightened gun control. Kasich did vote in favor of a 1994 federal ban on assault weapons, but later backed off his stance slightly, admitting a "cooling-off period" should follow any national gun violence-related tragedy before any new laws are passed on the issue, according to the website On the Issues.

Some of Kasich's most contrasting views on the same issue surround immigration and the deportation of illegal immigrants who crossed into the United States through its borders. "One thing that I don't want to reward is illegal immigration," he told the Columbus Dispatch in 2010. He also called for a comprehensive federal immigration law that would strengthen and protect America's borders.

Four years later, as President Barack Obama announced an executive action that could grant a reprieve from deportation for millions now in the country illegally, Kasich was one of the few Republicans in office supporting the president's move, saying his views have "evolved," and he is "maybe a little smarter now."

"I don't want to see anybody in pain, so I guess when I look at this now, I look at it differently than I did in '10. Because I've become convinced that sometimes, you just got to say this is what we're gonna do and if you don't like it, there's nothing I can help you ... So when I look at a group of people who might be hiding, who may be afraid, who may be scared, who have children, I don't want to be in a position of where I make it worse for them."

Now, Kasich says there should be a pathway to citizenship for the 12 million undocumented immigrants living illegally inside the United States, while the federal government ramps up efforts to strengthen the border. The Los Angeles Times reports Kasich agrees with top-polling Republican presidential hopeful Donald Trump that a wall should be built along the U.S.-Mexico border.

"Finish the wall and make it clear — anybody that comes over that wall once we've done it, you're going back," Kasich said on Face the Nation on CBS. "And to the 12 million here, you know, legalize them but make sure we don't have any of the criminal element here."

If Kasich's state plan in Ohio for college affordability and student-loan debt speaks to his national views on the issues, then his opinion may differ greatly from some of the other top-polling candidates.

Kasich caps universities from raising the cost of their annual tuitions by only 2% in 2016. According to the plan, state tuition in Ohio would freeze for the fiscal year 2017, preventing schools from raising their tuition at all. In February, he signed an executive order to create the Ohio Task Force on Affordability and Efficiency in Higher Education, with the responsibility of streamlining colleges and containing higher education costs.

During his announcement of the nine-member task force, Kasich said:

"Everybody knows — every student, every parent, every university and community college president — anybody who is not living on the moon understands the fact that everybody feels the pressure of rising college and university costs, I don't like to predict the future, but Mom and Dad and students need to know that we are very, very aware of these costs."

Mic reports student loan debt has been growing in America every year since at least 1992, reaching more than $35,000 per average borrower in 2014. Kasich's plan to curb these growing costs in his state could provide insight to how the Republican hopeful would handle college tuition and student loan debt on a national level.