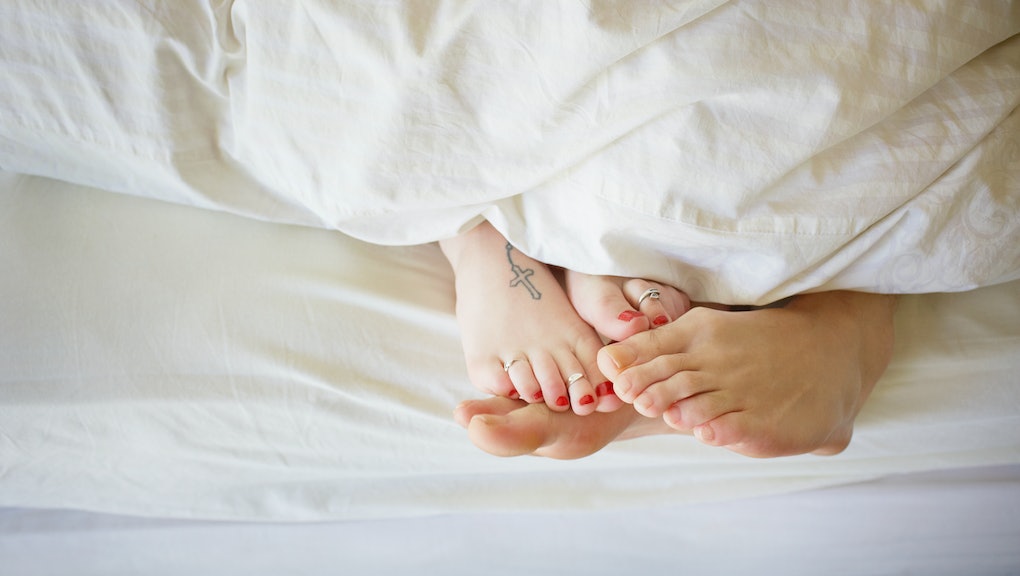 "Picture my pussy like a map of Manhattan," the opening of Entry No. 37 reads. "If I am lying on my back, Central Park can be a 'landing strip' and Carnegie Hall is my clit. From 57th down to 42nd and between 10th Avenue and Lexington is prime real estate. Times Square is, of course, my asshole. We must speak before we go there."

Shining a light on the orgasm gap: The project was founded by Sylvia*, a 27-year-old writer. (Given the taboo nature of the subject matter, Sylvia wants to keep her identity under wraps.) A few months ago, an uninspiring sexual encounter that left her unsatisfied got her thinking about communication — or the lack thereof — during sex.

After relating the experience to a friend, Sylvia realized she'd been much more upfront with her friend than she had with the guy she'd actually slept with. Why was it so hard to discuss the experience with a partner, when it had been so easy with a friend?

"It got me thinking a lot about how to orgasm, and it made me think that the last person you want to talk to about sex is the person you're having sex with," Sylvia told Mic. "If you're a nice person and you consider how the other person feels and you're having an intimate experience with someone, you want to protect their feelings."

So for the benefit of hapless suitors and single female-bodied women alike, she decided to solicit one-page personal essays from women instructing men on how to help them reach orgasm.

"I wanted to create something where people got to share all the things they wanted to say about orgasm and sex and dating, but could not," Sylvia told Mic. "I wanted to delve into the real female orgasm experience."

Real words from real women: How to Make Me Come features 71 personal essays, all from women writing on the subject of how they reach orgasm.

Although all are from women, the submissions come from a diverse array of sources, including queer women and women of color. That said, there may be certain experiences straight women can especially relate to.

"I have my own theories that frustration about inability to orgasm is an exclusively heterosexual problem," said Sylvia. "You're dealing with someone whose anatomy you can't feel, which causes an instance disconnect." Statistics show that this has a grain of truth: A 2014 study in the Journal of Sexual Medicine showed that lesbian women in relationships have more frequent orgasms than heterosexual women do.

The stories are poignant. They're sad. They're outrageous. They're kinda hot. Most importantly, they're revelatory. Even Sylvia said she was surprised by many of the personal stories, including the fact that many women reported coming simultaneously with their partners, or that they had orgasms from penetrative sex alone.

"Because that's something that hasn't been easy for me, I just assumed it was difficult for everyone and it rarely happened," Sylvia told Mic. "But a lot of people don't have any difficulty with that at all. Seeing that a lot of women experience that was surprising to me."

According to 2008 Kinsey Institute data, between 20% and 30% of women have never had orgasms during sexual intercourse. (That number rises to 80% for women who have never had an orgasm from penetration alone.) A recent study in the American Sociological Review said the "orgasm gap" between men and women is even wider for unpartnered men and women: While 80% of single men reported having an orgasm last time they had sex, only 40% of single women reported coming during their last sexual encounter.

With such a wide "orgasm gap" dividing the genders, Sylvia said she wasn't particularly surprised that men are so in the dark.

But while men's rights activists may crow that deceitful women faking it has made hapless men woefully misinformed about what gets women off, Sylvia doesn't think that's the case. If nothing else, How to Make Me Come proves that "it's not that women are faking orgasms. It's just that men are assuming that women are having orgasms, and both parties are too freaked out to speak up."

Sylvia hopes that her male friends will stumble across How to Make Me Come and maybe pick up a lesson or two (she's even considering doing a male version for women, should this project take off).

But her primary focus is the stories of the frustrated women sitting in the dark with their partners, unsure what to do or so, just hoping against hope that they'll wander out of the depths of the Hudson River — or even Times Square, provided there's extensive discussion beforehand — and end up at Carnegie Hall, or 42nd Street, or wherever it is they belong.

This article was originally published on Aug. 18, 2015