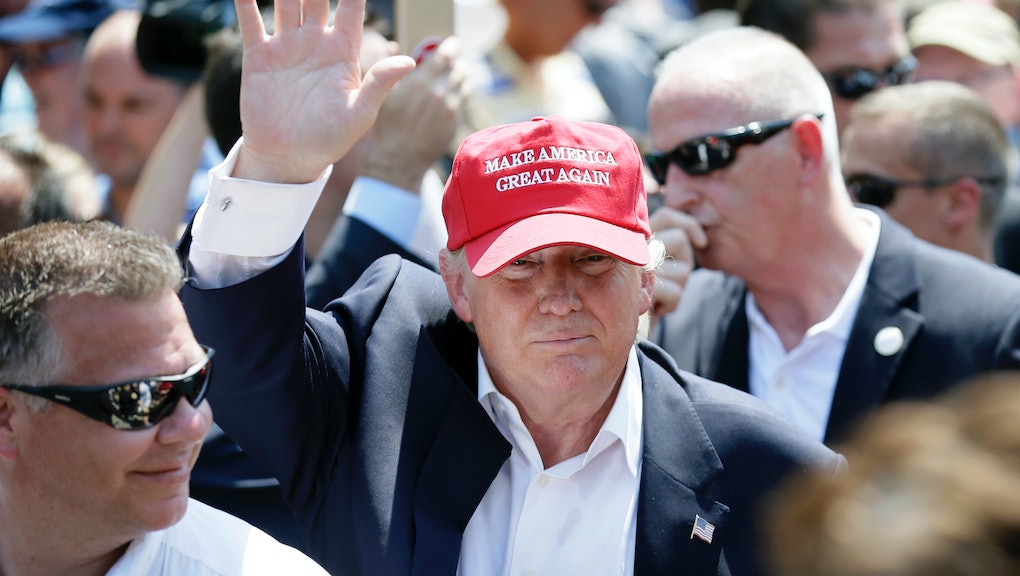 Short of a 16-way blimp accident, there's little chance Donald Trump will emerge from the Republican presidential primaries as the party's nominee. The reality TV billionaire's policies on immigration, however, may end up having much longer legs.

Thanks to the release Sunday of Trump's long-awaited immigration plan, voters and pundits are finally getting a fuller picture of his policies regarding undocumented immigrants, beyond his proposal for a 2,000-mile-long wall along the border. From defunding so-called "sanctuary cities" to the elimination of immigrant-friendly visas, Trump's platform fleshes out an intensively nativist series of proposals that harken back to some of the xenophobic rhetoric of "Know-Nothing" Party in the mid-1850s.

The most extreme of those proposals is the repeal of a key component of the 14th Amendment of the U.S. Constitution. In the blunt vernacular that Trump's fans and foes have come to recognize, Trump's position declares that to "defend the laws and Constitution of the United States," as president Trump would move to "end birthright citizenship." According to Trump, the 147-year-old Citizenship Clause in the U.S. Constitution that allows anyone born in the U.S. to claim American citizenship "remains the biggest magnet for illegal immigration."

Other candidates are following suit. As he strolled through the Iowa State Fair on Monday, Wisconsin Gov. Scott Walker answered a question from MSNBC's Kasie Hunt regarding birthright citizenship by agreeing with Trump's proposal: "I think that's something we should — yeah, absolutely, going forward."

A spokeswoman for Walker attempted to clarify his statements to the Washington Post: "We have to enforce the laws, keep people from coming here illegally, enforce e-verify to stop the jobs magnet and by addressing the root problems we will end the birthright citizenship problem." What exactly this clarification means regarding Walker's stance on birthright citizenship isn't entirely, well, clear, but that didn't stop Louisiana Gov. Bobby Jindal from tweeting out support for the idea as well:

(Confused that Jindal, himself the U.S.-born son of Indian immigrants who would never have attained citizenship under Trump's policy, supports repealing the 14th Amendment? Then you'll love the fact that Trump's own grandfather wouldn't have been able to enter the U.S. under the proposal).

Proponents of repealing birthright citizenship claim that the policy rewards illegal immigration, leading to a strain on American resources. The presence of so-called "anchor babies," or children born on U.S. soil to undocumented parents, allows undocumented immigrants to use their children's citizenship as a shield against deportation.

For the more than 4 million U.S.-born children of undocumented immigrants (as of 2009), the repeal of the Citizenship Clause would be a legal catastrophe, potentially throwing their legal status into limbo. The Supreme Court hasn't looked at the issue of birthright citizenship since 1898 — which means that the only recourse for Trump, Walker, Jindal and their ilk is through the nearly impossible passage and ratification of a constitutional amendment.

For his part, Republican presidential candidate and Florida Sen. Marco Rubio, the son of Cuban immigrants, declared he doesn't agree with Trump's stance on birthright citizenship.

It's the Republican Party's nightmare scenario for the election. Even if Trump isn't the eventual nominee, his rhetoric is pushing the rest of the GOP's field of candidates to unelectable extremes on the issue of immigration. Faced with the demographic reality of an increasing Latino population in the United States, the Republican Party can't afford to alienate the nation's largest minority group much longer.

In 2012, Republican presidential nominee Mitt Romney declared the easiest solution to the nation's immigration crisis would be "self-deportation" for America's roughly 12 million undocumented immigrants. Romney ended up winning a mere 27% of the Latino vote, a demographic seen as key to President Barack Obama's re-election.

If the Republican field follows Trump off the cliff over immigration, the party could become functionally unelectable. Throw in Trump advocating for the use of federal law enforcement to round up and deport illegal immigrants, and the party may lose the Latino vote to the same extremes it has lost the vote of African-Americans.

Trump always posed a risk of dragging down the legitimacy of any candidate around him. The rest of the Republican field could never have hoped to compete for attention with such a legendary showman — but in the interest of money, attention and headlines, they are trying. In the hopes of squeezing in Trump's spotlight, the rest of the candidates are stooping to borrowing his impossible "policies" — with potentially disastrous results.