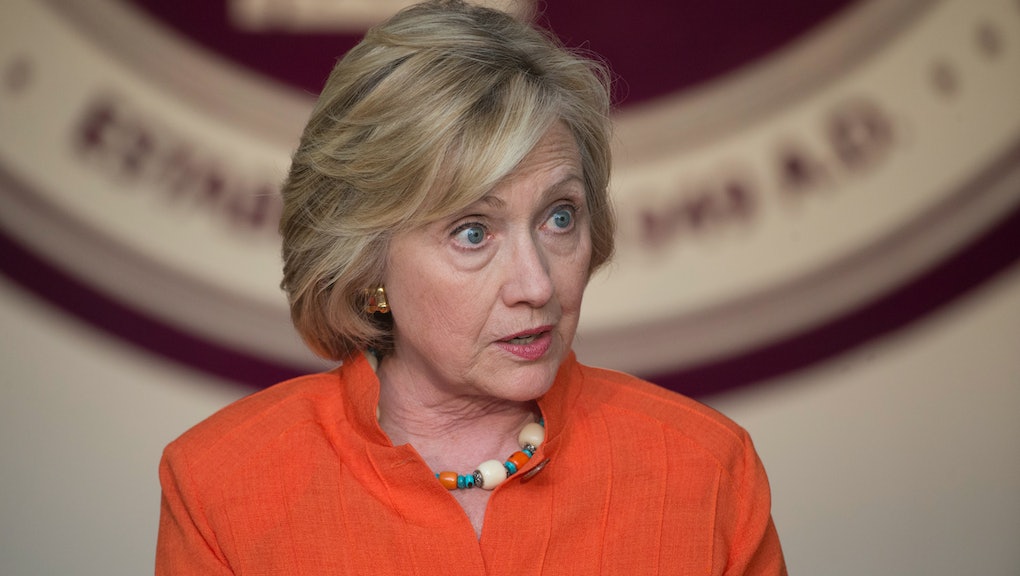 Last week, Black Lives Matter activists from Massachusetts set out to disrupt one of Hillary Clinton's campaign events in New Hampshire, but failed to do so. When they arrived at the event, the activists were told that the room was at capacity and were offered access to an overflow room. After the event, Clinton met privately with the group to discuss their concerns.

On Monday night, Good magazine posted video of the meeting, which captures one of the activists, Julius Jones, challenging Clinton on her spotty history on criminal justice policy and the "anti-blackness current" running through American society. Clinton responded confidently to the points, and admitted that the country needed to be more introspective about its racial history, but asked Black Lives Matter activists to focus on laying out a positive plan for the future.

The video captures a more animated and unrehearsed Clinton than we've seen in perhaps any other moment of the 2016 campaign so far, and the interaction also demonstrated the challenges the Black Lives Matter movement faces as it evolves into a force seriously capable of influencing electoral politics.

The meeting: Good's video footage begins with Jones describing at length his belief that "anti-blackness" is a "founding problem in this country," and how he feels Clinton was in "in no uncertain way partially responsible" for policies that have afflicted the black community. Clinton agrees that there have been problems, but that the way forward was by forming a concrete agenda.

"There has to be a reckoning — I agree with that. But I also think there has to be some positive vision and plan that you can move people toward," Clinton says. "The consciousness-raising, the advocacy, the passion, the youth of your movement is so critical, but now all I'm suggesting is, even for us sinners, find some common ground on agendas that can make a difference right here and now in people's lives, and that's what I would love to have your thoughts about.

Clinton emphasizes that the power of the movement's diagnosis of American racism would mean little without policy demands.

Later on, the exchange takes a turn in tone.

"I stand here in your space and I say this as respectfully as I can, 'If you don't tell black people what we need to do, then we won't tell you all what you need to do,'" Jones says.

Clinton interjects to explain that she was trying to tell the movement to tell politicians what to do, but then Jones carries on. "What I mean to say is, this is and has always been a white problem of violence," he says. "There's not much that we can do to stop the violence against us."

Clinton raises her voice in response: "Respectfully, if that is your position, then I will only talk to white people about how we are going to deal with the very real problems."

Jones tries to clarify his point. "But what you just said was a form of victim-blaming," he says. "You were saying what the Black Lives Matter movement needs to do to change white hearts is to..."

She concludes the back-and-forth with Jones by explaining that the movement needs to do something more than change hearts:

Earlier in her career, Clinton supported a harsh criminal justice system and lobbied on behalf of the 1994 crime bill, the largest crime bill in history, and a policy that played an influential role in accelerating mass incarceration in the 1990s.

But she has since changed her tune. Her first major policy speech this year centered on ending mass incarceration and addressing the epidemic of police violence plaguing black communities across the nation.