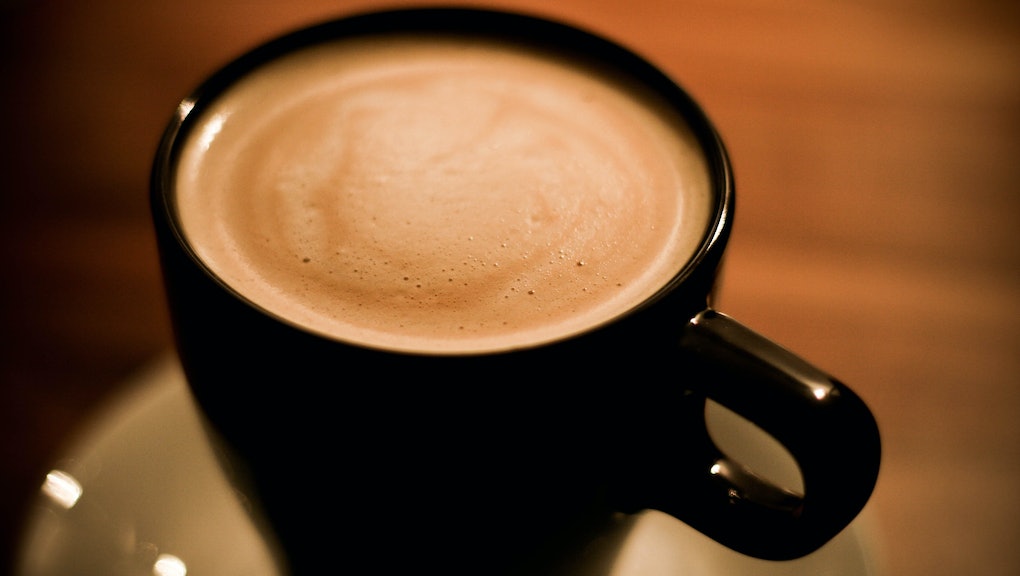 Science Shows Which Caffeine Option Is Least Destructive to Your Health

If you're reading this between the hours of 9 a.m. and 5 p.m., there's probably caffeine in your system. Maybe it's coffee to jumpstart your work day, or a Red Bull to stay focused while you're exercising. Either way, you need more energy than you've got. What do you reach for?

Green tea is the best choice for your body.

If you're looking for the most healthful option, it's not coffee. Green tea gives you energy but cuts out caffeine jitters with an relaxation-inducing amino acid called L-theanine and contains antioxidants, which may help fight cancer. But it also has low caffeine content, and if your morning pick-me-up is a triple americano, tea's extra benefits won't keep you from wanting a nap. It may even compel you to grab a tiny bottle of some syrupy caffeine juice in desperation.

But before you drink, you should know what those cans, bottles and cups are doing to your body. Just because it's on the shelves doesn't mean it doesn't come with its own set of problems.

Be careful what you consume. "Anything on the market called a 'supplement' has very little in the way of regulation," Dr. David Seres, director of medical nutrition at the Institute of Human Nutrition at Columbia University Medical Center, told Mic. "There are herbs and things that have been pulled from the market because of manufacturing problems, and over time there have been numerous instances where people were being harmed."

Which caffeine options are the best and worst for your body? What should you permanently avoid? Read on.

Just because it's on the shelves doesn't mean it doesn't come with its own set of problems.

Coffee is fine too — in moderate doses.

For the most part, coffee is fine, and can be beneficial to your health, according to a 2012 study in the New England Journal of Medicine. Research suggests it's even better for you if you're drinking cold brew. Yet aside from the rare but still existent possibility of a caffeine overdose, coffee, especially crappy coffee, comes with some red flags. It's been known to increase symptoms associated with anxiety and trigger irritable bowel syndrome and acid reflux.

The No. 2 reason: Its laxative qualities can evacuate your guts before the food inside has had the chance to be absorbed, according to rheumatologist Dr. Coburn Hobar. So if you're spending lots of money on organic foods, chances are you aren't even getting their benefits if you pair them with coffee.

"For my clients, I say two eight-ounce coffees a day, maximum," Stacy Moutafis, personal trainer, nutritionist and owner of SM Fitness, told Mic. "If you're looking for more than that, you should be looking into your sleep or training protocol. You probably aren't resting enough."

Red Bull and energy drinks don't exactly give you wings.

Like Monster or Rockstar energy drinks, Red Bull is promoted as a magical elixir that propels you to new physical heights, an accessory to the "extreme" lifestyle of skateboarders and dirt bikers. But the diuretic effect that comes with energy drinks makes it a miserably bad option for any activity that will make you sweat, since it will cause you to lose water much faster than usual. According to Kathleen Miller, a senior research scientist at the Research Institute on Addictions at the University at Buffalo, combining energy drinks with heavy exertion can leave you severely dehydrated.

"The general public, in many cases, doesn't really get the difference between a Red Bull or a Monster on one hand and Gatorade on the other hand," Miller said, according to the Huffington Post. "And they are doing the exact opposite things. Gatorade or Powerade, those are designed to rehydrate and bring back electrolytes into the system. They are designed for use with exertion. The others are really, really good things to avoid under the same circumstances."

The little cans are also packed with sugar — about two tablespoons' worth — and can lead to obesity, increasing the risk of developing diabetes.

A particularly scary FDA report showed adverse effects reported from using energy drinks, and it includes almost every drink you'd see on shelves. One of them is the energy drink's little, unassuming brother, the energy shot.

Shots like 5-Hour Energy aren't giving you all the facts.

The little red bottles dominating convenience store-counter real estate aren't jam-packed with heart-stopping caffeine. 5-Hour Energy shots hold 200 milligrams of caffeine — a couple cups' worth of generic coffee, and less than a tall Starbucks brewed coffee. But energy shots should give users pause for a few reasons. It's unclear how fast they kick in, and the packaging includes a warning against use by anyone pregnant or under 12.

What you get is a mood-altering, cocaine-like mega-shot that a 12-year-old can buy at a 7-Eleven.

According to the New York Times, 5-Hour Energy was included in roughly 90 filings with the Food and Drug Administration between 2009 and 2012. Those claims included heart attacks and a miscarriage — enough to raise some eyebrows.

Even worse, they're filled with sketchy ingredients you don't recognize.

Aspartame, Yohimbe, ephedrine, DMAA. The longer the ingredient list, the more likely the drink will have some gnarly additions. For instance, a product called VPX Redline includes 240 milligrams of caffeine, which isn't high, but it also has something called Yohimbe, which screws with your blood pressure; an occasional antidepressant called 5-HTP; and a couple -tines and -mines without much information about their effects.

What you get is a mood-altering, cocaine-like mega-shot that a 12-year-old can buy at a 7-Eleven.

Seres wrote in a 2014 CNN op-ed, "Supplements, which include substances such as vitamins and herbs but can also include hormones and other pharmacologically active ingredients, can impact the effect and safety of various medications and alter our body's physiologic functions."

Maybe the most recognizable ingredient is aspartame, an artificial sweetener found in sugar-free products. According to Seres, the studies on the effects of aspartame are either inconclusive or come from less-than-trustworthy sources. But that doesn't keep some manufacturers from steering clear.

"I use all our products, so I don't ever want to include aspartame in them," Don Gauvreau, the CEO of supplement company PharmaFreak, self-described as the world's strongest supplements, told Mic. "Most athletes and bodybuilders understand that overall health is very important to the results they can achieve, so the smart athletes will definitely stay away from it."

Aspartame shows up in a ton of common drinks. Coca-Cola Zero, Pepsi Max and Red Bull Sugar Free all contain it, and many more — Monster, Xyience, Sobe, Rockstar — contain Acesulfame potassium, or Ace-K, and Sucralose, better known as Splenda.

If you subscribe to a "whole-foods" lifestyle, you shouldn't consume anything that contains unnaturally occurring chemical caffeines. Scientifically speaking, aspartame's negative effects may be overblown; they're often demonstrated in cases where people consume extreme amounts of soda. But if you look at the serving sizes of soft drinks on the market, or the 32-ounce Monster Energy "BFC," that concern is disturbingly real.