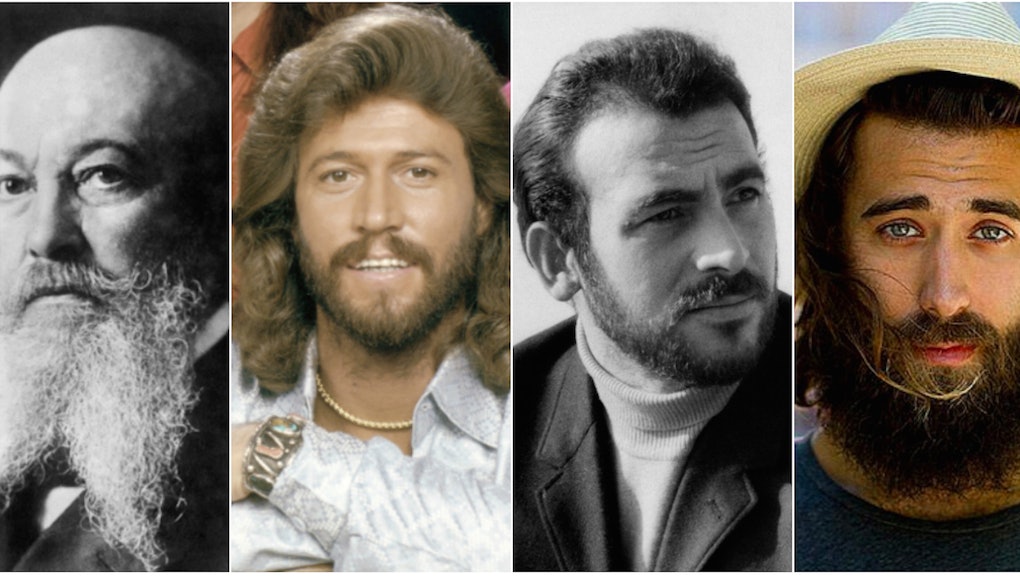 Beards seem to be having a moment.

But really, they've been having one for years.

The recent facial hair enthusiasm might give the impression young men have just discovered beards. But facial hair isn't a modern novelty — there's always the question of how to shape what we've got. Trends cycle in and out, as any photo of a Civil War general will remind you. The latter half of the 1800s was a beard bonanza, while in the 1920s, beards became rarer and rarer (thanks, in no small part, to the introduction of commercialized shaving razors by Gillette).

By the 1950s, the number of men with beards was at an all-time low, only to be revived by hippie culture in the late 1960s and 1970s. By then, businessmen were growing beards — as evidenced by the facial hair evolution on Mad Men — only to morph into those regrettable goatees of the late '90s-early aughts.

Check out the photos to see how far our faces have come.

The early 1850s was a time of restrained elegance and style; by the 1880s, beards were everywhere. A beard signaled masculinity and health, and there were endless varieties. Some beards precariously off the bottom of men's faces, while some came with mustaches (something Gen. Ulysses S. Grant and Gen. Stonewall Jackson could both agree upon).

Think about it: Gatsby didn't have a beard. In the 1920s and 1930s, beards were no longer counted among trendy facial hair. By the looks of archival photos, mostly men of a certain age wore beards.

Facial hair was still a pretty uncommon during that time, but the goatee made its way into popular culture by way of counterculture movements like the beatniks and influential jazz musicians in the '40s (including Dizzy Gillespie, one of the only men who made a soul patch look good).

By the 1960s, beards were a symbol of creativity and rebelliousness.

A clean-shaven look was still popular in the early 1960s (again, see the early seasons of Mad Men). There were, however, some beard trends, like the goatee and scruffy beard. But judging by archival photos, they were worn mostly by creative types like writers, filmmakers and revolutionaries like Che Guevara. Definitely not a style for the office.

With the rise of hippie culture and disco in the '70s, full beards made a comeback.

In the 1970s facial hair and men's grooming were more varied than before. Hairstyling wasn't just for women and men generally embraced a more hairy look overall. The influence of bands like the Beatles and Bee Gees also can't be ignored. Overgrown beards were in style but mustaches reigned supreme.

The rise of '90s alternative bands brought with it goatees and soul patches.

Men embraced a clean-shaven look in the decade after the '70s, thanks in part to the rise of corporate culture and political conservatism. There were certainly the occasional and iconic mustaches (think: Tom Selleck in Magnum P.I.) but a full-on beard wasn't in style in the workplace, forcing many to adopt baby smooth skin.

That all began changing in the early '90s when popular alternative bands became more mainstream. Musicians in bands like Nirvana, Anthrax and Everclear wore a range of facial hairstyles ranging from the soul patch to dyed beards.

In the early 2000s, things got a little scruffy and patchy.

After the soul patch of the '90s, a hybrid of the goatee and scruffy beard look became more popular. Celebrities like Keanu Reeves, Matt LeBlanc and Colin Farrell grew beards that evoked a nonchalant attitude. The extra-shaggy goatee remained popular also thanks in part to stars like Brad Pitt and Johnny Depp.