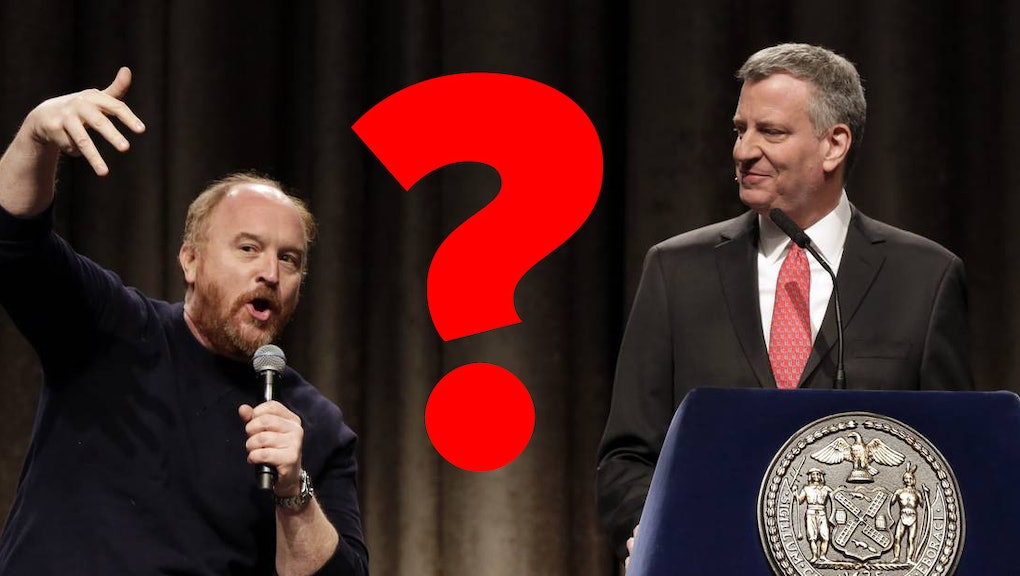 Democratic New York City Mayor Bill de Blasio may have just received a surprise endorsement from the king of comedy.

A caller to WYNC's "The Brian Lehrer Show" identifying himself as "Louis in the Village" (pronounced like Hughie Lewis and the News) delivered a cogent defense of the mayor on Tuesday, saying, "I really like this mayor, and it's bothered me that there's sort of a culture of clickbait in the news right now, that only little negative stories get attention." The Louis in question unmistakably sounds like famed comedian Louis C.K.

"Louis in the Village" said that the mayor, who is facing controversy after news broke that he went to the gym during a violent police standoff in which a Staten Island firefighter was shot, is unfairly targeted by the media for "little pointless gaffes."

You can hear C.K. — or his eerily similar-sounding doppelgänger — in the clip below, starting at around 18 and a half minutes in:

"You want a guy or a woman who just does good and then moves on to the next thing. But the press today, they don't make any money [on] articles about, 'Look this job number's up.' They make money on articles about, 'Hey, look at this little pointless gaffe that the mayor did,'" remarks the caller.

"Louis in the Village" was defending the mayor against these kinds of reports:

The WNYC staff subsequently posted a tweet expressing surprise that the celebrity apparently took the time to call in.