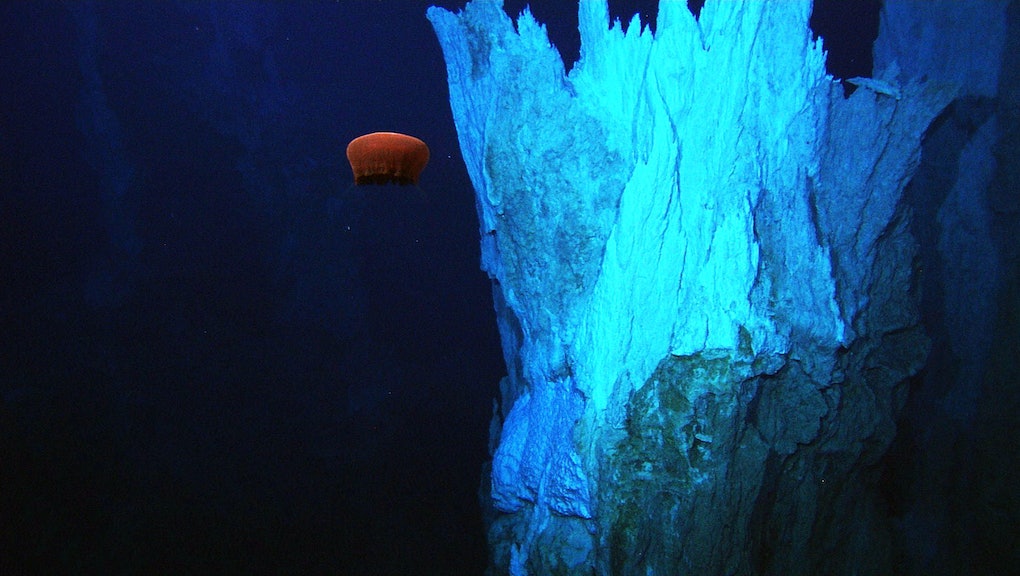 New science from NASA's Jet Propulsion Laboratory may finally have an answer to a question billions of years old: Where did life come from?

The study, led by Laura M. Barge and published in German science journal Angewandte Chemie, demonstrates how vents on the ocean floor can generate enough electricity to power a small lightbulb. It was a eureka moment, one that seems to support a theory first formed in 1989: that these ocean floor vents were the source of an electric zap that may have shocked the first life on Earth into existence, like a miniature version of Frankenstein's monster.

The research seems to run contrary to the religious theory of intelligent design. Life may have begun with a spark — but if so, it wasn't divine. It was a tiny but constant jolt of electricity on the ocean floor, the result of organic chemistry.

The study is the latest update of the submarine alkaline hydrothermal theory, a concept first formulated in 1989 by NASA's Michael Russell. He spoke to Mic about his process.

Identifying the origin of life: To try to prove the theory, Barge and Russell's team recreated the chimney-like chemical gardens found on hydrothermal vents. The chemical structures, as Barge said in the JPL press release, "can act like electrical wires on the seafloor."

The study was conducted in a JPL lab called Icy Worlds, where most of the research revolves around chemical disequilibrium (how chemical reactions keep creating energy and pushing progress in one direction instead of reaching balance) and the relationship between the seafloor and the ocean, as on Earth, and the seafloor and the icy shells of alien planets and moons.

Here's what one of those gardens looks like in nature:

And here are the versions recreated in the JPL lab:

"We're harnessing energy as the first life on Earth might have," Barge told NASA.

To understand our origins, you have to consider life's smallest components. "Start with carbon dioxide," Russell explained to Mic. "Everything, from the breakfast you ate this morning, started as carbon dioxide."

The hydrogen vents, both natural and lab-created, work like a perpetual motion machine, spitting out fuel in the form of hydrogen and methane. The fuel combines with carbon dioxide to make molecules, like acetate. From there you get amino acids, the "building blocks of life," which eventually evolve into proteins.

Then, the theory goes, evolution kicks in, launching these early signs of life into becoming bigger and bigger species — single-cell organisms, insects, ocean creatures, fish, amphibians and so on, all branching off into their own hemispheres of the animal kingdom, until we reach humans millions — if not billions — of years later.

So how did life get started in the beginning? Imagine the ocean as a living, breathing organism, inhaling Earth burps for thousands of years at a time. On the ocean floor, vents release necessary building blocks of life. They bubble for about 3,169 years each, a huge amount of time for molecules to interact with one another.

Acting like "a factory," explained Russell, the ocean combines these building blocks with the gases in the water and, with that one-volt jolt from the Earth, generates the beginning of the evolutionary scale.

Russell isn't the only scientist with a theory about the origin of life. Scientists began to debate the topic in the 1920s and '30s, when a Russian biochemist named Alexander Oparin suspected that organic molecules rained down from space and organized themselves into life.

To Russell, this theory is "absolutely nuts in my mind. Suppose those molecules were red bricks. That's not going to make a house."

In the 1970s, two geologists named Jack Corliss and John Edmond began exploring around the Galápagos Rift, finding organisms like a giant tube worm, leading them to suspect that these warm springs acting as an ecosystem full of new creatures could be the site of first Earth life.

One skeptic was famed chemist Stanley Miller, who argued that the vents Corliss and Edmond found were probably something like 350 degrees Celsius, which is way too hot to trigger life. Miller's response was published in Nature, and Russell wrote to argue that there were other, cooler, gentler springs. "Therefore maybe life started at these," he concluded.

Russell has been working on his "water world" theory for nearly 26 years, and he feels like his work is just beginning.

After building evidence of the origin of life, the process that turned nothingness into protein, what's next is researching how that protein turned into intelligent life over billions of years. Russell may not have enough time to bridge the gap. "At my age," he said, "I feel like I need to put in the foundations properly. The hypothesis hasn't changed much and it's never been challenged. I think we're on the right track and we're just trying to welcome other people into the terrain."

Russell's team may have proven the most important part. Their research zeroes in on a small period of time, just the part where the planet's life goes from nothing to something, that predates billions of years of species evolution. Russell intended to figure out where we came from. He's now close to a definitive answer.

"Evolution is a worrisome area for people," Russell said. "People are frightened at thinking about the emergence of life because it takes away their power if they use, shall we say, religious methods to power, which some people do. So of course it's frightening for us to come along and say, 'Well, actually...'"

Mike McHargue, host of the podcast Ask Science Mike, thinks this discovery might not make waves in the religious community. "Whenever science makes new discoveries about our origins, religious skeptics call it another nail in the coffin of faith," he told Mic in an email. "People of faith, on the other hand, see the same discovery and believe we have a better understanding of God's creative process. I can't see how this discovery will shake up those two perspectives. I hope we can all agree, however, that such insights show us what a magnificent universe we live in."

Russell said he didn't go into the research trying to prove a theory that has been around for thousands of years in churches, temples and mosques. He is, after all, a scientist presented with a massive question. To him, this is his contribution to the planet. He knows the model isn't good enough to show world governments how to harness the power of the ocean. It doesn't have a practical application.

The water world theory is like Russell's magnum opus, his "Requiem," Starry Night or "Bohemian Rhapsody." To Russell, his life's work is just a way to give back to the entity that he's exalted forever: "I'm a scientist and I worship the universe."

"Everyone's trying to make sense of the world the best they can," he said. "This is our own consolation. We have this short window of peering into the universe, and we're doing the best we can with it."