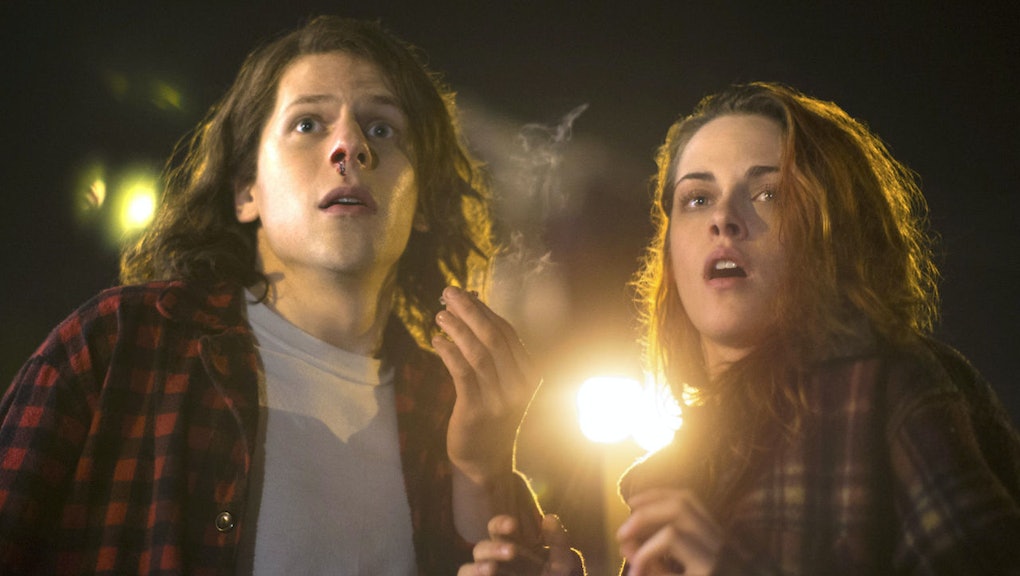 'American Ultra' Isn't Great, But It Reveals What More Movies Need to Do to Be Better

American Ultra, Kristen Stewart and Jesse Eisenberg's new movie hitting theaters this weekend, is not particularly great. It's fine, even fun at moments, but the whole thing is kind of an incoherent mess.

The plot: Eisenberg plays a CIA sleeper cell agent living without any memories of his training. He and his girlfriend, played by Stewart, live in a tiny town smoking weed and wasting the days away. They live a simple but happy life. That all changes when the CIA decides they need to wipe him out.

What makes American Ultra enjoyable despite its flaws is how intriguing it is. There were a lot of good choices made among the bad ones, making it the kind of film that will inspire others. Here are three lessons filmmakers can learn from American Ultra — two things that the movie does well, and one that it fails to do entirely.

This goes beyond Stewart as Phoebe and Eisenberg as Mike. Frankly, they're probably the least interesting choices of all. Though Stewart continues her impressive streak of performances in this film, we've seen her and Eisenberg together before in Adventureland. They're a solid pairing, but not so much has changed since 2009 that we needed a reunion.

The rest of the cast, however, is stellar. Friday Night Lights' Connie Britton as a high-level CIA agent? Veep's Tony Hale as her slightly bumbling but lovable co-worker? Topher Grace channeling all his inherent insufferableness into a thoroughly loathing-worthy villain? Yes, yes and yes. They're all original, fresh choices. Unfortunately, that same creativity did not also inspire diverse casting — this is a very white ensemble.

That same creativity shines in how American Ultra mixes and matches genres. It's a comedy but also an action movie. It's about stoners and the CIA. It's brutally violent but still lighthearted. Director Nima Nourizadeh and writer Max Landis have created the cinematic version of a remix. For a few fleeting moments, it sounds great.

Unfortunately, the blend doesn't quite work. Nourizadeh is going for the Quentin Tarantino-esque shock value of a gory, funny movie, but without that master director's skill. As a result, it comes across as amateurish and tonally bizarre. Intense scenes don't feel like they have stakes when the action stops for jokes. The jokes themselves rarely land.

Despite execution problems, American Ultra shows immense ambition that, in a better movie, would be admirable enough to overlook tiny problems. So what's the movie's greatest flaw? Spoilers follow.

How on earth does a movie that features Britton and Stewart as the dual CIA contacts for Eisenberg's character not have them talk to each other once? These are not tangentially related characters — they are bonded together by the protagonist. Yet somehow, they only talk to men.

It makes perfect sense that, even in flashback, we would see how Phoebe first got assigned to Mike, perhaps in conversation with Britton's Victoria Lassiter. Certainly there's no reason why Lassiter can't show up before Phoebe gets taken by the CIA. It almost feels as if Nourizadeh and Landis went out of their way to make sure the two would not exchange a word.

This is all the more frustrating because both characters are, on the whole, pretty well-drawn. They have traits not directly related to Mike. It's easy to believe they have lives outside of this movie. To avoid giving them any dialogue together at all is an astonishing choice.

American Ultra, for all its dysfunction, is an entertaining movie. In a summer lacking many quality blockbusters, this one is at least trying for originality. Yet the best thing about it is the movies it will inspire long after American Ultra itself is forgotten.