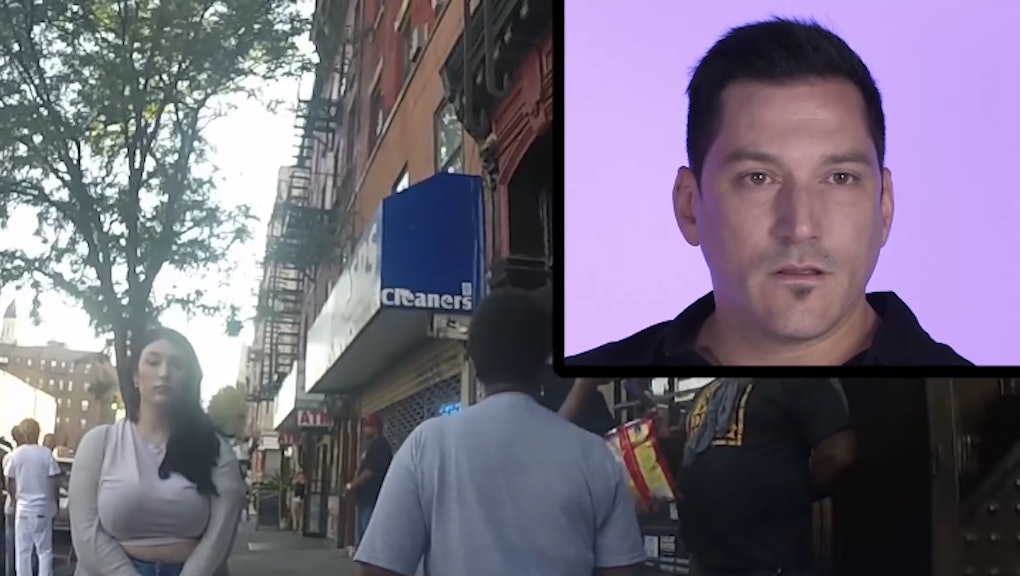 Men Only Care About Catcalling When It Affects Women They Know

In the United States, 65% of all women say they have experienced street harassment, according to a 2014 report by the organization Stop Street Harassment. Still, it seems that many men are unaware of or unwilling to confront the prevalence of street harassment. A wave of new videos seeks to change that by forcing men to witness the harassment the women in their lives face — but is this really changing their minds, or just momentarily grabbing their attention?

"I'm getting pissed off," says one boyfriend. "I'm not happy with this."

"What the fuck?" another succinctly reacts.

On Monday, The Scene published a similar video — this time asking fathers to react to the harassment their daughters faced.

While most fathers appeared disturbed, it still took one a while to catch on.

"She is very beautiful," he said, concurring with one harasser. After three full minutes of harassment, however, he said that the comments were "upsetting me now."

The empathy gap: In order to understand women's issues, men are commonly encouraged to consider how gender-based discrimination ultimately effects them. Educators prompt men to imagine how they would feel if their mothers, wives, daughters or sisters were subjected to the treatment they either perpetuate or allow to persist by remaining silent. This mentality is implicitly evident in the premise of these videos, and even referenced outright.

"You're somebody's daughter, like somebody's sister," says one boyfriend of a catcalled woman. "I'm sure if somebody did that to their mother or their cousin or something they wouldn't appreciate it."

This framework ultimately centers on the feelings of these men rather than the women subjected to harassment in the first place. Feministing's Maya Dusenbery has called this phenomenon "the empathy gender gap."

As Dusenbery reported, multiple studies capture that gap: Women are trained to empathize with others, while men must feel motivated to do so: To truly care about the experiences of others, men may require proof that those experiences directly, negatively effect them, too. In this case, the proof is provided by actual visual documentation of women they know being harassed.

"Boys shouldn't be taught that only women to whom they are genetically bound are worthy of being treated as human beings because, in part, that implies those who are not family are subhuman and therefore deserving of their own victimization," Stassa Edwards wrote in Ms. in 2013.

Although both Dusenbery and Edwards were referring to sexual assault — specifically, the notorious and egregious Steubenville rape case — the empathy gender gap is certainly evident in discussions of street harassment.

Ideally, our society would recognize that street harassment is unacceptable based on the sexist way it objectifies and demeans women. We're not there yet, though, and that's why these videos — flawed as they are — still have some value.