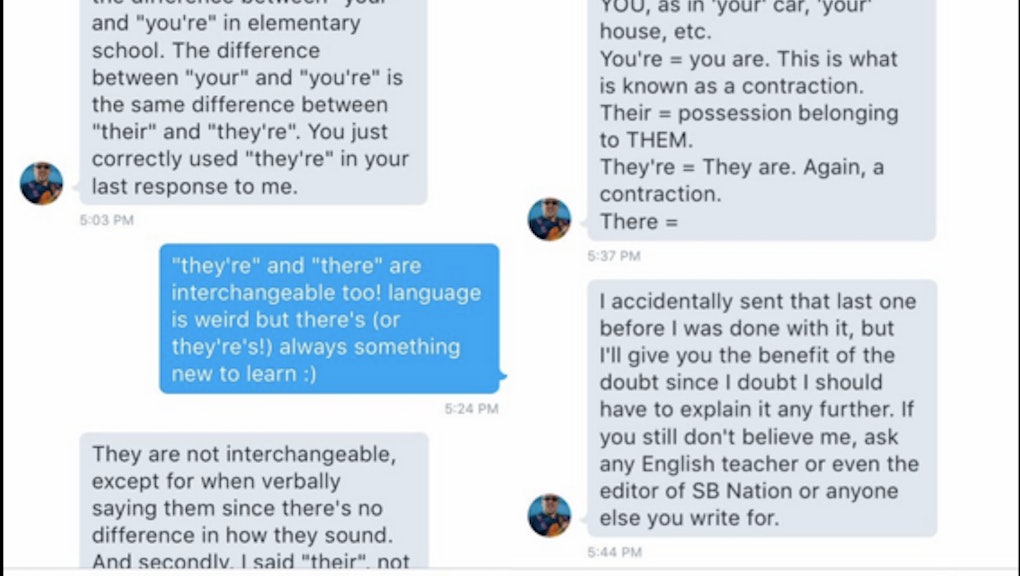 That said, it can be fun for women to screw with dudes who feel the need to police and correct the things they say. That's what sports writer Claire McNear decided to do when a reader made it his mission to grammarsplain to her on Twitter, sending her a series of finger-wagging messages teaching her the difference between "you're" and "your."

"With all due respect, I just have trouble with the fact that you seem oblivious to the grammatical difference between 'your' and 'you're' — very unbecoming for a journalist," the man wrote. 'Still, I only offer this as a means of helping you be a better writer."

Ever-so-graciously accepting the unsolicited offer of assistance, McNear proceeded to feign total ignorance of the grammatical distinction between the two words, facetiously making up new rules for the English language.

"I appreciate your patience, but it's widely known that 'your' and 'you're' are synonyms," McNear responded.

Of course, because the dude in question was, for lack of a better term, a boorish moron, her joke went unnoticed for some time, and the grammersplaining continued. (He did eventually apologize to McNear when he realized what was going on.)

"Mansplaining" might've entered the cultural lexicon a few years ago, but the concept itself has a long cultural history, especially among male politicians. Rebecca Solnit, the writer credited with identifying mansplaining as a cultural phenomenon with her essay "Men Explain Things To Me," has pointed out that it "is not a universal flaw of the gender, just the intersection between overconfidence and cluelessness" that tends to be fairly common among men.

Regardless of who's doing the mansplaining (or grammarsplaining, in this case) to whom, it's almost always unnecessary and rarely ends well — unless, of course, the mansplainee has a sense of humor about it, as McNear clearly did.