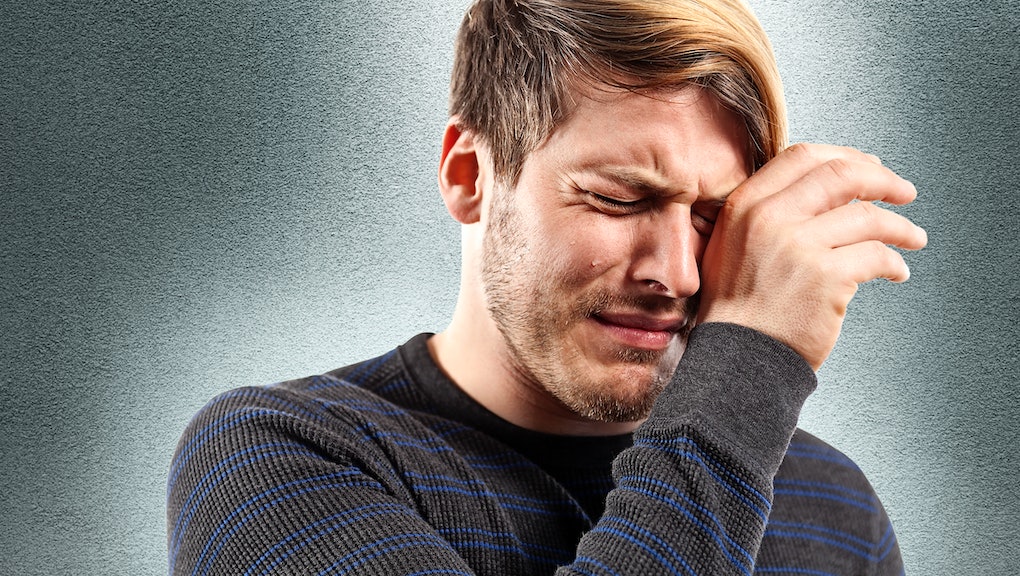 You Might Not Be a "Male Feminist." You Could Just Be an Asshole.

Earlier this week, BuzzFeed's Grace Spelman became the latest woman to demonstrate the risks of being online while female by tweeting screenshots of the belligerent exchanges she had with Ben Schoen, the former host of the Harry Potter podcast MuggleCast. When Spelman politely rebuffed Schoen's advances, he lashed out at her via a series of abusive messages and emails.

For his part, Schoen strongly denied he was harassing Spelman. In a statement to the Daily Dot, Schoen not only refused to apologize for his actions but claimed he couldn't possibly be sexist, as he has "done more for the cause of advancing women's rights than any of the people who are criticizing me."

In the wake of the incident, Schoen has tweeted erratically in his defense and even held a disturbing "press conference," raising the possibility he may be an attention-baiting troll. (Schoen has also hinted at having mental health issues on Twitter.) But one thing is clear: Contacting a woman repeatedly via different media after being told not to, then attempting to publicly shame her, then accusing her of being on her period isn't usually called "advancing women's rights."

It's called "being an asshole."

Feminism is more than a label. Schoen isn't the only man to cite his feminist credentials after being accused of sexism. When scientist and professor Tim Hunt was criticized for making a joke about how female scientists cry a lot and fall in love with their bosses, his peers and family members rushed to insist he wasn't sexist; his wife told the Guardian that Hunt couldn't possibly have offensive views about women because he "does all the shopping and the cooking" at home.

Comedian Patton Oswalt has also frequently cited his liberal credentials, despite defending rape jokes and tweeting at people to "stop giving a shit about gender politics." And let's not forget the politicians who say offensive things about women while trying to strip them of their rights, all while citing the many pro-female causes they've supported.

While it might be true that each of these self-styled women's rights advocates has taken steps toward gender equality at times, it's also true they've behaved in ways that are intimidating, demeaning and occasionally life-threatening. Their actions, which often border on harassment, are forms of violence against women. And contrary to how they might view themselves and their own actions, these men aren't the solution to cultural misogyny. They're part of the problem.

Calling yourself a feminist isn't a free pass to be awful to women. It's important to note that this type of behavior isn't limited to online trolls or crybabies who call women fat when they don't message them back on Tinder. It also appears in more subtle form in the form of the nice guy syndrome, a term used to describe men who are superficially decent and respectful to women in the hopes their behavior will earn them sex later on down the road.

In a recent Medium essay, Alan Hanson refers to the type of man who cloaks himself in the guise of the sensitive liberal male as a "softboy." While he might not be as blatantly misogynistic as the average Tinder troll or men's rights activist, the softboy is nonetheless "emotionally intelligent but does nothing with this knowledge," Hanson writes. "He is artistic. He is aware. He is still a dick."

Practice what you preach, bro. It is, admittedly, difficult — nay, impossible — to be a perfect feminist. Striving for gender equality, in thought and deed, is hard work. It often involves acting against the urges we've been conditioned to have, which might mean tearing down other women in an effort to feel better about ourselves, or becoming petulant and angry at the first signs of rejection. We don't always get it right. Either way, we have to try.

Harassing women online or in real life is not trying. "Advancing women's rights" in the past is not a shield for future bad behavior. A single misstep doesn't mean a person never has been or never can be a feminist ally, but sometimes those missteps reflect a need for an attitude adjustment.

Male feminists and feminist allies, take note: Supporting gender equality isn't as simple as asserting the wage gap needs to be closed or donating to Planned Parenthood. It means seeing women as fully human. Then it means actually treating them that way.