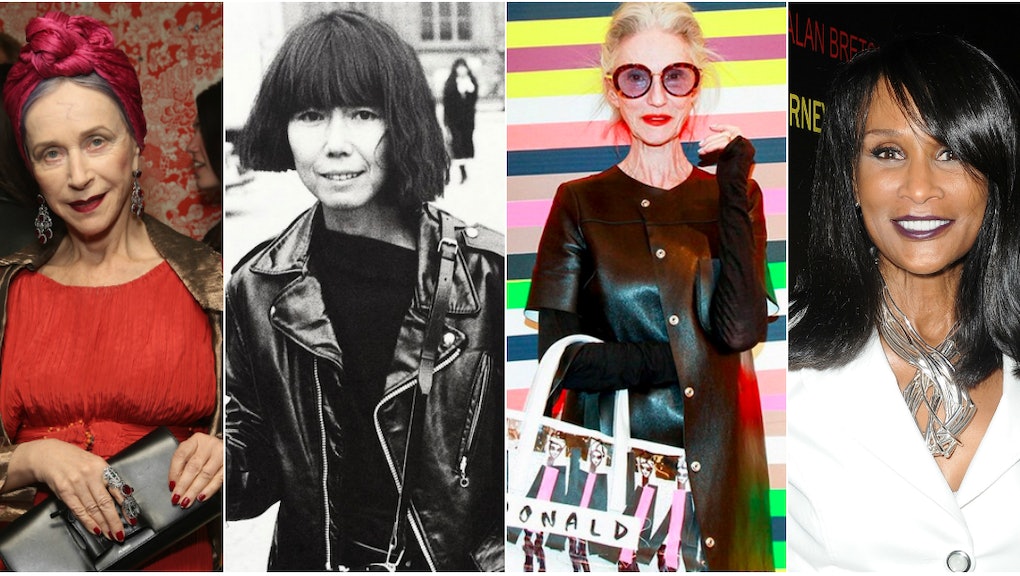 When it comes to fashion, youth is always in style. Most fashion magazine covers, ads and runways are filled with fresh faces under the age of 30, with just a few bold-faced exceptions (Cher, 69, in the latest ad campaign for Marc Jacobs, for example, or 80-year-old Joan Didion featured in ads for Celine).

While their inclusion should be applauded, it's a rarity in a fashion industry where younger models are the ideal. Case in point: Dior just made headlines for having a 14-year-old model on the runway.

But while we idolize pretty young things, there's something they don't have: years and years spent honing their style... and shaking off insecurities until they no longer care what others think. There's a bevy of stylish, older women whose clothing choices put any trendy cover girl to shame. It seems that with age comes the wisdom — to not give a fuck about what you wear.

Here are 11 women with kickass style and even more inspiring attitudes.

Her memorable look: Ost is known for her iconic and colorful turbans. She's also not one to shy away from rich, jewel-tone colors, with some fur thrown in for good measure. There's no such thing as too much.

Words to live by: "To love is the best, most desirable reality," she said, explaining her own dream. "Live your life as a piece of art." — National Geographic

Her memorable look: Kawakubo's look is two things — black and restrained. Her blunt bangs and bob lend her hair an architectural quality, making it clear that when it comes to style, it's about the details.

Words to live by: "What you wear can largely govern your feelings and your emotions, and how you look influences the way people regard you. So fashion plays an important role on both the practical level and the aesthetic level." — Interview

Her memorable look: The woman behind the iconic wrap-dress is known for her easy, breezy style emphasizing beautiful prints and jersey dresses that are comfortable and elegant.

Words to live by: "I really sell confidence, because confidence is what allows you to design your life and be the person you are or want to be." — Interview

Her memorable look: The now-iconic outfits of the Sex and the City women are all thanks to Field, who created each character's colorful and distinct look. The woman is not afraid of color: She's always seen with her bright, red hair and signature red lips.

Words to live by: "I said to my assistant — who's 22 and lives in Bushwick — 'Rosie, what the hell is a hipster?' Because in my generation, hipster is kind of like beatnik-bohemian. I was a hipster. And she's like, 'You have the clothes you have, you put them together, and you make them look good, and you go out there, and you feel like you look good. That's a hipster.' So I said, 'Thank you, Rosie.' " — Hollywood Reporter

Her memorable look: Westwood played a big role in Britain's rising punk scene in the 1970s, and her own sartorial choices have always rejected mainstream trends in favor of big, unabashed personality.

Words to live by: "The age in which we live, this non-stop distraction, is making it more impossible for the young generation to ever have the curiosity or discipline ... Because you need to be alone to find out anything." —Interview

Her memorable look: The designer is known for her trademark short, pink hair, blue eye shadow and a career that's spanned decades — she's dressed everyone from Princess Diana to Kate Moss.

Words to live by: "It's just who I am," Rhodes says simply. "If I went grey for instance, it just wouldn't be me. When I was younger, I did green hair, then blue with curls drawn on my face. Someone said, "If you look like that, your textiles must be marvellous." — TheStar.com

Her memorable look: Hutton is a fan of the "less is more" style mantra and embodies unfussy prep like the American legend she is. Like an older Ellen DeGeneres, she's often seen wearing sleek trousers and blazers in neutral colors.

Words to live by: "People say you're either born with style or you're not," she says. "That's hooey. Look at yourself in the mirror, really hard. [Style is] what suits you. Try to get rid of everyone else's ideas of what you are, and take a good look." — Elle

Her memorable look: The model, the first black woman to ever cover Vogue, has maintained a sleek look over the years with an emphasis on black and white. Her classic silhouettes emphasize her body in a sophisticated and sexy way, proving that certain styles never go out of fashion.

Words to live by: "No one really makes it alone, but I really take homage knowing that I can depend on myself," she said. "Give the ball to me, pass it over here. Because I'm not going to let myself down." — PopSugar

Noteworthy looks: Rodin is known in the fashion world for her signature red pout and sunglasses. Oh, and there's also her trusty dog companion, Winky.

Words to live by: "I think one does feel more liberated and independent when one gets older. More honest and open with yourself and others. But you still have insecurities—they're different, but they don't totally go away. But you reach a point and say 'That's OK.' In the end, nobody's perfect, and we're all doing the best we can." — Into the Gloss

Her memorable look: Apfel isn't one to shy away from color, texture and plenty of oversized necklaces. Her cropped, gray hair and large, round eyeglasses are her signatures, but you never can expect what else she's going to pair them with.

Words to live by: "If I've got someplace to be, I'll spend more time getting dressed than I spent at the actual event. Sometimes. Even in my own closet, I love to dig and search and find. And if I'm shopping...You know, if it's a piece of fabric, I listen to the threads. It's not intellectual at all. The price is nothing. It's the emotional content: I have to feel it in my gut. I don't know how to explain it other than that." — Style.com

Her memorable look: This list wouldn't be complete without mentioning the iconic Anna Piaggi, the longtime fashion writer known for her quirky and inimitable style. She regularly wore intricate headgear, extreme makeup with plenty of texture, and was dying her hair unicorn colors before it was cool.

Words to live by: In a column for W magazine, Diane Solway writes that Piaggi's "theatrical getups worked because she believed in them, regardless of the impact they made on anyone else. Which is, of course, precisely why they resonated with other like-minded exotics."