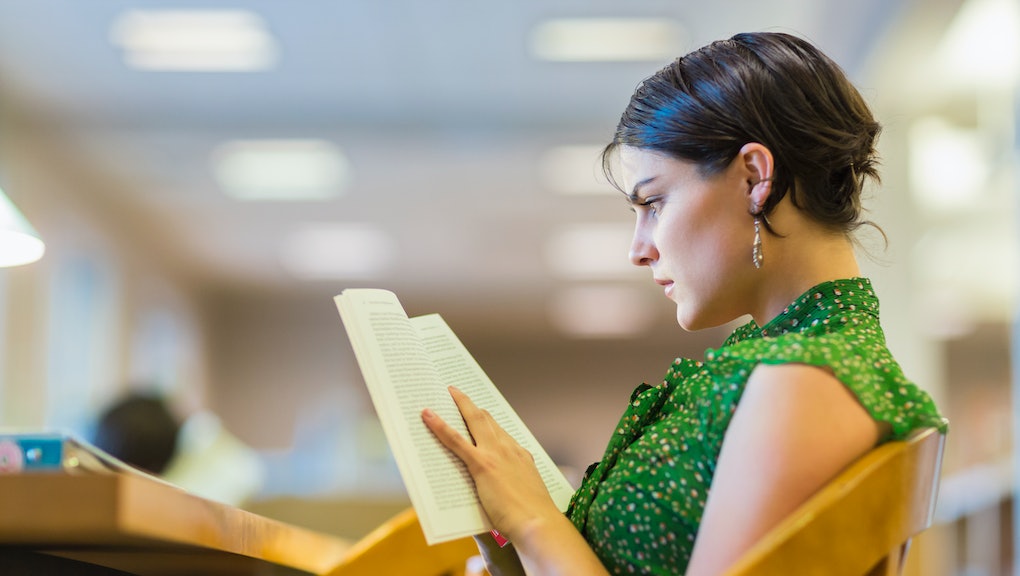 Reading Books Instead of Kindles Can Improve Your Memory, Concentration and Good Looks

Old fashioned books have picked up a lot of haters in recent years. Environmentalists have decried them as "dead tree" mediums, while average readers often complain they can be weighty, cumbersome and don't travel well. Some have argued it's time to retire the 15th century technology and embrace Kindles and other electronic reading devices.

Science, however, offers another view. According to numerous studies and expert opinion, reading physical books can improve memory, concentration and may even make you physically more attractive.

Memory: According to at least one study, conducted by researchers at Stavanger University in Norway, people who read actual books are significantly better at remembering what they read as opposed to people who read books on a Kindle and other e-readers.

"The haptic and tactile feedback of a Kindle does not provide the same support for mental reconstruction of a story as a print pocket book does," lead researcher Anne Mangen concluded.

Part of the reason also has to do with the unique interaction required in reading a real book. Mangen further speculated that "the fixity of a text on paper, and this very gradual unfolding of paper as you progress through a story is some kind of sensory offload, supporting the visual sense of progress when you're reading."

Additional studies indicate the not being able to flip back and forth between pages or easily make notes further erodes the ability to commit the information to the brain's long-term memory.

Concentration: Others have argued e-reading has reduced our ability to understand and concentrate on the text in front of us. The hypothesis was backed up by a survey conducted by Naomi Baron, author of Words Onscreen: The Fate of Reading in a Digital World and executive director for American University's Center for Teaching, Research and Learning. Baron told Mic, after speaking with 400 students between the ages of 18 and 26 in the United States, Germany, Japan, India and Slovakia, the results were irrefutable.

"If you ask students in this age cohort, where do you best concentrate, in which kind of medium... depending on the country, between 92 and 94% of students said, 'I concentrate best when I read print,'" Baron said. Baron also said that roughly the same percentage would prefer using real books if price were not a factor.

Baron said the problem when reading with so many potential distractions could be encapsulated in an analogy: "If I put a bowl of potato chips in front of you and said 'I'll be back in an hour, don't ruin your appetite,' how many potato chips are left?"

Reading is sexy and makes you a more empathetic person. As anyone who has seen the famous Hot Dudes Reading Instagram account will know, there are few things as sexy as reading an old fashioned book. A casual scroll through its entries reveals nary a Kindle in sight. For further proof, looking through Craigslist's missed connections reveals a number of examples of the passion reading on real books can inspire.

Other studies meanwhile have shown people who read physical books were more empathetic, and those who read an unpleasant story on an iPad were less moved than those who read it on an old fashioned paper book.

So don't burn the books just yet. The good news is that despite the alluring convenience and cost of electronic reading devices, books have held their ground. Since a highpoint in 2012, e-reader sales fell off sharply. In 2014, publishers Penguin Random House and Simon and Schuster bled 8.8% of total profits largely due to disappointing sales in readers. Sales for Barnes and Noble's Nook reader also slumped that same year.

"It's a more personal connection when I read a book over the electronic," Angela Groth, the director of the Ardsley, New York Public Library, told Mic, adding grim predictions of shuttered libraries were completely off mark. "Physical books are more popular than electronics.

"From what I've seen and experienced, they're still going after the books."