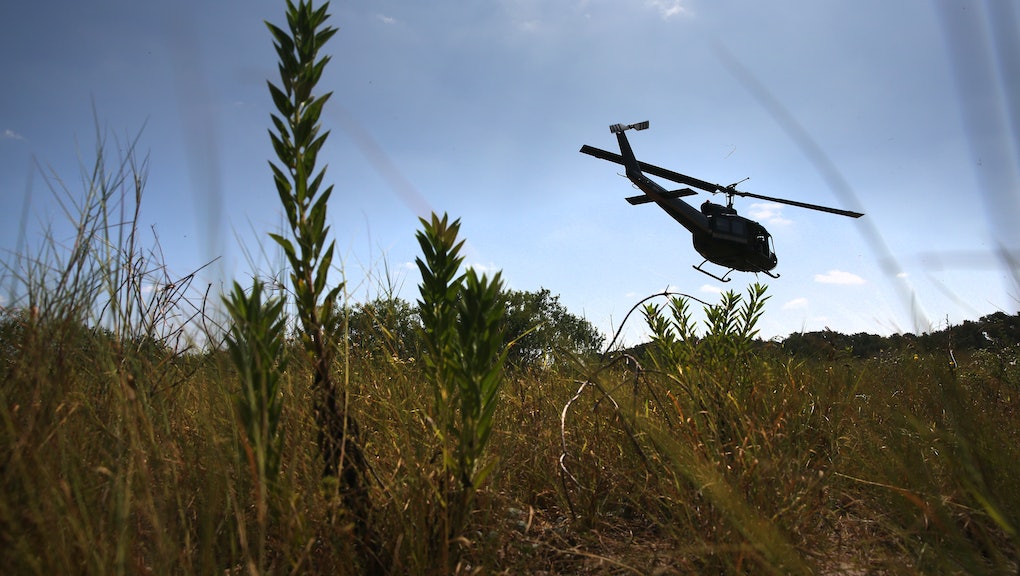 What Republicans Don't Want You to Know About "Securing the Border"

The subject: Immigration. The plan: Hysterical.

Most notably, Trump wants to end birthright citizenship. This, he says on his website, is "the biggest magnet for illegal immigration." It's not going to happen, even if Trump is elected, but that doesn't mean his fellow primary contestants are shying away from his positions. Former Florida Gov. Jeb Bush on Wednesday referred to children born in the United States to immigrant parents as "anchor babies," an old and crude term for which he was promptly ripped by Democrats including Hillary Clinton.

Trump began his campaign by accusing immigrants of "bringing crime" and "bringing drugs" — and hasn't really gone beyond that, and for good reason. His ideas about immigration, in particular as it relates to Mexico, are almost entirely unfounded and routinely staked to anecdotal evidence or erroneous "reports."

That in mind, we put together basic facts to help guide you through this increasingly ridiculous debate:

The two biggest U.S. border cities are among the safest in the country.

Among cities with populations of 500,000 or more, five of the six with the lowest "crime rate rankings" are in Texas or California, according to a 2013 report from Congressional Quarterly. New York is ranked No. 3.

The two safest? El Paso and San Diego, both of which sit right on the border with Mexico.

New York's place on that list is especially salient given its place as the largest of the estimated 200 "sanctuary cities" across the country. The designation reflects a decision by local governments to protect undocumented immigrants from federal law enforcement. This makes it easier to collect taxes — undocumented immigrants paid $11.84 billion in state and local taxes in 2012, according to the Institute on Taxation and Economic Policy — and encourages people who might otherwise avoid the authorities even if they've been the victim of a crime to become active members of their communities. Former New York Mayor Ed Koch implemented the sanctuary system with an executive order in 1989, and Rudy Giuliani, a Republican, defended the policy throughout his two terms.

Koch's executive order, Giuliani argued in 1996, "protects undocumented immigrants in New York from being reported to the [Immigration officers] while they are using city services that are critical for their health and safety, and for the health and safety of the entire city."

Still, Trump and other hardliners have been sharply critical of local leaders in sanctuary cities like San Francisco, which came into the spotlight when a young woman was fatally shot there in July by an undocumented immigrant with a criminal record. (That man, Juan Francisco Lopez-Sanchez, was wanted for deportation at the time of the incident and would have been turned over to federal authorities if local police had found him sooner.)

Between 2010 and 2013, the number of Mexican immigrants in the United States went down.

For parts of four decades beginning in the 1970s, the Mexican-born population inside the United States grew at a staggering clip. But according to a Pew Research Center report from 2012, the first signs of a slowdown and reversal came as early as 2005. Over the course of the next five years, "a total of 1.4 million Mexicans immigrated to the United States, down by more than half from the 3 million who had done so in the five-year period of 1995 to 2000."

According to a study conducted in January 2014 by the nonpartisan organization Mexicans and Americans Thinking Together, 1.4 million emigres returned to Mexico between between 2005 and 2010.

Of course, not all immigration is "illegal" and not every Mexican-born noncitizen living in the United States is in the country without documentation. But the ginned-up concern about the influx of Mexican immigrants into the United States does not meet with reality.

As evidenced below, the unauthorized immigrant population has followed a similar trend:

In fact, according to a recent report in Foreign Policy, the sea-to-sea border wall prized by red-faced politicians like Trump would, in effect, do more to keep undocumented immigrants inside the United States than keep them from entering in the first place.

The United States is spending a lot on border security — and getting results.

The budget for the Department of Homeland Security will continue to grow in the coming year. Big investments in staff and technology have helped created a robust federal border force. In 2014, this led to the "apprehension" of 229,178 Mexican nationals, almost all of them along the Southwest border. That number is down 14% from 2013, according to DHS statistics.

Illegal immigration, as the DHS defines it, has decreased, but that doesn't mean there is less action at the border. Because of assorted political and economic crises in Central America, the flow of families and unaccompanied minors seeking to escape danger in their home countries reached crisis levels by early 2014. In response, the Obama administration asked Congress for an additional $3.7 billion to fund a "border security surge," among other things.

Republicans actually rejected that request, but per the DHS, aggressive action taken in spite of Washington dysfunction brought children and family crossings down to a two-year low by last September.

There's no evidence terrorists are crossing into the United States from Mexico.

The next terrorist attack committed by militants having entered the country covertly from Mexico will be the first.

In 2012, then-Homeland Security Secretary Janet Napolitano speculated that people with the "intent to harm" Americans were making the journey from "time to time." But nothing came of it. More recently, Republican congressional candidates during the 2014 election cycle sought to stoke concerns about the border as an entry point for Islamic State group fighters.

"It is true, that we know that ISIS is present in Ciudad Juarez or they were within the last few weeks," Rep. Trent Franks (R-Ariz.) said on a radio show last September. "So there's no question that they have designs on trying to come into Arizona." A federal law enforcement official told KVIA in El Paso that it was "unverified and unlikely" that militants were camping out on the other side of the border.

Another unsubstantiated claim from Republican Tom Cotton, a congressman running (successfully, as it turned out) for Senate. The Washington Post obtained audio of Cotton telling a "tele-town hall" audience that the Islamic State group was collaborating with Mexican drug cartels. "They could infiltrate our defenseless border," he said, "and attack us right here in places like Arkansas."

Cotton made his comments in October 2014. Nearly a year later, Arkansas remains free of Islamic State fighters and there is, like before, no credible evidence that terrorists have or plan to use the border with Mexico as an entry point into the United States.

Asked about these concerns, such as they are, Marc Rosenblum from the nonpartisan Migration Policy Institute told NPR this week he believes "the U.S.-Mexico border is more secure than it's been in 40 years."

As of December 2013, Mexico was the U.S.'s third largest global trading partner, accounting for nearly 20% of its exports. That same year, the Department of Agriculture estimated in a report that the countries were doing more than $1 billion in commerce every 24 hours.

The same study also cited research from the National Center for Risk and Economic Analysis of Terrorism Events, which faulted long delays at the southern border for choking off further commerce — and put the estimated value of an extra border agent at each of 33 crossing points at more than $65 million in gross domestic product.

How is that possible?

"Due to border security measures and the congestion, many exporters run the risk of damaging their product with prolonged border wait times," researchers wrote. "Several measures to speed the flow of products between the two nations are possible, but often limited by security concerns."

The Wilson Center came to a similar conclusion, reporting in 2012 that the U.S. Border Patrol's more than 21,000 agents represented a 518% increase from the early 1990s. The construction of security barriers on the ground, like "that danged fence," it found, "hampers both legitimate trade and travel as well as effective security operations."

An important conversation: Trump likes to brag that he alone is responsible for the immigration debate roiling the 2016 presidential field. While it's probably true that his grandstanding has pushed the issue to the top of the voters' minds, the end result might not be what he intended — specifically, a better informed public, less likely to bow to the demagogues and more inclined to seek out the very inconvenient facts on their own.