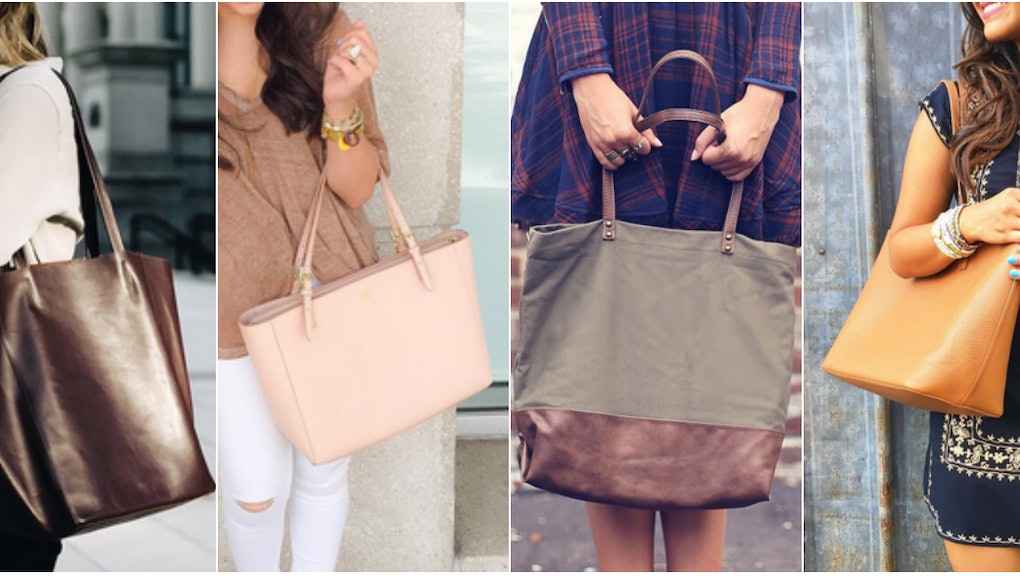 Think the latest "It" bag is expensive or flashy?

Actually, you might just be able to buy it — because the newest "It" bag is not an "It" bag at all. It's whatever simple tote you've got.

The age of lusting after Louis Vuitton monograms and Prada nylon backpacks, the kinds that were popular among tastemakers and desired by those younger and more cash-strapped (i.e. us in middle school), seem to have faded. Business Insider reported brands like Coach and Michael Kors are seeing an "undeniable" plunge in sales as millennials ditch luxury handbags.

Instead, the biggest style statement today is, well, understated. Simple styles with little to no branding reign supreme. In some cases, the lack of branding is itself a style marker, a signal for an exclusive club of in-the-know fashionistas. But more often, the branding doesn't matter.

The most telling example might be today's trendy bucket bag — the shape is ubiquitous, but the designer name hasn't skyrocketed into "household" status. Mansur Gavriel, which has been around since 2012, made a splash with the bucket bag, and it was quickly mimicked and popped up on Instagram.

But while the style has spread, with no clear branding or logos, the Mansur Gavriel name hasn't quite so much. Tellingly, Business of Fashion called it the "first post-Recession bag," and The Cut called Mansur Gavriel "the anti-'It' bag designers."

The other key example is Madewell's Transport Tote, which in the past few years became one of the most popular bags around — a simple unmarked, unadorned leather bag, for under $200. Lucky's Natalie Matthews described it as "the opposite of a look-at-me bag."

The beauty? It doesn't really seem to matter whether your plain bag is from Madewell or Mansur Gavriel. Really, the trend is as simple as can be, from no brand in particular.

Why are we suddenly OK with pretty yet nondescript tote bags that don't scream for attention? A big part of it is money. With high levels of student debt, we're splurging on essentials and small luxuries (think: your brand-new iPhone, all those brunches), rather than trendy fashion that will change in a season anyway.

"I personally stray away from fast fashion and instead buy pieces that have more staying power," Sarah,* 24, told Mic, saying that while she has spent anywhere from $175 to $600 on a bag, she purchases them infrequently, no more than four in the past eight years.

A designer name too is no longer the status symbol it once was.

Kathy Hwang, a 29-year-old who worked as a fashion accessories buyer, told Mic, "I think younger millennials, they're very price-savvy, they're more alert about how much things [cost]," she said. "I think they're less concerned about what people think of them based on what kind of clothes they wear and what kind of bags they carry."

Less important than a flashy logo or glimmering tag is quality. "The thing I look for most in a handbag is quality because good leather is everything," said Rachel, 24, who counts size and strap length among a bag's major selling points. Still, she says, she "never" spends more than $250.

When we do buy trendy bags? It only makes sense to go cheap, opting for quantity over quality. Several women told Mic they prefer thriving fast-fashion retailers like Zara and Aldo, where bags can cost anywhere from $20 to $60.

Which is why the most reasonable modern "It" bag of all is the canvas tote, which you can find all over Instagram alongside fancier accessories. It does convey status, sure, as we express our taste in books, wine or vacation spots. But what a canvas bag doesn't flaunt is the money you spent on it.

Which is a fashion trend we can definitely get on board with.

Who said you need tons of money to swing a cute bag from your shoulder?