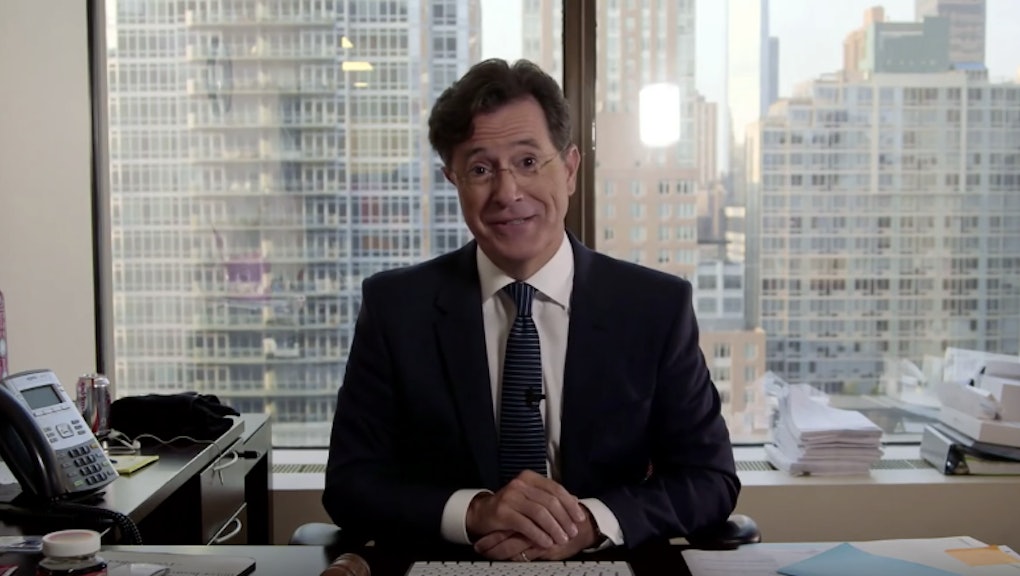 Stephen Colbert is known for using humor to expose big issues. The soon-to-be Late Show host leverages this skill once again in a new video — this time not to skewer politicians, but to stand up for girls around the world.

Colbert, who will host the Global Citizen Festival in New York next month, released a video Monday explaining that instead of selling tickets to the event, attendees must earn their way in by "taking selfless action to help humanity," especially encouraging "people to fight inequality, protect our planet and to end extreme poverty by 2030," Colbert says. "And you were bragging because you lost 10 pounds after New Year's."

Attendees can focus on any cause, but the one that matters most to him, Colbert says, is girls' education.

"Growing up I knew many girls," Colbert says. "My mother was a girl once. And I believe giving girls equal access to education worldwide is not only the right thing to do, but saying so might make Beyoncé like me."

The only logical way to approach this goal, Colbert asserts, is to use Twitter to invade Norway.

#EducationFjorAll: Norway is a leader in global education funding, which is why Colbert encouraged viewers to tweet directly to the country's prime minister, Erna Solberg, urging the country to set an example for the rest of the world by giving $100 million to the Global Partnership for Education every year for the next five years. To prove his respect for the forward-thinking nation, the comedian concluded his video by eating a hearty serving of a Norwegian national delicacy, lutefisk, and listening to Norwegian death metal.

While tongue-in-cheek, Colbert's video hit on an important issue: An estimated 63 million school-aged girls were not enrolled in school in 2013 according to UNICEF. In some cases, the gender education gap stems from social practices like child marriage and menstruation-related barriers, or economic issues like school fees or having to work to provide for family, the same organization reports.

In a response posted Wednesday, Solberg says she didn't necessarily appreciate her clogged Twitter feed but had noted that Colbert has his "priorities right: lutefisk, death metal and girls' education."

The state of girls' education is "unacceptable," she says, and Norway is committed to contributing to the cause. Instead of agreeing to Colbert's $500 million request, however, Solberg stressed the need for "global partnerships," encouraging "other nations, private companies and key partners" to reach what she presents as the ultimate goal of raising $22 billion annually between now and 2030 for education equality.

Both Colbert's ask and Solberg's response underscore just how far the world is from reaching educational parity and how crucial it is to get involved — and not just to score tickets to see Beyoncé perform at the Global Citizens Festival. After all, as Solberg noted in her response, "When you educate a girl, you educate a nation."