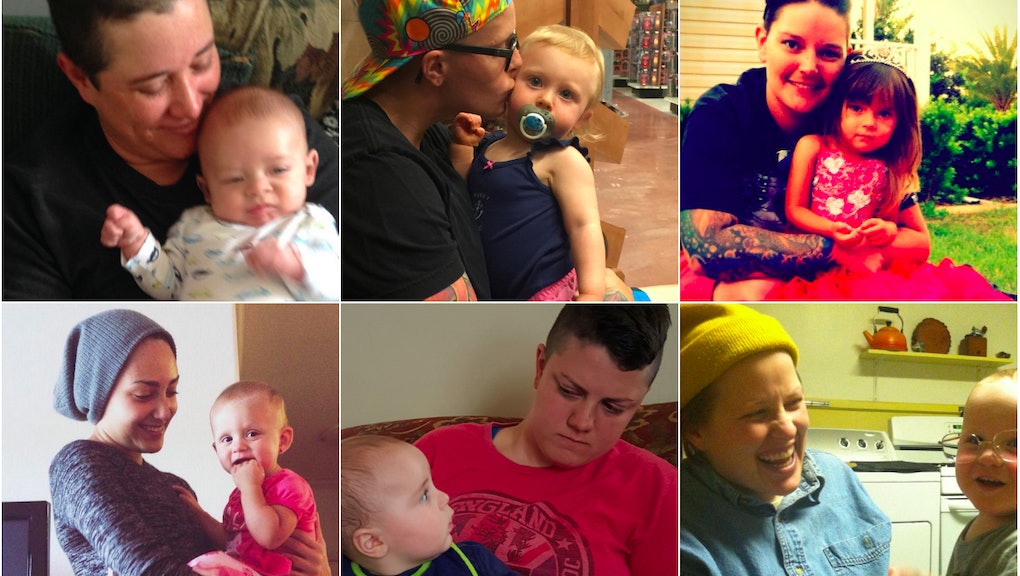 "Butches and Babies" Is Showing What Real Moms Look Like

There's a new face of motherhood in America, and she's rocking a pretty sweet buzz cut.

The Butches and Babies Tumblr is basically exactly what it sounds like: a collection of images of self-identified butch people being generally adorable with babies.

Photos with a purpose: While the images are undeniably sweet, the Tumblr's goal isn't to make you pass out from cuteness. For butch-loving site creator Meaghan O'Malley, who identifies as a queer cisgender woman, the website is largely about increasing visibility of non-heteronormative mothers, "at a time when many people in my 'queer generation' are settling down and building families of their own."

"While the number of celebrities embracing butch identities has increased dramatically over the past 10 to 15 years, the reality is that we don't see those people building families publicly," she told Mic.

Paving the way for acceptance: It's true that our culture has seen a huge spike in acceptance of certain LGBT issues as of late. Thanks to the Supreme Court ruling for same-sex marriage and celebrities like Miley Cyrus and Ruby Rose publicly self-identifying outside the gender or sexuality binaries, mainstream discussion is turning toward some of these issues more and more.

That said, we rarely see images of gender nonconforming or self-identified butch people as mothers. Further, there's still rampant discrimination against same-sex parents, such as the recent case of a Michigan pediatrician who refused to treat the infant daughter of a lesbian couple.

With Butches and Babies, O'Malley hopes to change people's perceptions of what the typical American parent looks like, especially if that parent is a woman.

"There is a shared vulnerability and tenderness between these adults, whose gender identities and expressions challenge the dominant paradigm on a daily basis, and babies, who are new and vulnerable and entirely dependent on the people and world around them to keep them safe," she said.

"Developmentally speaking, these babies are also not yet inured to the societal and cultural expectations of gender, so the interaction is fresh and without prejudices. That seemed almost revolutionary!"

The importance of O'Malley's work is underscored by the fact that we live in a world where queer women are increasingly represented in mainstream pop culture, yet butches somehow remain all but invisible.

"Generally speaking, for people who are butch, I hope they feel seen," O'Malley told Mic.