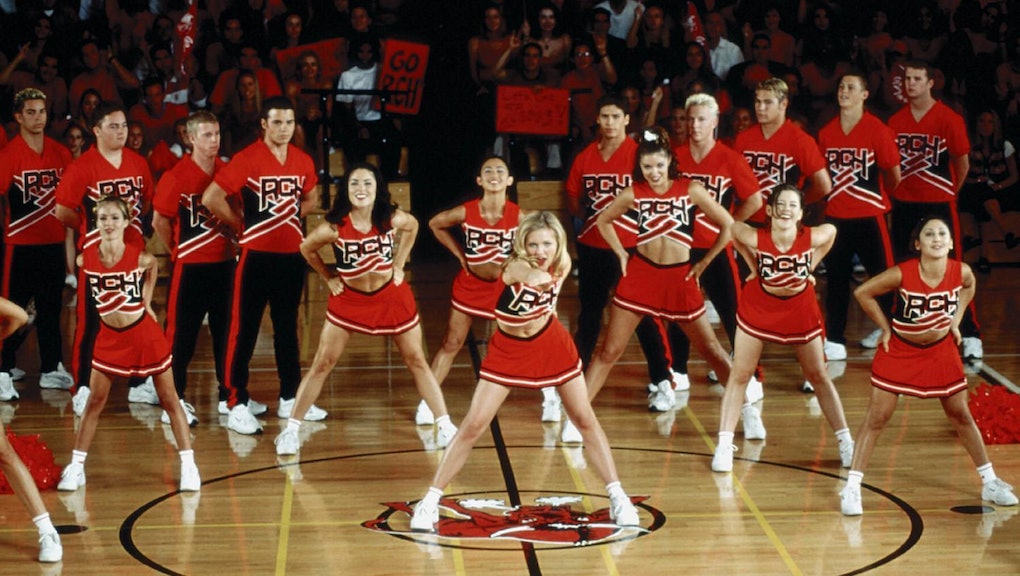 15 Years Later, 'Bring It On' Remains Our Most Surprisingly Feminist Teen Movie

Can a cheerleader be a feminist role model?

The question, as absurd as it is (spoiler alert: yes, obviously), nevertheless gets at the crux of what makes Bring It On, 15 years after its release, such an enduring film.

Upon hitting theaters, the mostly male film critics who reviewed it felt emboldened to implicitly call that question to mind. How else to explain the A.V. Club's Nathan Rabin glibly noting that the film is "as vapid as the cheerleading world it mindlessly celebrates"? Or A.O. Scott of the New York Times pointing out that you wouldn't be "entirely wrong" if you assumed that the plot of a film about high school cheerleading has "to be a flimsy scaffolding for the shameless exploitation of young women in short skirts"?

The unspoken assumption is that cheerleading is a vapid activity that shamelessly exploits young women. It's a common point of view, as well as a myopic one. It's present in everything from MTV's animated series Daria, where head cheerleader Brittany Taylor embodies everything the droll protagonist hates about girls her age, to American Beauty, which deploys the cheerleader as the repository of middle-aged suburban sexual anxiety.

The late '90s cemented the long-held stereotype of the cheerleader as the epitome of both everything Second Wave feminism feared and everything the male patriarchy required of its women: Even in having a choice, women would still opt to be pretty, sexual objects who cheered on and for their men. To craft a film around them was a laughable idea at best, exploitative at worst. It couldn't possibly carry even a whiff of feminist critique.

Enter Bring It On.

From its very first scene, this Peyton Reed film is aware of the stereotype it's calling forth. "I'm major! I roar! I swear I'm not a whore! We cheer as we lead! We act like we're on speed!" the squad cheers. "Hate us 'cause we're beautiful, well, we don't like you either! We're cheerleaders! We are cheerleaders!"

This dream sequence has everything pop culture reviles about cheerleaders. In the rather insensitive words of Sparky, the male choreographer who later comes to help the team at the center of the film, cheerleaders are "dancers who have gone retarded."

It's a feeling the film winks at constantly. It even deploys it as a recurring punch line, especially in characters like Courtney and Whitney, two squad members who are ditzy and bitchy to a fault. That they openly talk about sex further bolsters the stereotypes from that opening cheer. ("I swear I'm not a whore!") This first dream scene even ends in a sexual spectacle, with Torrance (Kirsten Dunst) finding herself topless in front of the entire school.

The film that follows features short skirts, girl-on-girl in-fighting, sports bras, lines like "This is not a democracy, it's a cheerocracy," a romantic subplot and even a carwash scene with the lead girls in swimsuits. It makes arguing for Bring It On as a feminist film perhaps harder than it should be.

Yet Jessica Bendinger's script asks us to rethink the vapid stereotype of the cheerleader. She reworks the cheerleader figure from a mere accessory to male fantasies and male sportsmanship into a well-rounded team player intent on athletic perfection.

Big Red (Lindsay Sloane), the outgoing cheer captain of the Rancho Carne Toros, is presented as someone who "puts the 'itch' in bitch" and who has "no feelings," "only testicles." Her leadership comes from using (and emulating) the men around her while profiting from the women of color whose choreographies she constantly steals. She embodies the very things about a woman in a leadership role that pop culture tends to both exult and condemn.

Structurally, then, the film sets up a narrative away from Big Red and what she represents. Instead, we get Torrance and Isis (Gabrielle Union). These two team captains are self-assured female role models. Their feminine attire, playful attitude and seemingly inane sportsmanship don't preclude their own autonomy over their bodies or their ambitious drive towards being the best.

In scenes that present cheerleaders as sexual objects — groped by fellow team members or ogled by football fans — the film stresses the girls' own agency. We see this in punchlines like "You were having cheer-sex with him!" Levied at Torrance as she unwittingly flirts with Cliff (Jesse Bradford), this pun nevertheless locates her as a willing and consensual partner. She is not a girl up for display who should know better than to parade herself in front of men who might get the wrong idea. She knows what she's doing.

Even Missy (Eliza Dushku), who begrudgingly joins the squad, presents the fundraising carwash scene in words that clearly point to her own agency: "[I'm] making money from guys ogling my goodies." She's not ashamed, but self-aware about how she can get it done with what she's got.

More importantly, the film continually asks us to take Torrance and cheerleading seriously. Mostly because of the sports' girlishness, its peppiness and its seeming lack of intellectual rigor, it's not the easiest task. "OK, so I've never cheered before. So what? How about something that actually requires neurons?" Missy asks.

In this, Bring It On takes on the very debates that have plagued feminism for the past century: in its call to be taken seriously despite being something that caters to and centers on girls, in its thorny relationship with budding female sexuality, and ultimately with its attempts at understanding how issues of race and class intersect within female-only spaces.

This is perhaps what made reviewers so anxious about what they saw on the screen. If Isis, Torrance and Missy are indeed "adolescent dominatrices in athletic halter tops" and "buffed and polished trophy vixens who reign over a take no prisoners consumer zone," as Owen Gleiberman wrote in Entertainment Weekly, we may do ourselves a service by pausing on his very language. Therein lies the transgressive feminist streak that Bring It On embodies.

Ultimately, Bring It On is a film about "girl power." About the power of being a girl. For all its cheers and pompoms, it sure works hard at unpacking difficult, often contradictory visions of feminism and femininity that, thanks to the teenage girls' sports romp packaging, make it all the more transgressive and worthy of celebrating.

Bring It On is available to buy on iTunes and rent on Amazon.