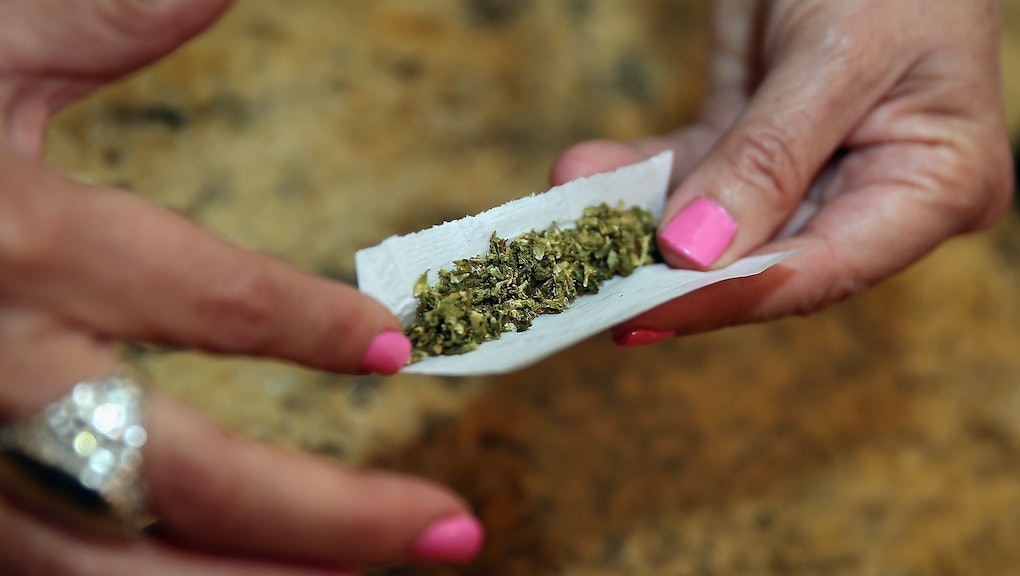 "Wow, you're really bad at this," my mom said, watching me as I tried (and failed) to roll a joint on the kitchen counter. "Move. Let me do it."

She took a seat beside me while my sister and I looked on, grabbing a packet of Zig-Zags and pulling out a new rolling paper. My mother, who hadn't smoked weed in 20 years, managed to get every last bit of the schwag I'd procured into a neat little pile in the center of the paper. Then she rolled one of the most expertly handled joints I'd ever seen.

When my mom handed me the joint, I took a single baby puff, then immediately started coughing like the newb that I was. I was 20 years old, and I was mortified that my mother was so much better than me at getting stoned.

"I guess dad and I don't have to worry about you becoming a pothead," my mom said.

Turns out, getting high with your parents can be way less awesome than you might think. Sometimes, it's just a bizarre rite of passage.

One toke over the line: Given that the legal status of marijuana varies from state to state, it's tough to find statistics about how common it is for family members to smoke weed together. But according to a 2015 cannabis consumer report, an estimated 1 in 10 parents smokes marijuana and plenty of potheads admit to smoking with their kids once they're of a certain age. It happens frequently enough, and even if a young stoner has (pipe) dreams of sharing a joint with their parents, it doesn't always go down as people expect.

Mic spoke with several young adults who have gotten lit with mom and dad at least once, and most said they had high expectations for the experience. But when they finally sat down to smoke, though, the entire situation was...kinda uncomfortable.

"The whole thing lasted three minutes, was very awkward and we never talked about it again," Eric*, 26, said of the first and only time he smoked with his mom. "I didn't enjoy it. I thought it was funny, but that's just not a part of life we need to participate in together."

My editor, EJ, felt similarly about getting high with her dad. "When I turned 18 we started smoking weed together occasionally, when one of us had it," she said. "At the time, it felt like I was cool and I had cool parents. Now it kind of weirds me out. It feels incestuous in a way? It's like I'm broaching these really weird unspoken boundaries."

These boundaries are easy to cross, given the strange, maybe even regrettable things people say when they're blazed out of their minds. "It was a great experience smoking with my mom for the first time!" Tom, 29, told Mic. "However, after getting high, I felt open enough to tell her that I don't believe in the Jesus thing anymore. Probably not the best timing... it was Christmas Eve."

So...why do it? Although getting stoned with your parents can be totally bizarre and disconcerting, it can (obviously) be rather enjoyable. There's a feeling of camaraderie that arises from family toking, or from partaking in any activity with one's parents that is generally not allowed at the kids' table. There's a sense of being seen as an adult and being treated accordingly.

"Usually your parent feels obligated to take on the role of the mature caretaker, but when you're high, your filter is a little lowered," one 27-year-old told Mic. "It would be great to be in the same mental state as your parent and have a true one-on-one conversation with no topic being off limits."

It can also be humanizing. My sister, Lindsay, said that smoking weed with our parents helped her see them more fully and get to know them as "real people, not just mom and dad."

"With the weed came stories about what they used to be like before they had kids," Lindsay said. "Before they just kept that part of themselves from us. I think they also started to see us as adults."

Smoking pot together certainly isn't the only way to reach that level of maturity (nor is it necessarily the most advisable). It can, however, feel like a more productive step toward seeing your parents as human than, say, watching your divorced parents start dating again or finding out one of them might have cheated.

At the end of the day, they're still parents. Of course, growing up can't change one very important thing: We're always going to be our parents' kids. No matter how much marijuana might help us develop more mature views of our parents, it's ultimately impossible to escape the parent-child relationship. Condoning mild drug use might indicate that our parents accept us as being old enough to make our own decisions, but they can still be critical of our choices.

"My parents and I both smoke weed but we don't do it together," Ali, 21, told Mic. "Due to my family's weird 'don't ask don't tell' policy about almost everything, we don't talk about it."