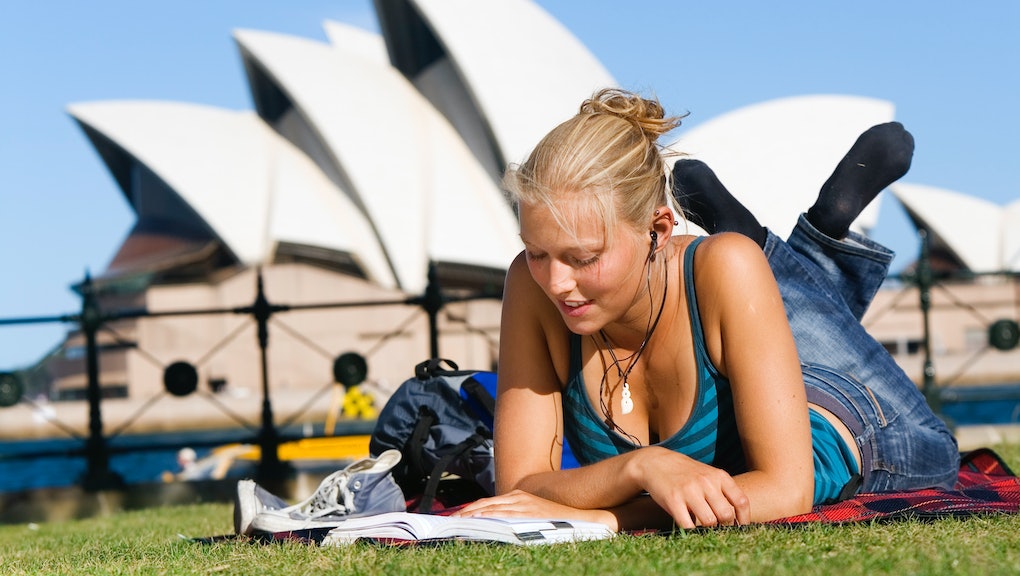 When college students travel to foreign countries for a semester or a year abroad, there's a common expectation that they'll return with a more cosmopolitan outlook.

Whether motivated by a desire to immerse themselves in a new language and culture, forge an exotic romance, or simply drink under a foreign skyline, students anticipate some kind of widening of their horizons. Under the spell of unfamiliar customs and landscapes, in this narrative, students shed their provincialism and see the world as held together by more shared values than they previously believed.

In an article for the Washington Post, political scientist Calvert Jones explains that, by some measures, studying abroad can in fact have the opposite effect.

The study: For a study published in International Studies Quarterly, Jones surveyed college students at 11 universities across the U.S. She compared students who had yet to study abroad and those who had returned from their time abroad, and found that some of the most common assumptions of the effects of travel to be thrown into question.

One thing she tested was the "core liberal hypothesis that cross-border contact promotes a sense of shared international community." This idea holds that immersion in a foreign culture will break down stereotypes about differences between cultures and ultimately breed a sense of greater shared understanding and values.

But Jones found that returning students described themselves as having fewer values in common from the country they visited than students anticipating their visit abroad:

Another striking finding of Jones' study is the way studying abroad can shape nationalism. Many might suspect in that living abroad would chip away at the self-regard that Americans are so famous for, but in fact it often does the opposite:

Jones found that experience abroad boosts pride rather than dampens it:

Students returning from their study abroad experience were considerably prouder of America along a range of dimensions, including its literature, achievements in the arts, armed forces, athletic accomplishments and political influence. They were also prouder to be American, warmer toward American culture and more patriotic.

But this nationalism doesn't take the form of jingoism or explicit arrogance. Returning students "did not display a heightened belief in America's superiority," Jones wrote.

In terms of their sense of whether their host country was dangerous, returning students described their host countries as less dangerous than students about to go abroad. On the matter of threat perception, cultural exchange did tend to have the effect that many would expect it to.

Jones' findings are compelling. In her view, the identity of American students returning from living abroad is best described as "enlightened nationalism — a sharper sense of national difference, and pride in that difference, tempered by tolerance and the realization that such differences need not be threatening."

That's not exactly in keeping with the idea that travel always lays bare the universality of human experience. But experience is certainly a better reason to see cultures that are very different, rather than being predicated purely on fantasy or fear.