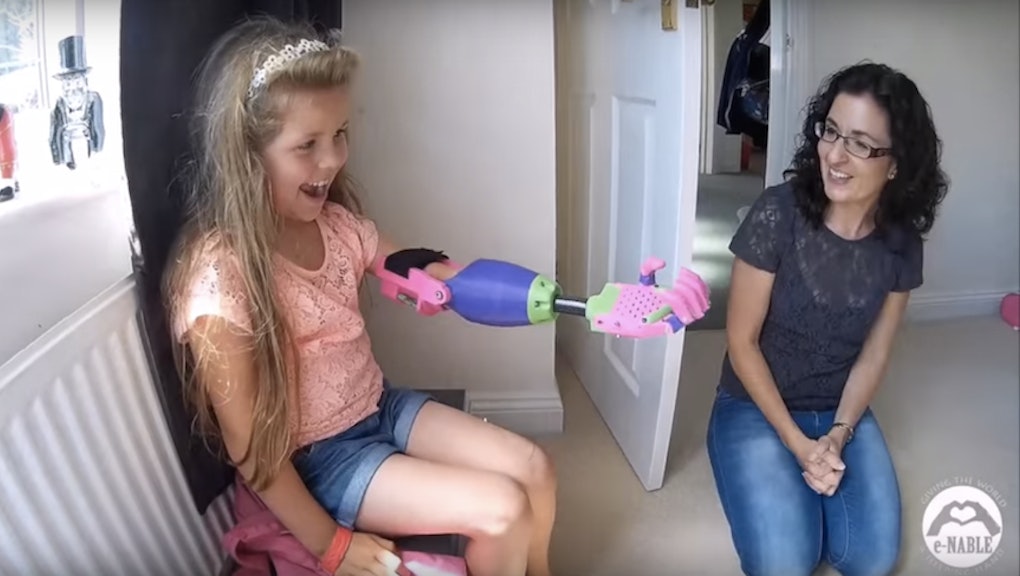 Isabella was born missing her left hand and part of her forearm. When a group of volunteers at the nonprofit E-Nable asked if the 8-year-old would like to have a second hand, she jumped for joy. And when she put it on for the first time, she couldn't contain herself.

Thanks to E-Nable, an organization of engineers, medical professionals and philanthropists who 3-D print arms to those in need, recipients like Isabella have been given functioning limbs entirely for free.

On Thursday, Stephen Davies, who prints these 3-D arms with fellow E-Nable volunteer Drew Murray, posted a video of Isabella opening her gift from the organization and using it to carry a toy. Isabella squeals with delight as she marvels at the pink, blue and green arm and its functionality.

The two volunteers, who go by the name "Team Un-Limbited," shared on the E-Nable blog that Isabella's father says she has been picking up objects and testing the device as she employs muscles she's never used before.

"The impact on Isabella's confidence is was almost immediate," Isabella's father told the team. "She's never been a shy girl but we are aware ... when she is conscious, particularly in public places where she tends to get the odd unwanted stare or whispered question. The gadget is so bright and bold that she insisted on wearing it to the local supermarket straight after she got it and proudly strutted around wanting the world to see it."

What's more, the volunteer who provided Isabella's arm is actually an E-Nable recipient himself. Davies, who is also a parent, uses an E-Nable 3-D printed arm and works with a British charity called Reach in order to contact and send his gifts to children suffering from upper limb deficiency.

Check out the video of Isabella trying on her arm for the first time below: