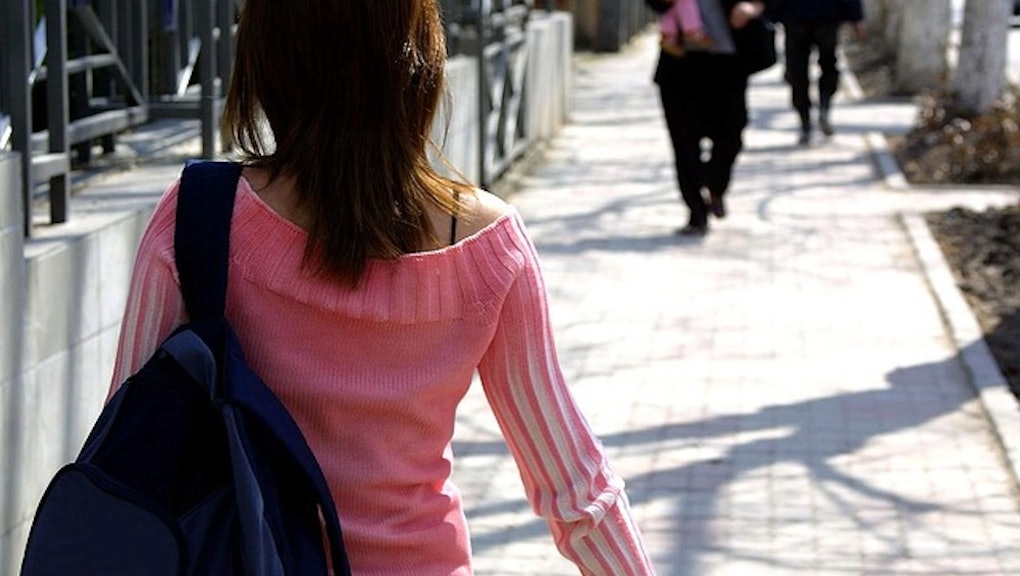 9 Times Women Struck Back at Their Creepy Street Harassers

In her teens and 20s, Holly Kearl didn't realize what she was constantly in public was street harassment. She didn't know it had a name, or that it was a common experience for women all over the country.

"Victim-blaming and minimizing street harassment are both very common all over the world, and as a result, many women stay silent about what they experience," Kearl, author of the upcoming book Stop Global Street Harassment: Growing Activism Around the World, told Mic. "They learn to adapt in ways that limit their lives but may help them feel safer."

After encountering websites like the Street Harassment Project and Hollaback!, however, she began to research the problem and even wrote her master's thesis at George Washington University on the topic. Her work culminated in Stop Street Harassment, a website and blog offering resources, support and a forum to allow individuals around the world to share their stories.

Sharing the story: Speaking or writing about one's experience, Kearl said, allows individuals to take back their power, work through the upsetting experience and help other harassed people feel less alone.

"There is a lot of victim-blaming and shame when it comes to street harassment, but when we read or hear others' stories and realize that we're not being singled out, that it's happening to so many other people, we often find the strength to speak out and challenge it," she said.

In this spirit, here are nine stories women shared with Stop Street Harassment about their most empowered responses to harassment, originally featured in 50 Stories About Stopping Street Harassers.

When she realized what was he was doing, she shouted at him. No one else on the car reacted, however, so when he tried to bolt off the train, she said she went into "She-Hulk" mode and lunged at him as he tried to run away. She called the police and held onto him, berating him for his actions.

The police charged him with open and gross lewdness, and he was ordered to stay off the train in the future.

The story made the local news, and the woman told the news reporter that she acted because, "I've had enough of being harassed on the street. I'm tired of it, and I want it to end. It was the last straw."

2. New York: "You probably have a daughter older than me."

"You've got great legs, baby!" a man in his mid-40s said to Brittney, a 15-year-old girl, as she waited for the subway on her way to school.

"Excuse me, you probably have a daughter older than me," she said.

"Sorry, you just look so sexy in that schoolgirl outfit. I couldn't help it, and you do have great legs," he told her.

Unwilling to let him off the hook for his lewdness, Brittney said, "Sexual harassment is a crime. Leave me alone, or I will report you."

Then, she said, the harasser hurried away.

As Jane was leaving work, a man in a white van, who was stuck in traffic near her, honked his horn and leaned out of the window to wolf-whistle and shout at her, "Nice bum!"

She stopped, glanced back at him and shouted, "Bald head!"

He looked affronted, she said, so she quickly responded with, "What? I thought we were just exchanging observations?" and kept walking.

4. Atlanta: "We're taking pictures of everyone who harasses us today."

Whenever Melissa and her then-girlfriend walked through a certain park, they faced a lot of street harassment.

What Melissa and her girlfriend found was that once people got caught doing something inappropriate, most of them became apologetic or at least embarrassed.

Nour, a teenager, experienced street harassment for years, but the idea of responding to a harasser had always scared her. She kept quiet, until this incident.

As she walked along a busy street, a young street vendor on the sidewalk said to her, "Hey baby, look at me. What's up honey? You're so pretty," and then followed her.

She said, "I stopped walking, and I shouted, 'Stop it, now!' and looked him straight in the eyes. To my amazement, and his astonishment, he did. He froze and swiftly turned his head away, so bystanders wouldn't realize I was addressing him. And finally, for once, I felt vindicated. ... It took me 18 years to summon the courage and power to yell it out, to defend myself."

Usually when JT experiences street harassment, she said she feels frozen with fear, but that changed during an experience on a bus.

A man approached her on a bus, asking if he could ask her a question. Preparing to give him directions, she said, "OK," only to hear him ask, "Can I have a pair of your panties?"

She said, "Excuse me?" and he repeated his question.

That's when JT raised her voice and exclaimed so the whole bus could hear, "Excuse me, did you just ask me for a pair of my panties? How dare you!"

Everyone stared at him, and he leaped out the door of the bus and ran away. She said, "That felt more good than embarrassing."

As Nayana was walking down a very busy road and talking on the phone, she said she suddenly felt a man "feeling up her front" with his hand. Shocked, she saw his smirk, which looked like he knew he'd get away with this harassment. That's when, she said, "something snapped in my head."

She grabbed his collar and pinned him down, while shouting, "Police! Police! Help!"

People gathered around her to help. Law enforcement arrived, she reported the incident and he was taken into police custody.

She grabbed her cell phone and took a photo of the man, Daniel Barricella, 59, of Brooklyn. She reported him to the dean of her school. The dean called the police, but she didn't see the man in a collection of photos they showed her. The next morning, a detective went with her to the subway station, and she spotted the harasser. The detective arrested him.

Barricella was charged with public lewdness, sex abuse and harassment.

"I was scared," she told the New York Post, according to Stop Street Harassment. "He didn't look creepy; he just looked like a normal man. I reported it to the police to keep him off the streets, so he can't do it to anybody else. The technology really makes a difference."

9. Maynooth, Ireland: "It's not so nice when someone touches you without permission, is it?"

Christine was at a nightclub with a friend when a man groped her friend's breast, then smiled as he walked away.

Her friend froze in shock, but Christine said she ran after him, reached around him and grabbed his balls. She said, "He doubled over, and I held on as I leaned in and spoke directly into his ear: 'It's not so nice when someone touches you without your permission, is it?"

She said she walked away, and when she turned back, he looked very confused and uncomfortable.

Christine said, "I don't think it was necessarily the right way to handle the situation, but there is a part of me that thinks, hopes, the guy never gropes a woman again after my response. And I felt empowered for all the times I've been groped and was too shocked to do anything about it at the time."