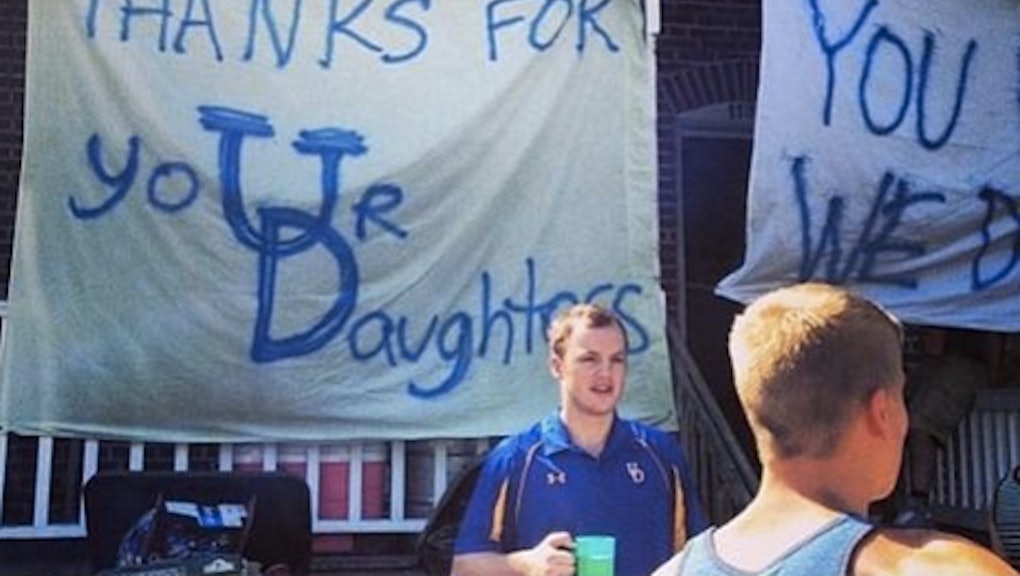 But while many fraternity members across the country have acted in ways that have understandably established them as breeding grounds for sexism, sexist attitudes on campuses manifest far beyond the Greek system. Here are a few common ways sexism exists in college beyond the obvious, according to the women who are currently experiencing or recently have experienced them.

"Last semester, I was in a class with 26 people where 21 of them were male," Lily Herman, Wesleyan senior and founder of student-run college access website The Prospect, told Mic. "Additionally, all but four students in the class were white."

This wasn't the first time Herman attended a class like this; it happens often, especially in areas of study where women are being encouraged to pave the way specifically because of their historical absence. In science, tech, engineering and math fields, for example, women received only 19.2% of engineering degrees in 2011, and women of color earned only 3.1% of bachelor's degrees in engineering the following year, according to the National Girls Collaborative Project. This isn't limited to STEM, but also extends other male-dominated majors that lead to higher-paying jobs.

What's more, female students feel marginalized not just on the level of their peers, but also in that they don't see themselves reflected on all levels of an institution.

"Diversity in gender representation among faculty would be nice — particularly female professors of color," Columbia University senior Darializa Avila-Chevalier told Mic. "This is not to say that my white cis male professors were not qualified to teach subjects on race and gender — I've learned a great deal from them. You become more aware of the lack of diversity in faculty as a whole when very few of the classes you've taken on race and gender have been taught by non-white and/or non-male professors."

This particularly gendered and racialized feeling of marginalization does little to encourage female students to feel comfortable, nurtured and, ultimately, thrive.

Men feel disproportionately entitled to dominate the space and voice their opinion.

The conversation about mansplaining may not have originated on college campuses, but it's certainly relevant and uniquely realized there.

"In some of my male-dominated classes, I have noticed that male students tend to interrupt female students more than their male peers, and they mansplain basic concepts to them," Herman said. "I once had a guy in one of my advanced government classes try to mansplain the structure of the American legislative system to me; that was pretty funny (and insulting)."

Recent Hiram College graduate Kati Dlugosz echoed that sentiment, telling Mic, "The men in my classes seemed to feel entitled to every discussion, even if it was not related or had nothing to do with their opinion."

Avila-Chevalier also agreed, but noted that the problem may in fact be more complex than just a matter of female silence and male dominance. While women have vocally disagreed with her and voiced their own opinions more generally, women students' comments are usually only taken seriously when "the professor, TA or a male classmate repeats or validates" them, she said.

These attitudes aren't just evident in classrooms, either. In a meeting of her first sketch comedy troupe, University of Toronto sophomore Celeste Yim came prepared with written sketches, although many of the male members had not, she told Mic. They then proceeded to heavily edit her material and became "defensive, and worse, dismissive" when she advocated for her work.

"Even though I knew that I could speak rightfully about my own work, it made me wonder whether I was being abrasive or bossy," Yim said. "I felt guilty, ashamed and powerless, when I was the one who had put in the time writing for our entire group. The boys' reactions made me feel like I was speaking out of turn, when I was simply sharing my opinion. There's something about the solidarity amongst a group of men that feels impenetrable for a woman like me, who is eager to speak up."

Although class is (supposedly) the focus of one's college experience, women often encounter sexism beyond the classroom — especially when it comes to sex.

Women are punished when they have sex, Dlugosz said, "scorned and villainized as being 'loose,' 'easy,' 'wanting attention,' 'not valuing herself' and being a 'whore.'" But they are also, she said, looked down upon if they abstain: "If she embraces her sexuality, she's still considered a whore or easy. If she doesn't, she's prude. The sexism involved in the double standard makes the playing field a puzzle for women to navigate," she explained.

Bro culture prioritizes masculine standards and pits women against one another.

In addition to the age-old sexual double standard, college women are increasingly caught in a double standard of bro culture: They're expected to be feminine and sexually attractive, but also act like "one of the guys" and party right alongside their male friends.

This could explain why women now outpace men in binge drinking on college campuses: As U.S. News & World Report noted, this is likely not due to a gender-based alcohol problem, but instead a result of women consuming drinks one-for-one with their male friends despite hormonal and metabolic differences that comparatively decrease their tolerances for alcohol.

Women who play into bro culture may want "to be more accepted by men, but are at the same time objectified and belittled and devalued by the same system," Dlugosz said.

In addition to putting women at physical risk, bro culture can promote among competition among women.

"Some women on campus try to be 'one of the guys' and play into bro culture, while others openly despise it and are therefore in conflict with those women who choose to partake in bro culture," Herman said. "It's yet another example of how women are pitted against one another all because of the choices of men. It also calls definitions of feminism into question: Is it more feminist to go against women who are fine with 'bro culture' (and may be hurting other women in the process), or is it more feminist to allow women to hang out with whomever they want, even if that involves 'bros'?"

Sexual harassment and violence are still a reality.

Once a school becomes aware of potential sexual harassment or assault on campus, it's required by Title IX to investigate the situation and protect its students, according to the American Association of University Women. And yet, as plenty of campus activists have made the public aware, this is hardly always the case.

In fact, a recent study found that an estimated 15.3% of freshman women alone reported attempted or completed rape during their first year on campus at a school in upstate New York.

The fact that this gendered violence persists is only compounded by the fact that is inadequately handled or dismissed altogether by administrators. In fact, as Five Thirty Eight reported in March, an Insider Higher Ed study found that while about a third of U.S. college presidents agree sexual assault is a problem on college campuses across the country, only 6% believe it persists on their own campuses.

"There are of course still people at Columbia who don't take issues like that of sexual violence seriously," said Avila-Chevalier, who is involved in anti-campus sexual assault activism on Columbia's campus. Efforts to ensure survivors' education is not impacted by the gendered violence inflicted on them, like trigger warnings, "are often mocked by students and even entire departments," she said.

Though they are certainly pervasive, far too many college women seem to accept this these persistent, underlying forms of sexism as the status quo rather than push back on them. It's time to start a conversation and recognize that the often subtle, everyday sexism women face should be no more accepted than obviously gross banners.