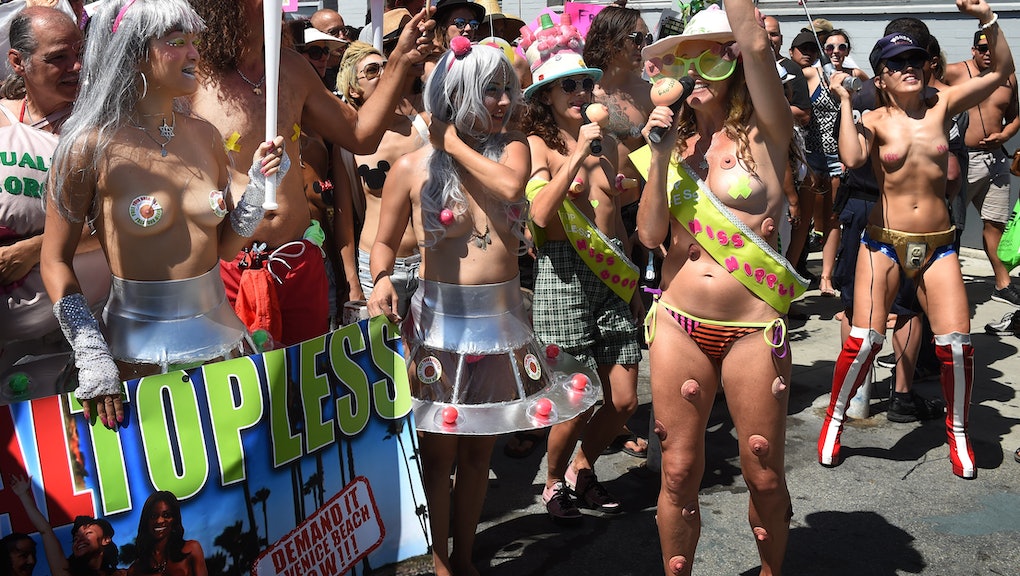 Protesters marched through New York's Manhattan borough on Sunday to demand freedom — freedom for women's nipples, that is.

The purpose of the so-called Nipple Pride Parade, part of the worldwide GoTopless Day event, was to destigmatize women's breasts. It came amid the ongoing debate over whether women should be barred from baring their breasts in public, something that's actually been legal in New York since 1992.

Last week, Mayor Bill de Blasio took a stand against Times Square's topless entertainers, women who wear patriotic body paint instead of shirts and ask tourists for money in exchange for their photos, according to the New York Times. He said New York would  no longer "tolerate" the women and vowed to find ways to regulate their activities, the Observer reported.

Other lawmakers echoed the mayor's sentiments. "People come to Times Square from all over the world because it is a little quirky and slightly chaotic and because there's some allure to that," City Council member Corey Johnson, whose district includes Times Square, told the New York Times. "But if it becomes unsafe and creepy, that becomes a problem that we have to address."

Sunday's demonstrations were aimed at bringing to light what activists have called the double standard of laws and social rules that allow men, but not women, to go shirtless in public, NBC News reported.

"There should be no reason why my breast should be any different from his chest," a woman at demonstration in Denver told CBS 4. Such demonstrations have been going on for at least seven years, NBC News reported.

Organizers have said the event is about removing the "shame and guilt" attached to women going topless in public. "For 23 years, New York has been a beacon of topless equality," Rachel Jessee, New York's GoTopless leader, said in a statement. "But few women exercise their topless rights in New York even now. Shame and guilt are deeply ingrained, and they find it hard to break free. The purpose of the Nipple Pride Parade is to empower them to overcome those feelings."