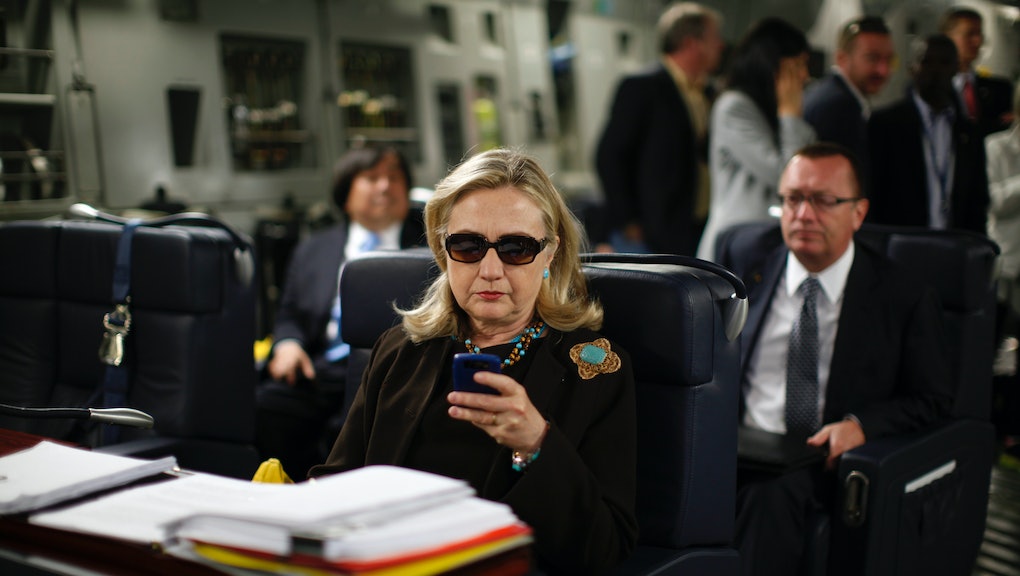 Twitter is already a battleground in the 2016 election. The microblogging service lets public figures bypass the news-media circus and deliver messages straight to the public. It's the perfect hub for elaborate Photoshop digs and gems of sinister trolling. But the flip side of that coin is the irresponsible rhetoric, strange gibberish, misfires and gaffes politicians tweet by mistake — a truly unfiltered feed, all on display so the American people know what they're dealing with in a potential leader. Unless Twitter has anything to say about it.

Over the weekend, Twitter furthered its effort to protect politicians from transparency by cutting off Politwoops and Diplotwoops, two services run by the Open State Foundation that catalogued and exposed the deleted tweets of politicians and diplomats worldwide.

The service had already been shut down in the United States back in May, but this new decision extends the ban to 30 more countries where the service was operating, including the United Kingdom, Sweden, Turkey and South Korea.

"Twitter considers it a violation of their terms of agreement, but that was known for five years. Politwoops has worked for five years and has extensively been used and cited by journalists in various countries," Open State director Arjan El Fassed told Mic. "The question is, why did Twitter suddenly ... close down API access after five years [of it] being condoned?"

All users of the Internet are made alike, Twitter says. Not so, says democracy.

Twitter's explanation appeals to every user's worst fear: "Imagine how nerve-racking — terrifying, even — tweeting would be if it was immutable and irrevocable?" Twitter wrote to the Open State Foundation when it said it would be cutting off access. "No one user is more deserving of that ability than another."

But there's one group Twitter's really catering to, and it's not you and me. Twitter proudly announced two weeks ago that it was expanding their services for brands to help them plug into, search and exploit the massive database of 200 billion yearly tweets.

That announcement begins by praising the user information available to corporations:

Dr. Carl Sagan once famously said, "You have to know the past to understand the present." For brands to most effectively analyze Twitter data in the present, they also need to know what's happened in the past.

All users of the Internet are made alike, Twitter says. But democracy says that isn't so. When politicians communicate as part of their job, the people of an open democracy get to hold on to those records. It's why, when reporters discovered Hillary Clinton had maintained a private email server, it set off a political scandal we're still talking about today.

"Unfortunately, Twitter's decision to pull the plug on Politwoops is a reminder of how the Internet isn't truly a public square," Sunlight Foundation president Christopher Gates wrote in June.

There are no similar, hard rules that say that politicians, in the use of their personal Twitter accounts, are public servants. But Silicon Valley corporations are working to tip the scale in favor of the powerful.

Why? That's easy. Business isn't good, and Twitter needs to find a way to make money. Aside from running advertisements and promoted tweets, which aren't working very well, selling their entire firehose of data so that marketers can use Twitter to surveil customers is one of Twitter's only useful business propositions.

"What politicians say in public should be available to anyone."

By using Twitter, we're all collaboratively building a database of information. This move demonstrates Twitter's ranking of who should have access to it. At the top are corporations, and at the bottom are regular users like you.

There's one way to fend for ourselves: Delete all of your tweets in protest. Ever since Twitter built out its brand tools, deleting every tweet you've ever made has become a trend. Some influential Twitter users in technology and media have purged their feeds. As the Awl's John Herrman wrote, it doesn't matter how edgy or how tame your feed is — tweets devoid of context feel like "a stupid way to represent yourself to the world."

That you might be able to explain [your tweets] if asked, or reconstruct the context, is irrelevant, because that's not how they'll be experienced: they'll show up in a search, where their decontextualized strangeness, failing to rise to the level of actual inquiry, will nonetheless leave some kind of impression.

After all, people should have control over their autonomy and public identities. But politicians are not like the rest of us.

"What elected politicians publicly say is a matter of public record," El Fassed said yesterday on the Open State Foundation website. "Even when tweets are deleted, it's part of parliamentary history. These tweets were once posted and later deleted. What politicians say in public should be available to anyone."