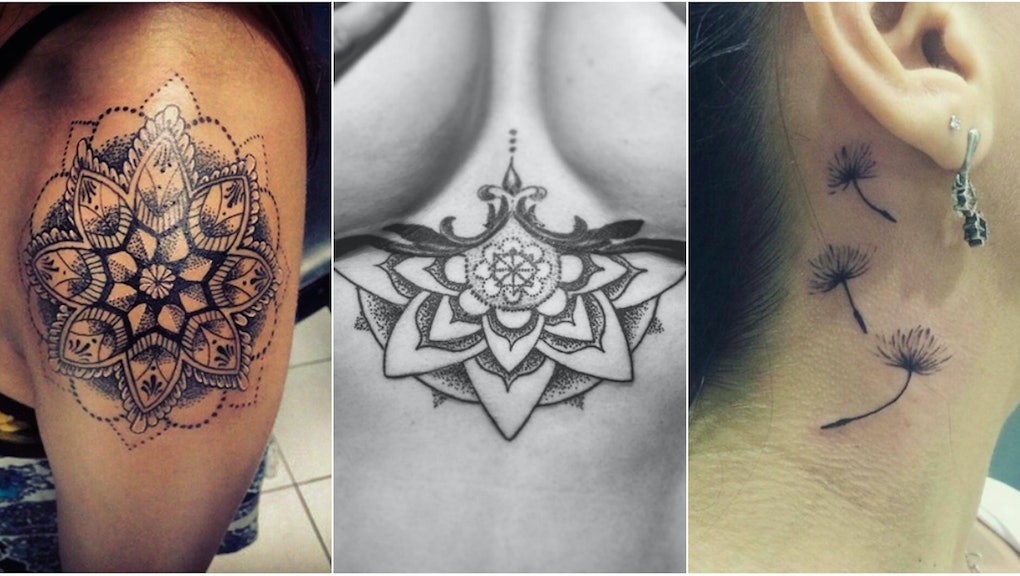 About to Get a Tattoo? Here Are the Most Popular Designs Today

The concept of tattoo "trends" might seem ironic given how permanent, inherently, they are. But for many, tattoos are accessories. They are like any visual accoutrement one might wear to solidify a look.

"It's fashion that you can kind of place on yourself," is how Kate Shrapnel, head of sales for No Ka Oi Tiki Tattoo in Philadelphia, described the ink millennials love so much to Mic.

In fact, tattoos are a fashion trend, and it's exploding. Thanks to social media, tattoo artists like Shrapnel told Mic that the industry has grown immensely, and new customers who might not have gotten inked a decade ago are lining up for tats. Having more inked-up peers, plus seeing more photos float around the trending pages on Instagram, Pinterest or Imgur, are prompting more people to hop on.

"Despite the fact that there are more tattooers and more accessibility than ever before in Western history, tattoo designs have never been more repetitive or insular in terms of style and subject matter," Dave C. Wallin and Betty Rose, from the Eight of Swords Tattoo shop in Brooklyn, New York, told Mic via email.

To get to the bottom of the trends dominating the scene right now, Mic spoke to a few tattoo shops in U.S. cities plus did a little Internet digging. Here's what we're aching to get inked.

We're turning our bodies into art with paint-like watercolors.

So-called "watercolor" tattoos get their name from their resemblance to an actual watercolors, complete with liquid splashes of color. Black is rarely used, and the designs are meant to evoke a look that feels as if the tattoo artist was sketching a piece of art on paper instead of skin. Since they're mostly done with colored ink and without black lines, the designs can be risky business, Shrapnel said. Plus, the sun makes them fade quickly.

Called "sacred geometry," these are the modern-day version of the '90s tribal armband, said Shrapnel. Customers will come in to the shop with plenty of questions about the style, which features many perfect circles and lines, but often opt out of getting the tattoo. The challenge? The cost, space and time needed to ensure the work comes out just right, Shrapnel said.

"Doing concentric circles or just perfect circles in general, perfectly straight lines, things like that, are some of the hardest tattoos to do in a technical sense," she said. "Every one of those lines is a breath hold from the artist who goes, 'Oh, OK, perfect.'"

We're devoting ourselves to our literary obsessions.

Within the pages of every book, there's probably a quote worth getting inked. The past few years have seen this trend come to the fore.

As Mic's Rachel Grate previously noted, "Bookworms aren't the immediate mental go-to when thinking of a person covered in tattoos, but a quick dive into Tumblr and Pinterest proves that assumption to be very wrong. After all, a tattoo is for life, and what better way to celebrate a book that changed your life than to partake in the most literal form of self-publishing?"

We're wearing our feminism on our sleeves.

As in, the likes of Rosie the Riveter and Supreme Court Justice Ruth Bader Ginsberg. Feminist tattoos don't always need to be in your face — just see these delicate designs — but they can be as bold as a protest. Each one sends a message or pays homage.

"I think it's a lot about respect," Rachel Fink, who has a Ginsberg tat, told CNN. "People on social media and my generation have taken to her." What better way to show your devotion to a feminist hero?

"They are very difficult to do, so if you have a tiny tattoo that is really well done it's like having a piece of jewelry. You know, like an expensive piece of jewelry," Yunda said. Cara Delevingne's intricate lion head on her finger is the perfect example.

We're inking every nook and cranny (underboob, anyone?).

Perhaps the most dramatic trend in tattooing hasn't come from any particular design, but the location. More people are getting tattoos that are in highly visible locations like the neck and hands, a previously unheard of location for most, Yunda said. Thanks to celebrities like Rihanna, the hands and the area under the breasts have become prime locations, tattoo artists said.

"Now, it's so common that you see this kid with a neck and a hand tattoo and their whole arm is clean," Yunda said. "Before, getting a tattoo like that was definitely like a job-stopper."

We're using our ink as beautiful tributes to life.

Often times, tattoos hold a particular meaning for the wearer, whether it's commemorating a particular person or a moment in time. For a particular subset of women who've undergone a mastectomy after a breast cancer diagnosis, tattoos that cover the breast scar tissue can help with the psychological aftermath, as Mic's Natasha Noman previously reported.

Tattoos, after all, are a reminder — who wouldn't want a constant symbol of strength and resilience held close to their heart?