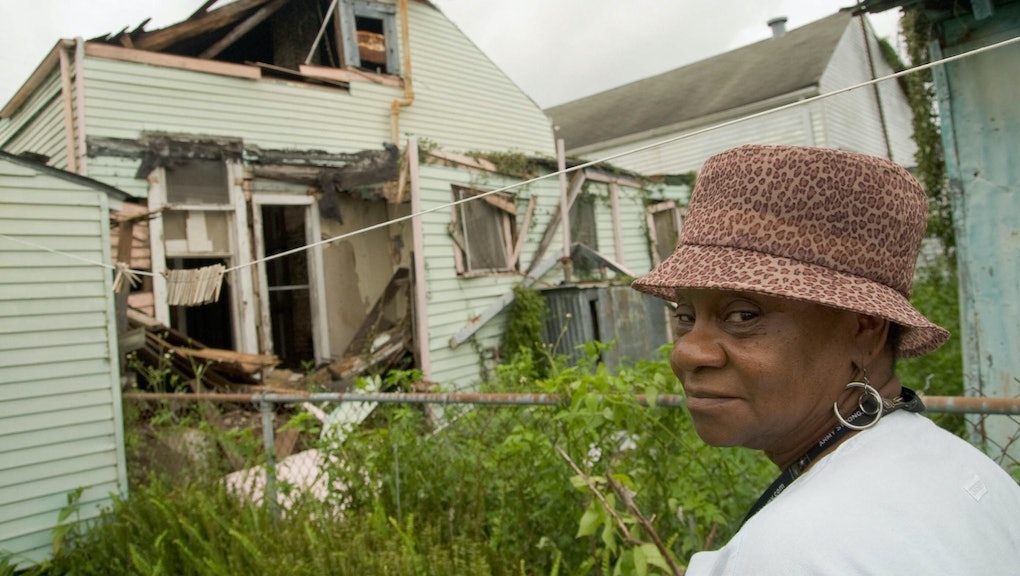 New Orleans' famous Bourbon Street paints a colorful picture of the city — one steeped in tradition and filled with contagious energy:

Such is the mental image that subconsciously pops up for so many tourists and New Orleans outsiders. It lives on despite Hurricane Katrina's devastating effects on Louisiana's largest city in 2005, which was immortalized in other iconic photos:

The storm was responsible for killing nearly 2,000 people and displacing hundreds of thousands more. It caused more than $100 billion in damage. Grass grows high over the lawns of abandoned homes, along desolate street blocks covered in graffiti. And many properties have been left to rot, completely untouched.

If you visit the city and stay on Bourbon Street, it can be easy to forget this. But if you veer off the beaten path and trek through some of New Orlean's lesser tourist-traveled areas, the memories and effects of the storm remain inescapable. Here are 11 images of New Orleans that confirm this:

An abandoned home destroyed by Hurricane Katrina in the lower Ninth Ward of New Orleans, taken near the storm's 10-year anniversary Aug. 15, 2015.

Boxing instructor Harry Sims, 62, walks his students past a blighted building Aug. 14, 2015. Sims started the boxing club following Hurricane Katrina to keep children in his neighborhood off the streets.

Some family homes with fully paid mortgages didn't have flood insurance when the storm hit. Here, steps lead to the empty foundation of a home 10 years later as a brand-new charter school is being built behind the abandoned property.

Although New Orleans has regained some of its infrastructure, the city is still smaller in size and population than it was pre-Katrina, as seen in this side-by-side comparison of downtown New Orleans immediately after the storm and 10 years later:

A home still waiting to be demolished by FEMA 10 years after the hurricane hit New Orleans. Many complained that emergency responses to the natural disaster weren't swift enough, leaving hundreds of thousands of residents displaced.

It's not just homes. An entire strip mall in New Orleans is still left abandoned 10 years after the storm hit.

Garbage from the polluted waters that covered 80% of New Orleans in 2005 still piles along city streets, waiting to be removed.

A homeless man sleeping in an abandoned home nearly six years after Hurricane Katrina hit New Orleans. Ten years later, the city is still figuring out how exactly to deal with many problems, including housing, homelessness and crime.