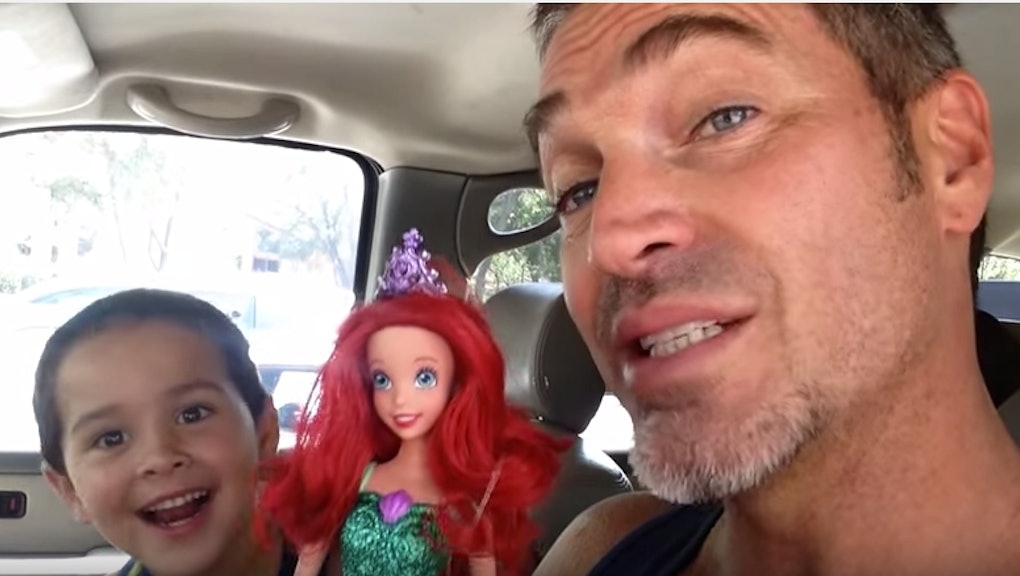 This Dad's Reaction to His Son's 'Little Mermaid' Doll? "Yeah!"

A father could react any number of ways to his son picking out a Little Mermaid doll instead of an Optimus Prime figure, but one dad just set a standard for dads everywhere.

In a video Mikki Willis posted on Facebook Friday, he and his sons Azai and Zuri are returning from a trip to the store to exchange a gift 4-year-old Azai received for his birthday. "Now how do you think a dad feels when his son wants to get this?" Willis says to the camera, holding up Ariel doll.

"Yeah!" the boy enthusiastically shouts into the camera as his dad happily joins in.

"I let my boys choose their life," Willis says. "We say, 'Yeah, choose it. Choose your expression, choose what you're into, choose your sexuality, choose whatever.'" The message has clearly resonated, because the video has already garnered more than 11 million views on Facebook as of Monday afternoon.

On Monday, Willis told Mic he's thrilled that his message resonates with so many people. "To know we've touched people beyond our immediate community is both humbling and awesome!" he said in an email. Willis said when his son first picked out the doll, he asked him, "Why don't we chose a more realistic doll?" He said he doesn't want his sons to "adapt to the programming that a women should be built like a Barbie." When Azai insisted on the Little Mermaid doll, Willis said, "I backed off, knowing this would be the catalyst for us to have a fun conversation about the beauty of body types and racial equality."

Willis said he and his wife Nadia made a conscious effort to form their sons' view the world. "She's my superhero," he told Mic. "Together we made a commitment to raise our boys outside of traditional rules, and instead, from our natural intuition."

Willis and his family are not alone in wanting to create a world where his child can make decisions without fear of judgement. After complaints started flooded in on social media after Target differentiated between "building sets" and "girls' building sets," the store got rid of gender-segregated toy aisles. As more consumers demand more choices, the corporate world will have no choice but to follow the demand.