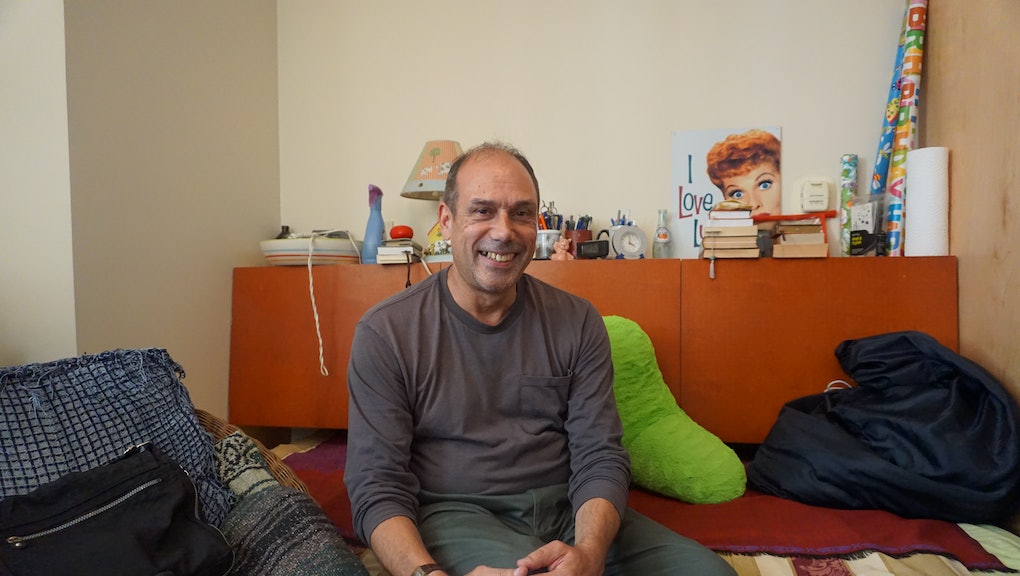 Willie Risher didn't have a good start in life.

He began drinking beers and smoking joints when he was 9 years old. He dropped out of school in 9th grade. He took some mechanics classes, and drifted in and out of construction jobs. Substance abuse problems followed him into adulthood. Eventually, he took up crack cocaine, and soon the few things that he could cling to in life slipped through his fingers.

Tormented by his addiction, Risher spent over 20 years on the streets, with sporadic stints in homeless shelters and jails in New York City. The shelters were sometimes worse than the streets. "Every time you went in the bathroom someone was in the next stall smoking crack," he told Mic in an interview.

When he wasn't staying in shelters, Risher would sneak into hospitals and office buildings to shower. He worked odd jobs, taking gigs handing out fliers. But every step he took to build a stable life ultimately fell prey to his addiction's voracious appetite.

"It robs you of everything. It didn't want to kill me, it just wanted to torture me," Risher said.

Everything changed 11 years ago, when a social worker connected him with a representative from a housing organization. After agreeing to some guidelines, Risher was set up in an apartment of his own for the first time in decades. With a roof over his head, he began keeping a regular schedule of meetings with therapists and employment specialists. His addiction faded, and he was able to find regular work.

Nowadays, Risher leads a quiet life, working in Times Square and living in his small Manhattan studio apartment, which is filled with a motley collection of sentimental artifacts: model cars, dream catchers, multicolored ceramics. To relax, he reads. He's especially fond of books about psychology.

"Quality of life has become 101% better," Risher, 52, said while sitting in his home. "I didn't see where I was going to go until these people came. God sent them to rescue me."

At a time when cities across the country are passing draconian laws intended to crack down on the homeless, Risher's story shows a different path. His experience points to the effectiveness of two simple policy prescriptions to get people off the streets: giving the homeless permanent housing, and directing targeted assistance to those who need it the most.

The housing-first model: Risher lives in an apartment managed by Common Ground, a New York-based nonprofit organization founded in 1990. The group's "housing-first" philosophy holds that the root causes of homelessness, especially chronic homelessness, can't be overcome without first satisfying the homeless' most basic needs: safety and survival. It's a critique and reversal of the conventional view that homeless people must improve themselves before finding a permanent place to live.

"Give somebody stable housing, and give them all the support, and that's when you're going to get people that are going to be able to move forward with their lives," Brenda Rosen, president and CEO of Common Ground, told Mic.

Common Ground owns and manages more than 3,200 housing units in New York and Connecticut. All tenants pay rent, but their sources of income vary. For low-income residents who work, about 30% of their income goes toward paying rent. For the chronically homeless without jobs, the organization helps them apply for benefits from various public assistance programs.

Common Ground field workers roam the streets of New York 24 hours a day, seeking out potential candidates for assistance. They look for the most vulnerable members of the city's homeless population: those with mental health issues, serious diseases or substance abuse issues. Common Ground estimates that more than half of homeless single adults in the U.S. fall into one or more of those categories.

It's not always easy to convince the people they encounter that supportive housing is a good option. The process is about building trust, which can take weeks, months or years of meetings and psychiatric consultations on park benches and street corners. People who have been on the streets for years are often rightfully skeptical of advocates who promise them a roof over their heads, given their sometimes traumatic experiences in conventional homeless shelters.

"I started to drink full time," Muff told Mic. "I got involved in crack. I became homeless ... I thought the time had come."

After a case of viral meningitis led to a brush with death, Muff began to turn his life around. He started going to Alcoholics Anonymous and eventually got sober. After seeing a flier for Common Ground's supportive housing, he worked with a social worker to apply for an apartment. He moved into a studio apartment 11 years ago and has been living there ever since. Muff doesn't have steady work, but his health has improved dramatically in the years since gaining access to supportive housing.

"I'm very grateful to the services that have served to keep me alive," Muff said. "I take the medication everyday. I go to the doctor regularly. I get lab work."

Muff and his fellow residents benefit from extensive psychiatric and primary medical care offerings available through all Common Ground buildings. Residents are also encouraged to participate in a host of community activities, such as gardening, cooking classes, book clubs or exercise.

Now, Muff focuses on health and advocacy work. He goes to several AA meetings a week and works on political campaigns for supportive housing, which rally around the belief that "housing is fundamental to health." His apartment, while small, is in a good part of town.

The results: Common Ground's approach is working. Only 1% of their permanent residents leave each year. On top of that, the program is cost-effective.

"The initial studies show that, for every person given housing and support, we're saving roughly $10,000 a year versus if they were still on the streets, cycling through hospitals and jails," Rosen explained.

When living on the streets, the homeless frequently visit emergency because they can't take care of basic mental and physical health problems, or just need a warm place to sleep for the night. But the preventive care provided in permanent supportive housing drastically cuts down on the frequency of those emergencies — and saves taxpayers money in the process.

For groups like Common Ground, whose funding comes predominantly from the city, state and federal governments and from investors through the sale of low-income housing tax credits, more could be done to make sure there's money for the services vital to supportive housing.

"The city has definitely put a lot of capital behind affordable housing — and supportive housing is part of that — but you can't close the deal on supportive housing without knowing where your service dollars are going to come from," Rosen said.

The case for the having the city commit more money to Common Ground and other organizations like it is not difficult to make. For progressives, supportive permanent housing is a humane and strong example of state-backed institutions engineering more successful outcomes than the market. Conservatives can take consolation in the fact that it saves money: Right-wing politicians like former President George W. Bush and the mayor of the first Canadian city on the brink of ending homelessness have championed some version of the policy.

In other words, Common Ground's model is common sense.