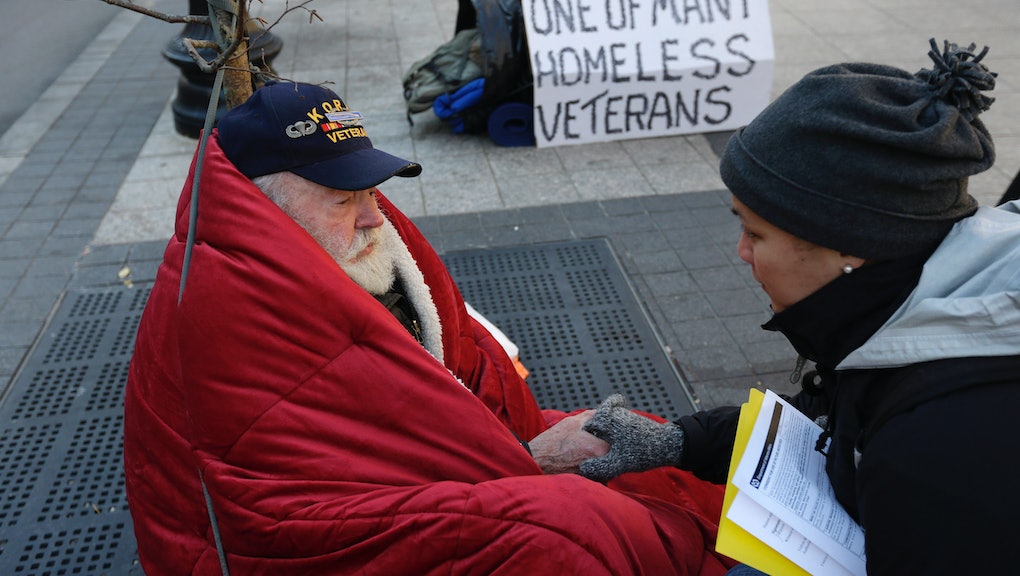 Hundreds of US Veterans Were Found Sleeping in the Woods. How Did We Let This Happen?

Over the course of the last month alone, more than 400 United States veterans have been found sleeping on the street and in the woods of central Florida, the Orlando Sentinel reported Aug 21.

The discoveries come amid renewed efforts by state officials to house all homeless veterans by the end of this year, the deadline for the Department of Veterans Affairs' End Veteran Homelessness initiative.

Florida, along with having some of the highest enlistment rates in the country, is one of three U.S. states with the highest percentage of homeless veterans. In January 2013, together with New York and California, it accounted for 44% of all veteran homelessness, according to the National Coalition for Homeless Veterans.

While the VA reports it reduced the level of veteran homelessness by 33% between 2010 and 2014, a chart from the Department of Housing and Urban Development's 2014 Annual Homeless Assessment Report shows that much work remains to be done. Nationally, last year there were close to 50,000 veterans on the street per night, with the NCHV reporting another 1.4 million at risk.

The causes of veteran homelessness are complex. "I don't think anybody for sure knows the answer," Steve Berg, a vice president at the National Alliance to End Homelessness, told Mic. He and other groups cite the unique burdens soldiers with combat experience face while reintegrating into civilian life.

In many cases, Berg said, returning veterans have a number of mental disabilities, like post-traumatic stress disorder, which can be compounded by the risk of substance abuse and lack of family support networks. "It is definitely the case that veterans have been overrepresented for a long time among the homeless population," he said.

Additionally, many veterans returned from tours of Iraq and Afghanistan as the U.S. was reeling from the effects of the Great Recession, with skills that were out of date or not applicable to the modern work environment.

The solutions are already in motion. The fact that hundreds of indigent veterans were found in Florida is, in fact, part of the state's answer, representing a region-wide sweep to find and document everyone who might qualify for assistance. With generous funding from the VA, local interests have gone a long way toward spearheading the effort.

"It's not so complex, literally, the solution to homelessness is homes," Evan Smith, a project manager at the Central Florida Commission on Homelessness, told Mic. "It was basically a massive outreach."

Through such outreach, which Smith called a "veteran surge," he and the commission were able to help identify the Orlando area's homeless veterans with just two weeks of sustained volunteer outreach. Those identified as veterans were placed on a registry and provided with housing vouchers.

Once they accounted for everyone, the commission worked with local landlords to place the veterans. With the backing of federal dollars, landlords, who might otherwise be skeptical of renting to the homeless, were made an enticing offer.

"They are the perfect tenant because at the end of the day, the rent is guaranteed. Nobody is saying that for me, at my apartment," said Evans. "[Plus] any incomes that they have, they are responsible for 30% of the overall expenditure on their housing."

Evans said the commission was committed to ending veteran homelessness in Orlando by the end of the year.

New Orleans: If Orlando is successful at ending veteran homelessness, it would owe a great debt to another city that achieved the feat earlier this year: New Orleans.

In January, the Big Easy reported every homeless veteran found by the nonprofit Unity of Greater New Orleans had been successfully housed. While keeping that number at zero will be an ongoing challenge, city officials are confidant they are up to the task.

"We developed a model that will not only help other cities end veteran homelessness, but can also guide our efforts in tackling the issues that face this nation's large homeless population," New Orleans Mayor Mitch Landrieu wrote in a op-ed to the Guardian in April.

A critical factor to that success was tactics. "The model is ... housing first," Sam Joel, Landrieu's main policy advisor on veteran homelessness, told Mic. "The basic idea of this is to get people off the street and to get people into housing so they can rebuild their lives." Like both New Orleans and Orlando, Houston has also ended chronic veteran homelessness, and housing-first action has been a instrumental part of the process.

"I think we can all agree that when our veterans risk their lives for this country and come home kissing the ground, none of them should ever have to sleep on it," first lady Michelle Obama said in April, theTimes-Picayune reported. With the pioneering efforts of cities like Orlando, New Orleans and Houston, that day could be soon approaching.