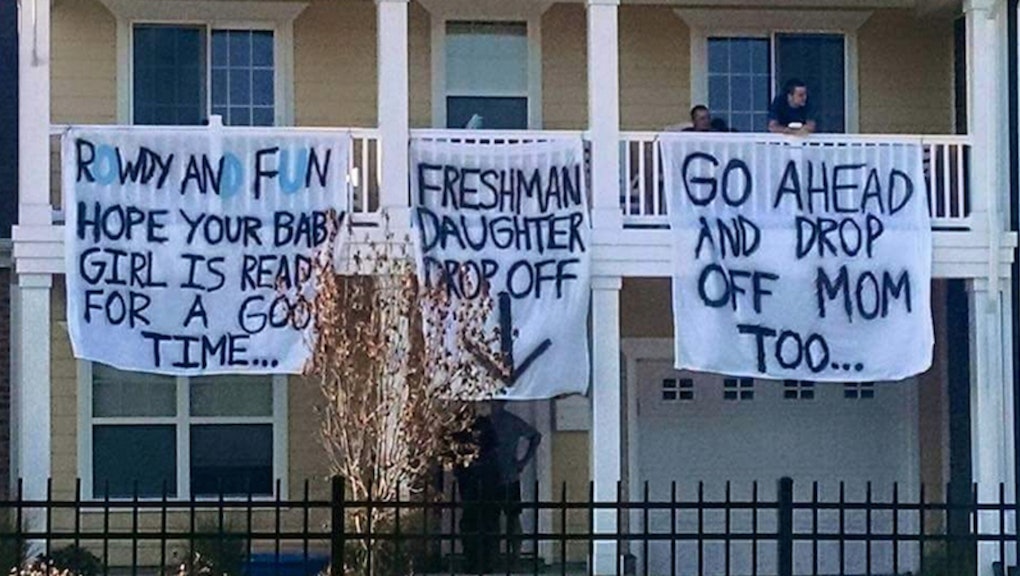 Even in the best of situations, dropping off a child at college can be a stressful experience.

But some students at Old Dominion University in Norfolk, Virginia, apparently decided to make "welcome week" a little worse for parents and arriving freshmen. Banners hanging from a private off-campus residence welcomed the delivery of a new class of young women with spray-painted slogans like "Rowdy and fun. Hope your baby girl is ready for a good time," "Freshman daughter drop off" and "Go ahead and drop off Mom too."

Jezebel reports the three signs appeared at a house where several members of the ODU chapter of Sigma Nu live, providing a photo from the chapter's official Twitter account as evidence.

The banners quickly earned the condemnation of university staff, including president John R. Broderick, who posted the a statement to Facebook promising the incident will be "reviewed immediately" and "any student found to have violated the code of conduct will be subject to disciplinary action."

Another Sigma Nu chapter at the University of Central Florida recently found itself in hot water after a student videotaped members of the frat, including a man accused of sexual assault, chanting "let's rape some bitches" at an off-campus party.

The signs that appeared at ODU aren't the only ones popping up on the nation's campuses. Total Frat Move posted a few other photographs apparently showing similar incidents at other colleges, describing them as "hilarious."

The signs are a tone-deaf message to send at a time when fraternities are coming under fire for numerous documented incidents of racist and misogynist behaviors.

The Guardian wrote last year that fraternities' contribution to rape culture is significant, noting "numerous studies have found that men who join fraternities are three times more likely to rape, that women in sororities are 74% more likely to experience rape than other college women and that 1 in 5 women will be sexually assaulted in four years away at school."