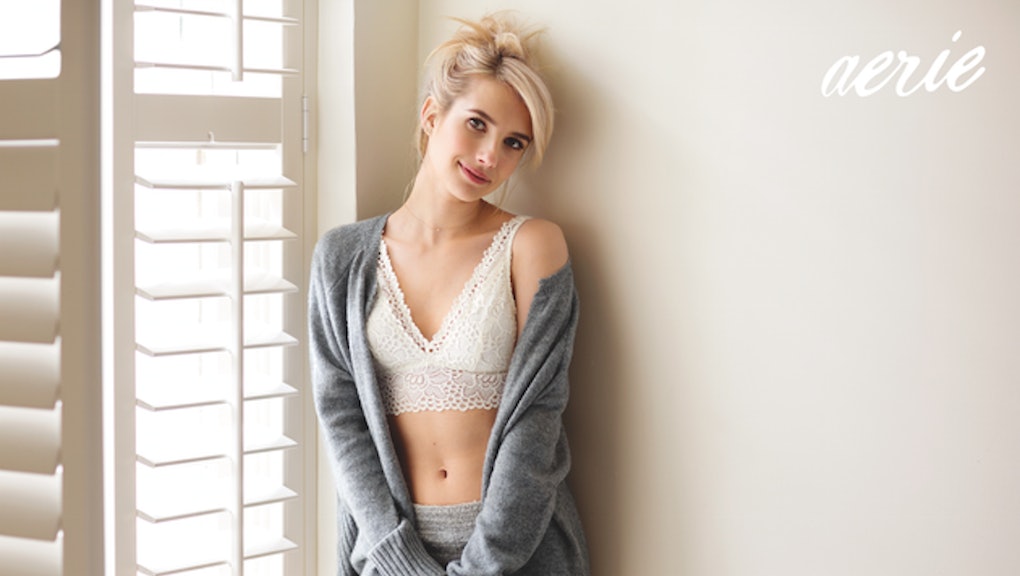 Aerie has taken its signature unretouched ad campaign to the next level with a celebrity spokeswoman.

Emma Roberts of Fox's Scream Queens is posing for the lingerie company, which is a younger, hipper, more Instagram-ready sister of American Eagle. Given its hipper status, Aerie has embraced a no-airbrushing, "real" stance in its #aerieREAL campaign, showcasing models in past advertisements without digital retouching, with wrinkles, folds and tattoos exposed.

Now 24-year-old Roberts has embraced the ethos, sharing her "true self – unfiltered, unphotoshopped, unretouched" in a campaign shot by photographer Ali Mitton, she told USA Today.

"It's important for me to be a part of this, because I see how hard it is for girls my sister's age with social media, and feeling like they need to look a certain way," Roberts told Refinery29 back in July, when the campaign was announced. "I want to promote the idea that it's okay to look like yourself — you don't have to Photoshop your Instagrams!"

"I want to promote the idea that it's okay to look like yourself — you don't have to Photoshop your Instagrams!"

It's a point worth making, considering that Photoshopping your Instagrams is real. Our personal retouching goes beyond Instagram filters and careful Facebook cropping; now the power of airbrushing is in our hands via apps like Perfect365, which stars like Kim Kardashian reportedly use on their selfies.

It's never been easier to make ourselves more beautiful — or, of course, to strive to meet strict beauty standards. Critics of Aerie's original campaign pointed out that the company had selected a narrow variety of girls, most of whom possessed proportional bodies with a lone "imperfection," such as a stomach roll or tiny stretch marks.

It's easy for a company to go airbrush-free when the model in question already has a "perfect" body. As anyone who's seen red carpet photos of Roberts knows, the actress is slender with delicate limbs and a petite build, not to mention fair skin and shiny blonde hair — all features which, by the fashion world's strict expectations, already make her a good model candidate.

But baring your body for the camera clad only in a bra and undies isn't necessarily easier the smaller you are; having a size 2 or size 4 body doesn't make you immune to body insecurities.

As BuzzFeed put it, "While Aerie's models are gorgeous women without Photoshop, it probably sends a better message than the alternative": distorting women's bodies into figures so perfect, they can never truly be attained in real life. Knowing you're fine the way you are, sans airbrushing or dieting or Spanx, is a message worth sending to girls reading magazines and scrolling through Instagram at home.