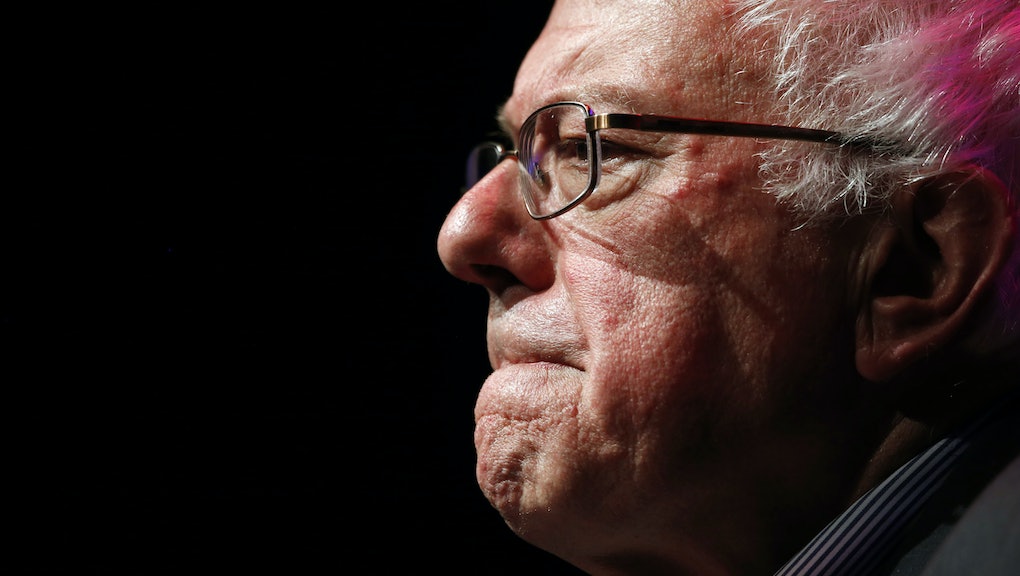 In 2014, Gallup ranked the great state of Vermont the "second-most liberal" in the country. On its surface, the label seemed to fit: 30% of people polled identified as "liberal." Progressive darling Bernie Sanders has represented Vermonters in the U.S. Senate for eight years as a "democratic socialist," and now spearheads one of the more galvanizing presidential campaigns in recent memory.

Vermont was the last state to let a Wal-Mart operate within its borders. Its banner export — Ben and Jerry's Ice Cream — routinely champions progressive causes. It was the first U.S. state to abolish slavery, award a college degree to a black man and establish legal same-sex marriage without court intervention.

But with a population that's almost entirely white — 95.2%, according to 2014 Census estimates — and consists of just over 626,000 people, the brand of sequestered, small-scale liberalism that Vermont represents has rarely been tested by the strains of racial diversity. As such, a question arises: How does the state's progressivism apply across racial lines?

One possible answer lies in the numbers: According to data from Vermont's Department of Corrections, this liberal enclave has one of the most disproportionate rates of black incarceration in the country.

Black Vermonters make up just 1.2% of the state's general population, but 10.7% of its incarcerated population. This means that, proportionally, there are nearly 10 times more black people locked up in Vermont's jails and prisons on a given day than there are walking its streets.

Few criminal justice scholars or workers in Vermont seem able to explain how this happened. The black incarceration rate grew faster here than in any other in the state between 1993 and 2007, before it leveled out and stayed relatively constant. But shortly before its peak, the Sentencing Project reported that Vermont had the second-highest black-to-white incarceration rate in America — topped only by Iowa, another state with a small black population.

Monica Weeber, administrative services director at the Vermont Department of Corrections, said it's hard to parse where this disparity sources from. "I don't really have the knowledge to speak to it specifically," she said. "But it's clearly a systemic issue. Different people will give you different responses — but honestly, at the D.O.C., by the time people come to us the decision to incarcerate them has already been made."

Neither Matthew Valerio, Vermont's defender general, nor Robin Weber, director of research at the Crime Research Group — a Vermont criminal justice think tank — could point to specific policies that might have led to such rapid growth. "I have no information as to why," Valerio said. "The simple answer is that there's bias in the system. But it could also be coincidental."

Weber added, "We are concerned that there appears to be a racial disparity. But you're also working with really small numbers here, so it's hard to tell."

The confusion is felt on the ground level too. Curtiss Reed, executive director of the Vermont Partnership for Fairness and Diversity, a state-wide racial advocacy group, said that it's hard to draw anything conclusive from these figures. "The devil is in the details," he said. "And we don't have all the details."

Reed added that the data "needs some clarification." On a social level, he says, a culture of suspicion still defines many white Vermonters' attitudes toward black people.

But at the same time, internal diversity within this black population — "Republicans, fundamentalist Christians, refugees, liberal Democrats" and others — plus what Reed sees as a notable level of black representation in local politics, complicates the narrative of a segregated and heavily policed black underclass that defines many other American states and cities.

"For the most part, we are at the table when policies are drummed up," he said. "The data doesn't tell the whole story yet. Maybe it never will."

In spite of this confusion, familiar patterns persist in Vermont. Rashad Shabazz taught at the University of Vermont's geography department before becoming an associate professor at Arizona State University's School of Social Transformation. He says that black Vermonters' "hyper-visibility" in an extremely white context is a trump card, bringing its own set of concerns for black people, regardless of other social factors.

"Black people have not been spatialized [by segregationist policy] in Vermont the way that they have been in, say, Chicago or New York City," Shabazz said. "They don't have that same history. But Vermont reflects the same criminal justice trends as elsewhere. People of color still find themselves under the heavy scrutiny of the police."

The most telling trend in criminal justice encompasses more than just the corrections system.

"Each time you point out a data set individually, like the jail numbers, you have people saying, 'But we have so few people in these facilities — how can we know?'" Allen Gilbert, executive director at the ACLU of Vermont, said. "But when you look at the broader picture, there's a major consistency: Black people are treated very differently than white people in Vermont."

The evidence is damning: In 2009, apparent racial bias led the Vermont Advisory Committee to the U.S. Commission on Civil Rights to recommend voluntary data collection by law enforcement divisions statewide. If nobody took the initiative, the advisory committee recommended imposing mandated collection anyway.

Some police departments responded. The Vermont State Police, the Burlington Police and four departments in Chittenden County all opted to collect their own data. Much of it is still being analyzed, years after the fact. But all exhibited clear racial disparities in traffic stops, meaning that black people were either more likely to be stopped, or more likely to be searched after being stopped.

Then there was USA Today's recent analysis of FBI arrest data from 2011 and 2012. According to that report, black people in Burlington, Vermont, were arrested at a rate of 243.2 per 1,000 people. The rate for Ferguson, Missouri — where similar disparities prompted uprisings and a Department of Justice investigation last year — was much lower, at 186.1.

And in January, Vermont Legal Aid released a report which found that black public school students were up to three times more likely to be suspended as white students in 2011-12, placing them at greater risk of exposure to the criminal justice system than their white counterparts.

It's worth noting that the small number of black people in Vermont does mean that even a tiny bump in arrests, for example, can have huge implications in terms of percentages. Yet from traffic stops, searches and arrests to school suspensions and incarceration rates, the sheer variety of these racial disparities remains undeniable as a whole.

This does not mean that Vermont is uniquely horrible for black people. It simply means that Vermont is not exempt from the same manifestations of racial inequality that define the rest of the country, even if many Vermonters have trouble agreeing how it came about. This is especially important to recognize in an era when Black Lives Matter activists are chastised for disrupting Bernie Sanders at rallies in Seattle and elsewhere, on the grounds that he is their "best friend" of the 2016 presidential field, and that his economic liberalism de facto translates to racial equality.

Considering the patterns, this much seems clear: "Liberal" does not automatically mean "good for black people." Vermont may be Vermont. But it is also still America.