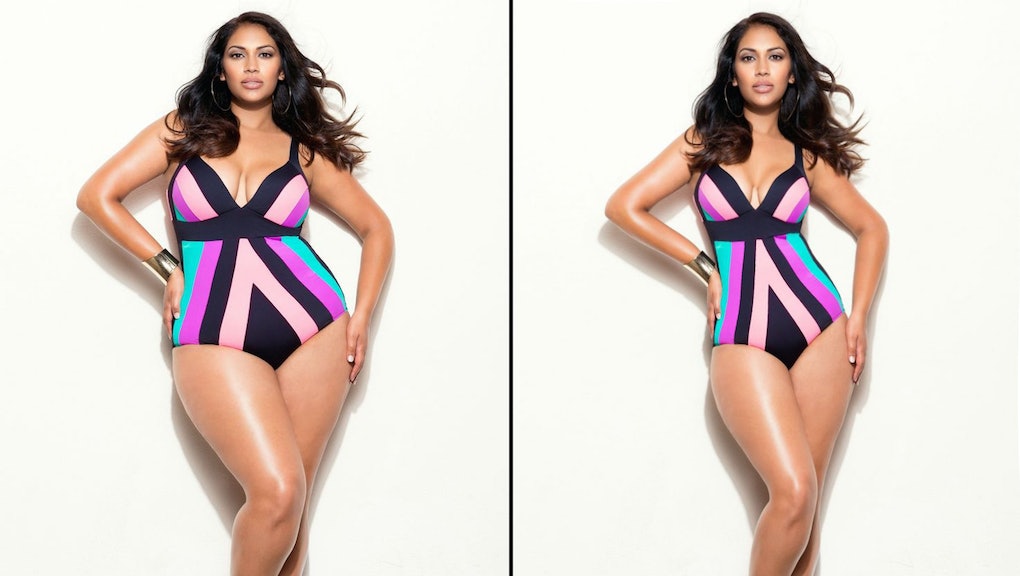 For every plus-size model breaking boundaries like Tess Holliday, there are 100 Internet trolls. Or, at least, that's what a new Internet movement known as Thinner Beauty would suggest.

Thinner Beauty endeavors to "help" plus-size women lose weight. It does this by offering Photoshopped images of what they could look like if they were thinner.

"We do this [encourage them] by showing how much more beautiful they could be if they made the difficult, lifelong commitment to a regimen of personal fitness," reads a banner on the group's subreddit.

The movement is operating on many platforms, with Facebook, Instagram and Twitter pages (all three of which have been removed), a subreddit, a Twitter hashtag and its own website. It's also affiliated with Project Harpoon, which has the same mission and bases their name off the "man the harpoons" meme, which consists of pictures of people considered overweight (suggesting they are whales and should, therefore, be harpooned).

The Thinner Beauty website features a gallery of "before and after" photos: Plus-size women's bodies are dramatically manipulated to take on very different shapes

While the Project Harpoon Twitter account (whose profile picture is a whale) was suspended, the hashtags #ProjectHarpoon and #ThinnerBeauty are still being used to fat-shame plus-size individuals. Such posts often involve photos, too.

However, many people have also expressed outrage over the movement, using the relevant hashtags to condemn it on Twitter.

While this movement is shrouded in the guise of health concerns (helping people with "the difficult, lifelong commitment to a regimen of personal fitness"), it appears to humiliate the subjects more than anything else.

Tess Holliday publicly chastised Project Harpoon's Facebook page, before it was taken down, for manipulating an image of her.

"It's abominable that this [Facebook page] is using my image without permission to promote themselves," Holliday told E! News. "This kind of hit piece is exactly why I started #effyourbeautystandards. I am asking my followers to boycott this [page] and any others like it. Loving yourself is the most powerful message we all need to stand behind."