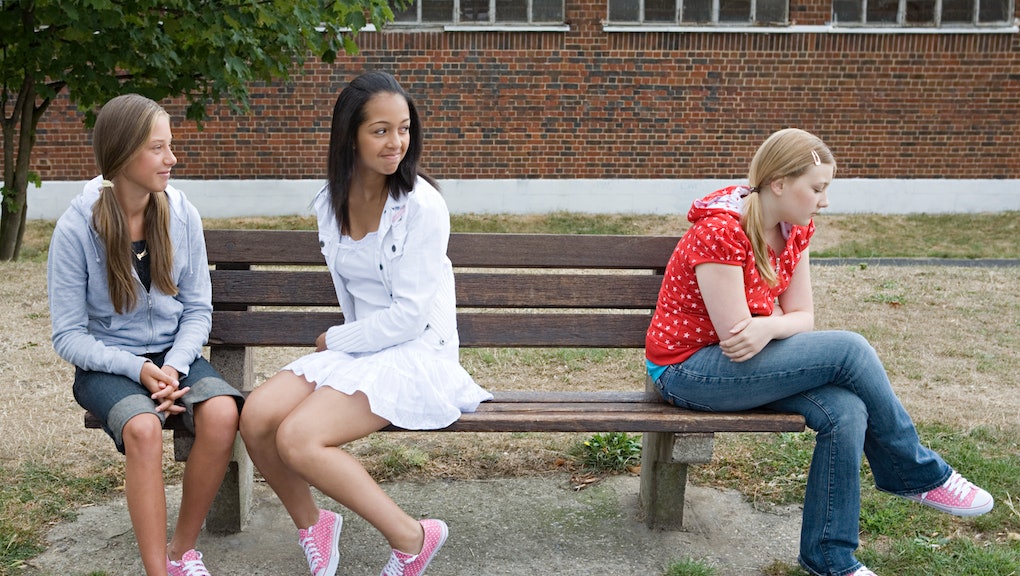 Study Proves That Teen Slut-Shaming Is Alive and Well

"If you look back in history, it's a common double standard of society: The guy gets all the glory the more he can score, while a girl can do the same and yet you call her a whore."

So proclaimed pop goddess Christina Aguilera on the track "Can't Hold Us Down" off her seminal album, Stripped, all the way back in 2002. But if you were starting to hope that our culture's slut-shaming tendencies had died with X-Tina's "Dirrty"-era skunk 'do, new research suggests that's unfortunately not the case.

The double standard is still alive and well, especially among teens.

The study: Pennsylvania State University researchers observed their subjects during a five-year period. A group of 921 students who were between 11 and 16 during the time of the study answered survey questions and named their closest friends as a way for researchers to gauge peer acceptance during each school year. The survey included also questions about sexual habits.

Interestingly, researchers also found that girls experienced a 25% bump in peer acceptance for "making out" with guys, while boys who only got to first base dropped 29% — indicating that while girls are encouraged to be sexual to gain popularity points, they're strongly discouraged from actually having sex.

"Our results are consistent with traditional gender scripts," Derek Kreager, the study's lead author and an associate professor of sociology and criminology at Pennsylvania State University, said in an American Sociological Association release.

"Men and boys are expected to act on innate or strong sex drives to initiate heterosexual contacts for the purpose of sex rather than romance and pursue multiple sexual partnerships," Kreager said. "In contrast, women and girls are expected to desire romance over sex, value monogamy, and 'gatekeep' male sexual advances within committed relationships."

Double standards are damaging. While we might be tempted to chalk up this study to inherent discrepancies in adolescent male and female sexual desire, research has consistently shown us that this is not the case. Studies have proven that guys aren't as animalistic and sex-driven as we want to believe, while women often have really strong sex drives.

But even with recent coming-of-age films like Diary of a Teenage Girl making the case that young women are just as driven by sexual curiosity as young men are, we're still taught that while it's OK for teenage boys to be interested in sex, teenage girls with the same urges are sluts. The end result is that many of us buy into this insidious double standard for the rest of our lives, and women who try to own their sexuality face persistent slut-shaming.

With better sexual education and strong role models for female sexuality in pop culture, it's possible that one day the double standard can die a quiet death. But until then, we'll be listening to X-tina tell it like it is on "Can't Hold Us Down." On repeat.