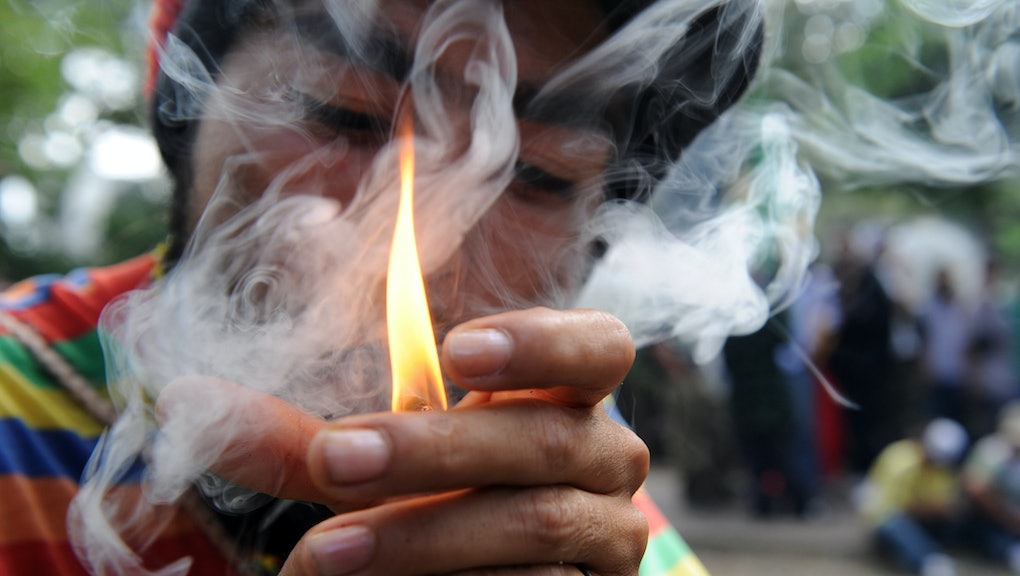 Legal weed is here in a big way. With four states (Alaska, Colorado, Oregon and Washington) and the District of Columbia already allowing recreational pot and growing majorities in favor of reform, the days of weed prohibition seem numbered.

But while public opposition to marijuana legalization is fading quickly, recreational marijuana remains illegal in the eyes of most states and the federal government. Transforming public support for legal weed into real reform is going to take continued advocacy, campaigning and evidence.

A recent report commissioned by the International Centre for Science in Drug Policy (ICSDP) on 13 common marijuana myths, however, should prove immensely helpful to anyone wishing to challenge those still in favor of prohibition. According to the report, most of the supposed science backing the war on weed is flimsy, false or open to scientific interpretation.

"Yet, the public discourse around cannabis is filled with frequently repeated claims that are simply not supported by the scientific evidence," ICSDP Director Dr. Dan Werb said in a statement. "Given that policy decisions are influenced by public opinion and media reports, there is a serious danger that misrepresenting the evidence on cannabis will lead to ineffective or harmful policy."

Here are five of the biggest myths from the review, debunked.

Marijuana is known to be psychologically addictive. The ICSDP, however, cites evidence indicating marijuana is much less addictive than most other drugs, including totally-legal alcohol, and that people who experience from marijuana addiction typically suffer less.

"For those that use cannabis for one year, and for those that use cannabis for ten years, 98% and 94%, respectively, do not become dependent," counter the researchers. "[...] cannabis use would be conceived along a spectrum ranging from non-problematic to problematic use [...] the negative consequences associated with cannabis addiction are far less than those associated with addiction to alcohol, cocaine or heroin."

Research simply does not back the World Federation Against Drugs' assertion the substance can "cause potentially lethal damage to the heart and arteries." While marijuana use has been associated with some effects that can cause heart attacks or stroke, "clear causal linkages have not been established" by rigorous scientific research, according to the report.

Instead, the report's authors write there is no evidence "low, occasional" use of weed impacts lung function, though the evidence is more mixed for heavy use. In either case, the report says both alcohol and tobacco have far more adverse health effects than cannabis, with tobacco in particular being far worse for the lungs and cardiovascular system.

3. It impairs cognitive function and damages your I.Q.

There is "little scientific evidence suggesting that cannabis use lowers general intelligence, as measured by I.Q.," say the authors, who point out that one highly cited study concluding frequent marijuana use lowers I.Q. by up to eight points only found that result among a "very small subsample of participants (i.e., 38 participants), representing 0.037% of the total sample."

On the other hand, better evidence exists linking alcohol use and early substance abuse in general to I.Q. declines. While the researchers admitted current science backs a link between marijuana use and cognitive function, "the evidence to date remains inconsistent regarding the severity, persistence, and reversibility of these cognitive effects."

4. Legalization would dramatically increase the availability of pot.

While police have been busy kicking down doors and arming themselves with military-style vehicles to interdict weed, the ICSDP says evidence suggests the supply of illegal marijuana may have increased across the country.

According to the report, "research indicates that since 1990, the price of cannabis has decreased while potency has increased, despite increasing investments in enforcement-based supply-reduction efforts," while a consistent 81-90% of 12th graders in the U.S. report they could easily access marijuana.

This scenario would only come to pass if the marijuana industry was allowed to proliferate on the same scale as Big Tobacco, which they call an implausible and "speculative" scenario.

The creation of a powerful marijuana lobby "is in no way an inevitable consequence of a regulated recreational cannabis market," the researchers write. "By allowing governments to control the conditions under which cannabis is sold, regulatory models that avoid such an outcome can be employed" such as advertising restrictions, product labeling requirements or various kinds of regulated sales models like size limits or state-owned dispensaries.