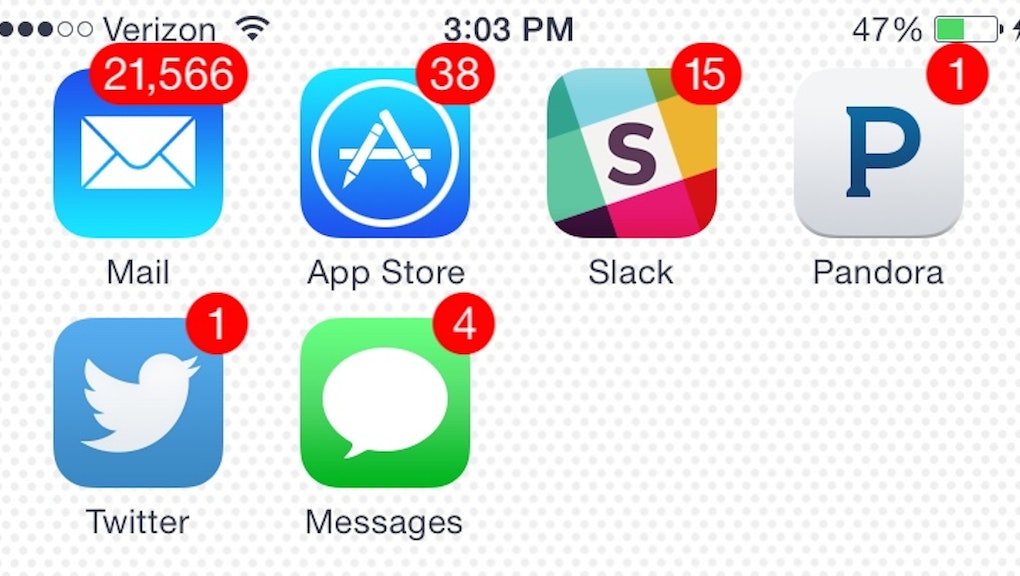 I Thought Turning Off Notifications Would Make Me Happier. It Drove Me Crazy.

A few weeks ago, weary from the working world and sick of New York City's sweltering heat, I took a vacation. It was my first in five years, and before I left, I decided I would use the week to disconnect from the outside world, because existing on and performing for the Internet all day long can suck your soul dry.

When the plane took off, my phone was stowed in my bag with the knowledge that I would only check it when I really, desperately needed to — otherwise, it would stay under lock and key.

As it turned out, I didn't need what I imagined to be a superhuman amount of self-discipline, because my phone inexplicably stopped working on day one. But while my initial response was one of shock — sheer, hand-wringing, how-am-I-going-to-get-anywhere terror — the next morning, I felt free. I didn't wake up snuggling with it; I didn't bring it to the beach; I no longer skipped over to check on every ding and buzz.

I was released from the pull of mobile technology. It was total bliss.

The week passed. I relished my technological primitivity. I gleefully bragged to people I met that I had no way to contact my family or friends or coworkers; they likely thought I was confused. I could do this forever, I thought.

So I decided to test out a theory. Right before I got back to work, my phone started working again. Ivette, my cab driver, told me this coincidence was the work of a higher power who intuited I had needed a break. And once again, the phone never left my hand. I was back in the throes of tech FOMO — full-on nomophobia.

I gleefully bragged to people I met that I had no way to contact my family or friends or coworkers; they likely thought I was confused.

In the name of experimentation and breaking free from the shackles of the digital world, I asked my editor to let me turn off all notifications. I'd be free from those never-ending reminders of each retweet, email, Slack message, Instagram like, Spotify update ... the list goes on.

Given life's general demands, living completely phone-free was out of the question, but I felt assured that removing notifications from the mix would shift my work-life balance and improve my stress levels. It worked like a charm while I was on vacation, and I was confident the same would happen in my normal life.

I was eager to reclaim my personal time. After all, think of everything you miss when your nose is stuck in your phone.

I consulted friends, who trumpeted the virtues of a notification-free life. One raved about her habit of turning her phone on "do not disturb"; it was the only thing that allowed her to get work done. "I know myself well enough to know that if my phone buzzes, I'll look at it and respond, regardless of what I'm doing at the moment," she said. "If my phone is in my bag and not buzzing with notifications, I'm much more likely to pay attention to whatever is going on in the moment."

I was convinced. It was time to relax. I'd discovered the secret to keeping my head in vacation mode forever.

The experiment begins: On a recent Sunday morning, I turned off all my primary notifications — email, Twitter, Slack — as well as most of my secondary alerts, including Venmo, Instagram, Snapchat and Facebook. (For good measure, I also turned off message notifications.) The only way to see if anyone had interacted with me was to manually visit each app, an act made more difficult given I had also elected to turn off badge app icons.

I assumed that because I would be consciously and carefully selecting which apps to check — instead of being unendingly interrupted by instantaneous and incontrollable alerts — I would feel less obligated to stay tied to my phone, leading to a happier and less frantic version of myself. It was simple: When I wanted to check email or Instagram, I'd do it on my own time, never beckoned by persistent pings.

Initially, it worked. For a half hour, I felt the same as I did while on vacation: elated, free, victorious. But then, when I absentmindedly checked my phone and discovered a series of frantic messages from a good friend, the anxiety set in.

The entire episode was a 180-degree turn from my vacation, which had gone taken me from tethered panic to disconnected calm. Now, what had started off well soon turned to shit.

I felt the same as I did while on vacation: elated, free, victorious. Then the anxiety set in.

Later that day, I went to Brooklyn's Flatbush Avenue Target to buy a few necessities (overpriced conditioner, gummy vitamins and throw pillows). Like on most Sunday afternoons, the store was a zoo: angry parents, pouty children, couples petulantly stuck in stone-cold silence. It wasn't particularly conducive to low stress levels — Target truly has no chill — and as such I ran around its aisles like a chicken with its head cut off.

What made it worse, however, was my infuriatingly silent phone.

Every 16 seconds, I wondered, DO I HAVE A MESSAGE?

I'd just started a conversation with someone on Twitter: DID HE RESPOND?!

I was waiting on an email from Aetna: DID IT ARRIVE YET?

I checked my stupid phone more times in that hour than was healthy or necessary, and I spent more time on it than I would have with notifications turned on.

Over the course of the time I spent notificationless — three days was all I could stand — this happened consistently. I found myself in one of three scenarios, all of which contributed to my stress levels: obsessively checking to make sure I hadn't missed anything; forgetting I wasn't getting notifications and thus scrambling to answer old Slack messages from my miffed coworkers; and daydreaming about when I could warmly welcome the blissful dings and vibrations back into my woeful life.

For me, not knowing is worse than knowing. Living the constantly connected life I was accustomed to was easy to disrupt when I was in an entirely new setting, because nothing was what I was used to — one more new thing didn't make a difference. But when I was back in my normal environment, a shift like disconnecting made a crater-like impact.

I spent more time on my phone than I would have with notifications turned on.

But for others I spoke with — and desperately tried to impersonate, at first — turning off notifications has been a godsend.

"I turned off most of my notifications and I am so, so happy," one of my coworkers told me when I explained what I was doing. "[Constant notifications] just elevated my background stress level so much — which I only noticed once I had turned them off." For her, notifications kept her tethered to the office; shutting them off was the only way to escape.

I could understand the impulse, and certainly, cellphones have done little to improve our collective work-life balance — in fact, a very convincing argument can be made that they have worsened it. But for me, not having my connection switched on fully was actually more detrimental to my own stress levels.

Which is the point: There aren't blanket solutions to these issues. For some people, like my friend and coworker and plenty of others, these disruptions work. They're well suited to them. For others, it's much easier said than done. I wish — fervently — I could live like I did while on a tropical beach. But that's not practical, and it's not worth the time spent trying to shove my square, neurotic pegs into round holes.

Disconnecting is important and can be healthy, but so is understanding the way you work as a human who has a job and a social life and general adult obligations. Neither way is wrong. Do you, everyone.