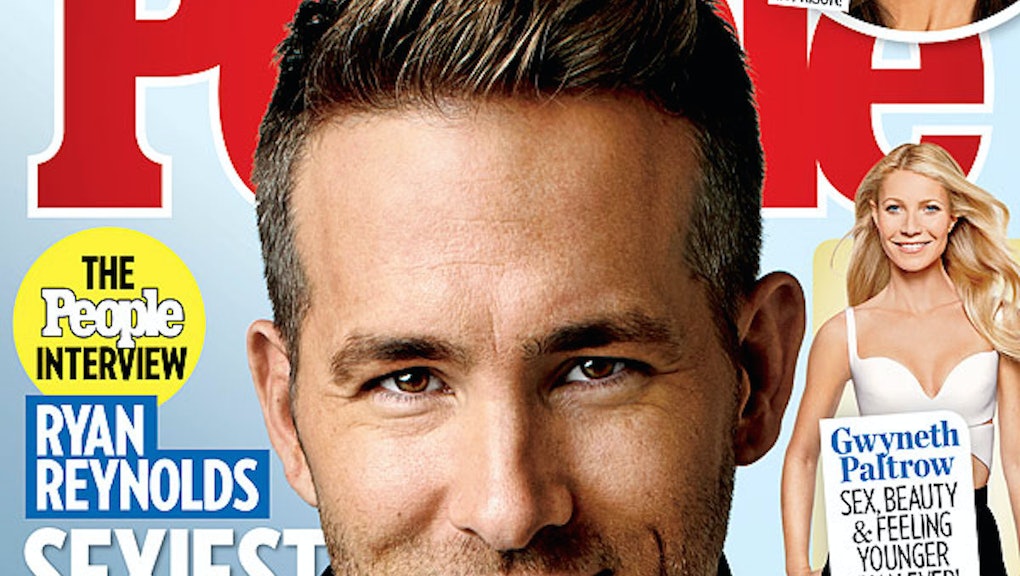 It wasn't all that long ago that Ryan Reynolds was named People's Sexiest Man Alive. But now that he's a father to 1-year-old daughter James, the actor qualifies for a whole new category ranking male desirability: Sexiest Dad Alive. Because, apparently, that's a thing now.

Reynolds' coronation as the hottest celebrity dad, marked by an appearance on the cover of this week's People, certainly isn't the first example of our infatuation with attractive men who also happen to have kids — men whose allure is, in fact, magnified when they're seen with babies strapped to their chests and smiles plastered on their faces.

Singling out Reynolds for a special title because he has a) nice abs and b) a child he loves and cares for, might be a sign that we've reached the peak of our DILF obsession. But it's also a sign of a pretty persistent double standard.

Since then, our reverence for the notorious "mother I'd like to fuck" has inspired everything from the nostalgia-inducing earworm that is "Stacy's Mom" to an entire genre of very popular pornography. It's also ostensibly laid the groundwork for our current adoration for hot dads, a phenomenon that's taken hold a bit more recently.

While the 1980s saw a blip of DILF love, the sexy side of fatherhood wasn't so unabashedly recognized (or fawned over) in pop culture until a few years ago, when celebrity dads like David Beckham, Brad Pitt and, more recently, Ryan Gosling set a new paternal standard. Men like them have inspired memes and trend pieces as well as an entire sub-genre of social media, epitomized by the Tumblr Daily Dose of DILF and the Instagram account DILFs of Disneyland.

The typical DILF is a man who would already be hot on his own, but becomes even hotter upon the birth of his firstborn and hotter still when he's pushing a stroller or changing a diaper. The appeal is rooted in the DILF's proud, public devotion to his kids, which immediately confirms that he's a sensitive, accountable sweetheart who'd probably be down to split household duties in an egalitarian way.

In short, for fathers who are already pretty good-looking, being a shamelessly engaged parent is a quick way to convey that you're also not a dick, thereby increasing your overall appeal.

These kinds of admissions are typically met with swoons, which isn't all bad. We should be enamored of men who love their kids and want to be good dads because it is a sign that they are likely decent humans with feelings.

But to be enamored of them simply because they take parenting seriously implies that DILFs are the exception to the rule: It sets them apart as some distinct, magical class of men that far-and-away exceeds our expectations. As Dave Lesser wrote in an essay for The Good Men Project, glorifying DILFs treats basic parenting as "extraordinary."

It's an entirely different story for MILFs and mothers more generally, and the fact that People didn't also select a Sexiest Mom Alive to pair with Reynolds isn't the only indication.

Sexy moms don't get special titles or recognition for happily taking care of their kids and looking good while they do, because as women they're supposed to be doing both of those things anyway. The remarkable, praise-worthy trait for mothers is their ability to keep their looks. For fathers, the very act of parenting earns them praise — which, as the engaged parent he is, even Reynolds might recognize as troubling.

Surely there are plenty of sexy dads — perhaps including reigning DILF king Ryan Reynolds — who are uniquely appealing and even worthy of praise. But it's not simply because they're hot guys who care about their children.