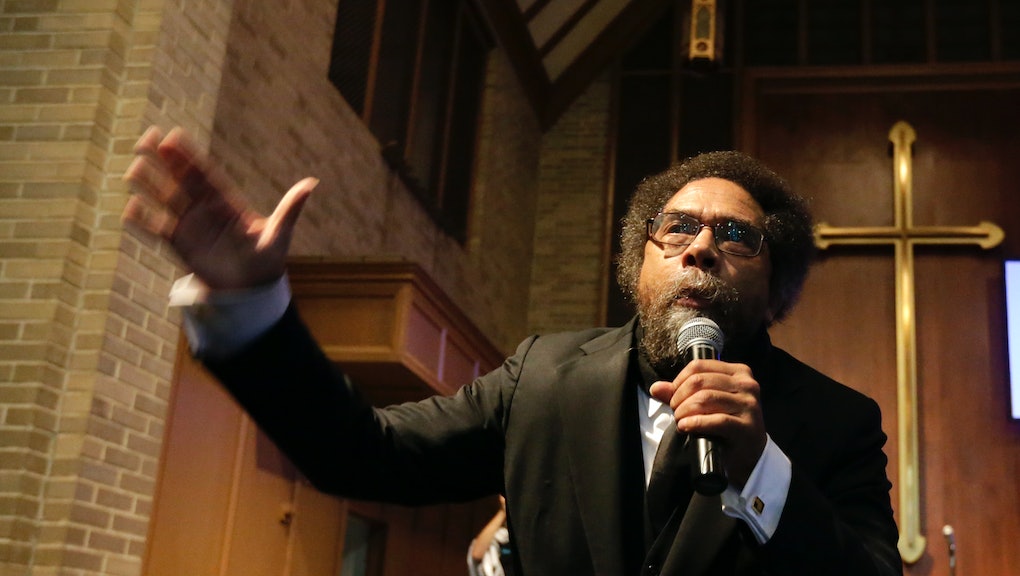 Cornel West, one of America's most influential public intellectuals, has settled on his favorite candidate running for the White House: Sen. Bernie Sanders (I-Vt.).

In a Facebook post Monday, West shared his thoughts on the 2016 presidential race, singling out Sanders and Republican frontrunner Donald Trump as the most electrifying candidates in the field. But he said that only one of them was bucking the establishment for the right reasons.

"Brother Bernie and Brother Trump are authentic human beings in stark contrast to their donor-driven opponents," he wrote. "Yet only Bernie has authenticity and integrity, whereas Trump is for real but not for right."

West described Sanders' focus on inequality as "prophetic," and said that his endorsement was based on the senator's record as "a long-distance runner with integrity in the struggle for justice for over 50 years."

West's seal of approval is a significant development in light of Sanders' rocky relationship with racial justice advocates in recent months. His opinion holds a great deal of sway in the black community, and he's engaged in numerous high-profile acts of civil disobedience in response to police brutality. His backing should provide Sanders with credibility as he takes measures to shift his attention to issues of criminal justice reform.

Mic spoke with West on the phone to ask more about his thoughts on the state of politics in America. He shared his views on what's unique and compelling about Sanders, Hillary Clinton's much-talked about exchange with Black Lives Matter activists, and the irony of Donald Trump's anti-immigrant rhetoric. Along the way, he explained why he wishes that Black Lives Matter disruptions had begun much earlier in the Obama administration, which he has not been hesitant to criticize.

The interview has been lightly edited for length and clarity. We used Genius to add annotations for context, which you can find by clicking on the words highlighted in yellow.

Mic: How did you decide to endorse Bernie Sanders? How do you think of him vis-à-vis Hillary Clinton or Martin O'Malley or the other candidates on the Democratic side?

Cornel West: In a way, it was not too hard because we've got so many mediocre candidates, both in the milquetoast Democratic Party and the decrepit Republican Party.

It's just so clear. Hillary Clinton, she's been an exemplary neoliberal opportunist for a long time. Martin O'Malley strikes me as a kind of dyed-in-the-wool liberal. What we really need is a progressive to hit issues of Wall Street domination of the government. So in a sense it was very easy to endorse Brother Bernie. But we've got to always let him know that we keep the pressure on him.

Keep in mind, we're talking about a two-party system that is just so decrepit in so many ways. Radically inadequate. I was trying to talk about the interplay between the social movements, which is where I spend so much of my energy, and how it relates to electoral and political strategies.

In your endorsement, you said that Bernie Sanders is a "long-distance runner with integrity in the struggle for justice for over 50 years." Yet a lot of Black Lives Matter activists have seen his emphasis on economic equality as either overlooking or downplaying issues of racial injustice. What do you say to those activists who have reservations about him?

CW: It's very important to put pressure on all progressive politicians, no matter what color. But we should always acknowledge that the issue of not just economic injustice, but class injustice, is so fundamental in terms of wrestling with the vicious legacy of white supremacy.

There's no doubt Bernie Sanders and other progressive politicians need to hit issues of police murder and police terror. They need to hit issues of white supremacy across the board. But it's very important never to downplay the critique of Wall Street domination or downplay the critique of capitalism as a whole. In that sense, indeed, Bernie Sanders is a prophetic politician in his critique of Wall Street, in his critique of class inequality and economic injustice.

There's been a lot of discussion about the tactics of Black Lives Matter, and how they're going about holding candidates responsible, by disrupting events by Sanders and others. I'm curious what you think about those kind of tactics in a broader, strategic sense.

I should say this: I wish that we had had a politics of disruption during the Obama administration too. Because it's not as if he's been on the cutting edge of dealing with issues like the legacy of white supremacy. He wouldn't even talk about race with any substance for almost six and a half years. When you get it, of course, it's very symbolic gesture, he goes to a deodorized prison, and only talks to a small number of nonviolent offenders.

It was just three and a half years ago that black leaders emerged out of the White House and [he] said, There's no such thing as a black agenda. That it's all about America. I'm president of all America. I'm not president of black America. There's nothing specific about black people I need to address. Black people are Americans like everybody else.

You had wholesale agreements among the traditional civil rights organizations. Sharpton, the Urban League, the NAACP. Just a few of us were saying, "This is ridiculous. This is pathetic. That there is a racial specificity here." And of course that's exactly what the young brothers and sisters say in the Black Lives Matter: There is a racial specificity that has to do with white supremacy that needs to be addressed.

Obama himself had been pushing this kind of abstract universalism that overlooked the distinctiveness of white supremacist treatment and abuse and of course police murder and police brutality and police terror is one example we could talk about. The privatization of schools, the entire gentrification of black communities. We could talk about the various attacks on black gays and lesbians and trans folk. So that there's a racial dimension that needs to be acted on.

I'm glad to see young activists in the Black Lives Matter movement acknowledging the racial specificity that was completely called into question by almost six years of the Obama administration.

There's nothing wrong with politics of disruption. You just want to make sure you have a moral consistency when you do this kind of thing.

In that vein, Hillary Clinton recently met with a few Black Lives Matter activists at an event in New Hampshire. She made the point that she doesn't really believe in "changing hearts" to bring about change, and she's more interested in changing policy and laws. What do you think of her view of how social change works?

CW: I think that Brother Glen Ford of the Black Agenda Report hit the nail on the head when he said that in that particular exchange, you had the young black activists who were talking very much about a change of heart — her heart. How has your heart changed, since the very ugly 1994 crime bill that you and your husband supported so vehemently?

But when you're engaged in that dialogue with a politician, you've got to lay out your demands. You can't just talk about heart. So she then ends up lecturing them, and I'm thinking, "Oh my God, she's the last person. By what authority is she going to sit there and lecture these black activists when she supported elimination of welfare in '96, or the crime bill in '94?" That was a strategic move by the young people that backfired on them.

I appreciate the audacity of the young folk, because I think the marvelous new militancy in the Black Lives Matter movement is a beautiful thing. And, as you know, it's in no way confined just to chocolate brothers and sisters. You've got a lot of vanilla brothers and sisters who are part of that movement. It's an awakening of the younger generation who are just tired of all of the lies and crimes overlooked by the powers that be.

In terms of specific policies they could have brought up, what do you think of the policies that you think are needed? Some Black Lives Matter activists recently released Campaign Zero, a list of demands...

CW: Yeah, [DeRay] McKesson and the others. I did, I did, and I welcome that kind of specific set of policy demands.

Then we're talking about land, having to do with gentrification. The dispersion of poor people and working people, especially poor working people of color. With this middle-class invasion into the cities. It's a land grab. It's a power grab that dissolves communities that too easily disperses people on just the market logic as opposed to democratic logic.

So the basic kinds of issues here have to do with just jobs with a living wage, quality education, decent housing. Trying to hold off this market-driven transformation of communities called gentrification. I'm just glad to see Brother Bernie is very much aware and speaking to some of these things, and I think he'll continue to speak with real power to these issues.

One divide we've seen in the conversation about Sanders is between those liberals who emphasize racial aspects of inequality, and those on the more traditional, socialist left, who tend to emphasize issues of class. But talking about race and class aren't mutually exclusive. How do you bridge that gap?

CW: We've been wrestling with this question for many, many, many decades. For me, the issue of class is so fundamental — having to do with resources and asymmetric relations of power at the workplace, bosses versus workers. Therefore I can't conceive of talking about struggling against white supremacy without talking about class.

Twenty-five years ago, people talked about it in terms of fighting for radical democracy. Once you have the empowerment of everyday people across the board, then you're able to wed what people traditionally call "identity politics" with what people call "class-centered politics" because the two are so inseparable that you can't talk about one without the other. I think there's something to be said for that position.

Speaking of xenophobia, one last question. What do you think is fueling Donald Trump's rise? Why do you think he's doing so well and seems not to be going anywhere anytime soon?

CW: I do think that Brother Bernie and Brother Trump share one thing in common: They speak to the anti-establishment impulse among those who are looking for some candidates who are for real, as opposed to the superficial, donor-driven politicians that usually are dominant in any election cycle.

I think the problem, as you can imagine, is, with Donald Trump, you've got somebody who is xenophobic shot through with a nativistic hostility toward immigrants. I mean, these attacks on our precious Mexican brothers and sister are just pathetic. Nobody really wants to talk about his blessed mother, Mary Anne with an "e" who was born in Scotland, or his grandfather Friedrich Drumpf — D-R-U-M-P-F. Trump is an Anglicized name from "Drumpf," but his grandfather arrived in 1885 from Germany, and if the nativistic voices had been in place when his grandfather or when his mother arrived, they never would've got here.

I come from a people who have been here for 400 years. Black people built America in so many ways, along with white immigrants. But especially the slaves' free labor built America. It's just amazing to me that somebody like Trump — who just got here — becomes, in his mind, the definitive definer of who ought to get here.

The same is true in terms of his complicity with plutocratic corruption. He says, I have been a donor, I have been a participant in this corrupt system for 30 years. But all of a sudden now he's going to make America great again?